Review: “Once Upon a Time in Venezuela” Is an Immersive Dive Into a Vanishing Village

Anabel Rodríguez Ríos's documentary "Once Upon A Time In Venezuela" beautifully depicts a village that offers a microcosmic view of Venezuela's broader political challenges.

The title Once Upon A Time in Venezuela brings to mind images of a bygone fantasy world. While the stark images in this documentary are real, it is a fantasy in a sense—the village of Congo Mirador no longer exists.

Congo Mirador was a village in the middle of Lake Maracaibo in Venezuela. The houses stand on stilts, perched above the murky waters of the lagoon. Once upon a time, nearly 1,000 people lived in the village, which bustled with fishermen and tourists coming to see the silent Catatumbo lightning.

At the start of the documentary, Congo Mirador is a rotting reflection of its former self. Only 30 families permanently live there and many of these are thinking of leaving. In recent years, pollution, neglect, and corruption have forced its inhabitants to abandon it—a striking metaphor for Venezuela itself.

The Crisis in Venezuela

For the last decade, Venezuela has been in a state of socio-political and economic crisis. Rapidly increasing hyperinflation has crippled the economy, leading to power shortages, widespread malnutrition, and lack of sustainable healthcare. Nearly five million Venezuelans have left the country in recent years, a migration crisis of unprecedented scale in the region. Politically, the country remains divided, as both Nicolás Maduro and opposition leader Juan Guaidó continue to claim the presidency.

This political division has roots all the way down to Congo Mirador. Once Upon A Time in Venezuela focuses on two main characters—Tamara, the local Chavista government representative, and Natalie, who opposes Chavismo while working as the only teacher in the village. As the 2015 national parliamentary elections approach, Tamara tries to ensure votes by any means necessary, while Natalie faces increasing political pressure to quit her job.

Even while political divisions shake Congo Mirador, there is a larger crisis at hand. Congo Mirador sits in Lake Maracaibo, Venezuela’s primary source of crude oil. The water is a filthy, opaque, brown colour and children splash around in old oil barrels transformed into makeshift boats. In addition to the pollution, sedimentation has decreased water levels. This environmental crisis puts new pressure on Congo Mirador, as villagers watch their livelihoods dry up. Despite their cries for help, the government has not invested in the dredging project. They appear to have no interest in saving the town.

Once Upon A Time in Venezuela is the directorial debut of Anabel Rodríguez Ríos. Originally from Caracas, her relationship with Congo Mirador started with the short film, The Barrel (viewable for free here), a touching vignette about a boy and his barrel boat. This short is actually stronger than the full documentary, due to the tight narrative and the powerful contrast between the boy’s simple pleasure and the corrupt resource extraction threatening his community.

Ríos uses a fly-on-the-wall style to immerse the viewer in the life of Congo Mirador. At times, this can make the film feel a little unstructured and confusing—the lack of context or explanation requires that the viewer already be familiar with the situation in Venezuela and places the responsibility on the viewer to connect all of the dots. However, this style of documentary filmmaking also allows the images and characters to speak for themselves.

They say a picture is worth a thousand words, an idiom which speaks to the power of documentary films. Filled with moments of metaphor, this film is no exception. Silent lightning rages above the fading village. An old man in Congo Mirador speaks of a bird trapped in a cage, saying “look at him. He just wants to die.” A political official covers her ears and turns away as a squealing pig is butchered. Images like these imbue the documentary with a sort of poetry; even without explicit explanation, you understand.

These moments of metaphor are aided by the cinematography, which looks strikingly beautiful at times. Children play amongst abandoned houses, as the moon reflects off the filthy water. The camera whisks the viewer along, just above water level, racing through the sedimentation and plants that are choking the lagoon. These small moments are where the film succeeds.

One of the most powerful scenes is when Tamara finally goes to Caracas to speak to government officials. We see her get ready, putting on her fanciest clothing and explaining how this is a pivotal moment, “like when Obama went to Cuba.” Sitting in the meeting room, she is nearly overcome with nervous anticipation and excitement. Yet, as she emotionally explains the problems that are threatening Congo Mirador, the governor ignores her and answers a phone call. The government does not care about the problems of Congo Mirador. There will be no meaningful change. Both a victim and wielder of political corruption, Tamara cannot save Congo Mirador.

Ultimately, Once Upon A Time in Venezuela is not an uplifting film, but it is not bleak either. Instead, it has beauty similar to a funeral elegy. It is an immersive documentary about a dying Venezuelan village and a striking portrayal of a country drowning in corruption, pollution, and poverty. Though the lack of overt narrative and contextual explanation demands a lot from the viewer, the film’s power lies in its authentic portrayal of Venezuelan life and in its metaphorical resonance. 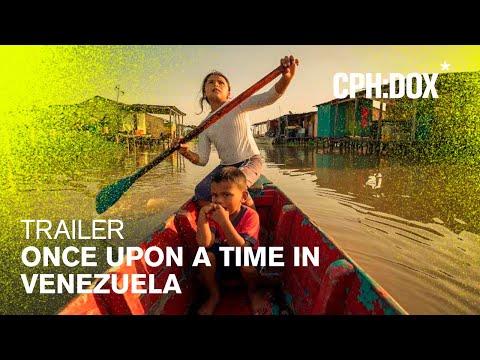 Once Upon A Time In Venezuela will screen at the Vancouver International Film Festival 2020. More information about upcoming screenings at other venues is available here.