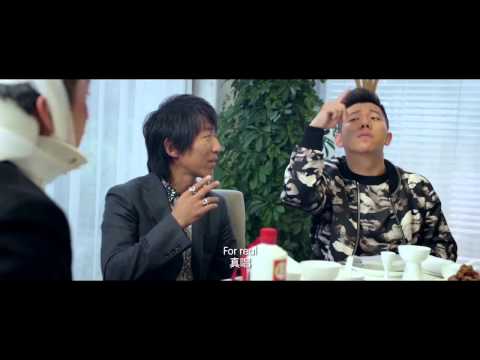 Move over, Captain America! China’s got a superhero now! His name? Jian Bing Man. By day, he’s a bumbling comedian, trying to win back his girlfriend. By night, he’s the defender of innocents, fighting for truth, justice, and the hexie shehui!

Well, the 2015 Chinese blockbuster Jian Bing Man isn’t actually a superhero movie per se; it’s a superhero parody movie. So sorry, China doesn’t actually have a full-fledged superhero just yet. Our eponymous fake superhero is the fantasy of Da Peng, a comedian in Beijing (played by real-life Chinese comedian Da Peng, who’s famous for ripping off US TV host Conan O’Brien). Just as Da Peng is about to propose to his girlfriend, he causes a scandal in a nightclub and loses both her and all his acting jobs. To make matters worse, he borrowed 10 million RMB from a gangster to buy an engagement ring, only to lose that ring in the nightclub too.

When the gangster comes knocking, Da Peng claims that he’s invested the 10 million into a new film. Forced to live out this lie, he decides to recruit a motley crew of friends and amateurs to make a movie based on his childhood dreams of becoming a superhero named “Jian Bing Man” (named after jian bing, a popular Chinese crepe-like food).

Hilarity ensues. Lacking funds, Da Peng puts on a superhero costume himself and resorts to guerilla tactics to obtain footage. First, stalk famous actors. Second, lure them into staged dangerous situations. Third, parachute Jian Bing Man in to save the actor, catching it all on hidden candid camera. It’s so stupid it’s brilliant.

Needless to say, Jian Bing Man isn’t a highbrow film. Much of its humor is physical and visual: the ridiculous costumes, people hiding behind bushes. It decidedly caters to mass audiences, gathering cameos from a litany of famous Chinese actors and even Western action hero Jean-Claude Van Damme. And hey, it worked — Jian Bing Man was the fifth-highest grossing domestic Chinese film of 2015. All this also makes the film quite accessible for foreign audiences — even if you attend a screening with horrible subtitles, you can still laugh at Jian Bing Man’s antics.

At the same time, I sense another layer to the film. Though obviously influenced by American blockbusters, Jian Bing Man doesn’t try to exactly replicate the neanderthalic inanity of Transformers or the trope-ish bombast of Marvel movies. Rather, it constructs an amusing, but incomplete, vision for what “superhero with Chinese characteristics” might look like.

If Captain America embodies America’s post-WWII self-confidence and desire to police the world, Jian Bing Man parodies the moral vacuity of contemporary China. The entire film floats on an ocean of materialism — diamond engagement rings, fast cars, gangster-hosted banquets. Its conflicts — and resolutions — arise only as a result of celebrity culture run amok. Da Peng’s film within a film is a hodgepodge of fakery, a masterful parody-within-a-parody of how, in China, nothing is true yet everything is possible.

Jian Bing Man probably didn’t set out to convey any political messages though, and indeed offers no overt satire (how the hell else would it earn so much money)? Nevertheless, in broaching a genre so traditionally conflated with defending ideals like “democracy” and “justice”, it unintentionally dips into murky waters.

What does Jian Bing Man fight for, you might ask? Well, as Da Peng screams (and the film’s English trailer pronounces in all its untranslated glory), he fights for a hexie shehui — a “harmonious society”, introduced by former Chinese leader Hu Jintao as a vision for China’s economic and social development.

So is Jian Bing Man a fake superhero fighting for a real ideal, or a fake superhero fighting for a fake ideal? Who knows? Can China ever make a non-parody superhero movie? That’s a discussion for another time. But whatever the answer, I’m glad that we have Jian Bing Man coming around to save us all from boredom and the monotony of non-stop Hollywood superhero blockbusters. We might not have an actual Chinese superhero today, but this parody is pretty damn entertaining by itself.