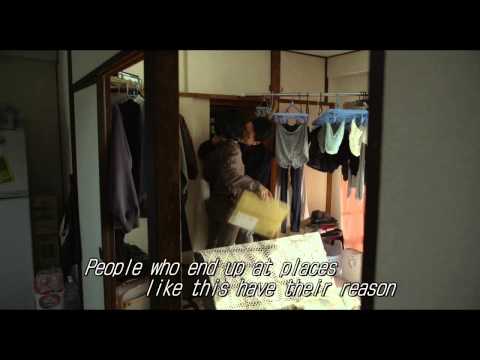 Steamy sex scenes, dark secrets, and broken dreams —“pink film” kingpin Ryuichi Hiroki does it again. A multi-threaded drama featuring a Korean call girl, an aspiring idol, a runaway thief, and a dejected hotel manager ,  Kabukicho Love Hotel does well to intrigue and sympathize with its broken characters and their dilemmas over a 24-hour period.

Always interesting but a tad sentimental, our tale follows the stories of five different “couples” engaged in dubious acts that ultimately find their way to the eponymous Atlas Hotel in Tokyo’s raunchy red-light Kabuki-cho district.

First we’re introduced to Toru (Shota Sometani) and his aspiring pop idol girlfriend Saya (Atsuko Maeda, from AKB48), whose relationship has run dry as Toru’s desire for sex has disappeared. Fired from his front desk job at the Grand Pacific Hotel, Toru secretly takes a manager gig at the Atlas Hotel without telling Saya. To add to Toru’s plight, his family was devastated by the Tohoku earthquake of 2011. Gloomy and expressionless, mop-top Shota Sometani does a fine job of portraying Toru as stuck and dispirited.

Next we’re introduced to Hena (Lee Eun-Woo), a Korean call girl and her chef boyfriend Chong-Su (Son ll-Kwon), who doesn’t know the true nature of Hena’s occupation. Chong-Su isn’t without secrets of his own, secretly sleeping with an older Japanese woman on the side for extra money. Both Hena and Chong-Su want to go back to Korea to follow their dreams of opening a boutique store and soba shop, respectively. Hena’s interactions with her clients are rich and interesting — mostly buoyed by Lee’s excellent acting —but never go beyond the hooker-with-a-heart-of-gold cliches. Chong-Su does have lingering suspicions about Hena’s occupation, as he’s surprised about how she has so much money.

Next we follow a homeless teenager Hinako (Miwako Wagatsuma), who’s picked up by Masaya, a recruiter of prostitutes for the Yakuza. This story initially held promise, but quickly succumbed to mawkish melodrama when Hinako wins Masaya over with her sob stories of a broken home. Also interesting is the story of Satomi, the hotel’s middle-aged maid whose involvement in a crime 15 years ago kept her and her partner in hiding ever since. She only has a few days left before the statute of limitations on her arrest expires.

Our main dilemma leads back to Saya, who enters Atlas unaware that her boyfriend works there, with a music executive who’s promised to give her a record deal if she sleeps with him. I can’t help but find the coincidence of Toru’s sister and his girlfriend in the same hotel a bit far-fetched, but suspending logic for this movie will serve you well. Toru’s reaction to seeing Saya is a sad mix of acknowledgement and frustration. We’re also introduced to a married cop named Rikako, whose off-duty meeting with a colleague gets complicated when she spots Satomi on the lam.

Incredibly intricate yet never too complex, our web of stories share not only Atlas, but broken characters trying their best to live. Toru works at a love hotel, Mayu’s become a porn star, Hena works as an escort, Satomi’s on the run from the authorities, and Rikako is sleeping with her boss. None of our characters are wandering aimlessly, everyone’s working towards a better future. Toru wants to work at a 5 star hotel again, Hena wants to open a boutique with her mother, Satomi wants to live peacefully after 15 years of hiding, Rikako wants to do her best as a detective, and Mayu simply wants her own freedom.

It’s also interesting to note that Japan is a society of extreme conformity — and our characters are on the fringes of this society. They all want to lead respectable lives, but Japan’s social limitations have clearly edged them out. I get a sense of isolation from each of these characters since they’re separated from the norm, but also a sense of kinship. The love hotel represents a safe haven, free from the expectations of society.

At the same time, Director Hiroki explores the theme of moral decay and the materialistic nature of reality. Our characters are all involved in some form of crime (adultery to murder), and largely for materialistic reasons (money or promotions). As an aspiring capitalist, the acknowledgement of a materialistic reality is music to my ears, but I can’t help but feel a lingering sense of disappointment as well.


Support the moviemakers and help us pay our bills! Buy a copy of this movie with our affiliate link. Thanks for your support!