"The Second Mother" is one of the most deservedly acclaimed films to come out of Brazil in 2015. 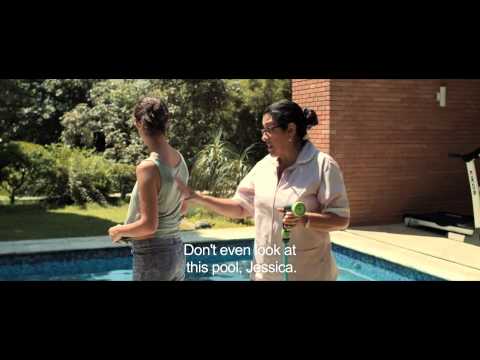 One of the most deservedly acclaimed films to come out of Brazil in the past year is The Second Mother, which centers around a live-in housemaid for a wealthy family in  São Paulo. Val, the housemaid, has worked with the family for almost two decades, not only performing housework but also becoming a surrogate mother for their only son, Fabinho. However, her work comes at immense sacrifice: she’s had to leave behind her real daughter, Jessica, in her northeast Brazilian hometown (far from São Paulo). Val hasn’t seen Jessica for ten years.

Then, on the cusp of adulthood, Jessica re-enters Val’s life. She asks Val to stay over in São Paulo in order to study for her university entrance exams. After securing permission from Dona Barbara, the family’s matriarch, Val acquiesces to her daughter’s request.

Upon arrival, Jessica touches off a cascade of tensions within the household. She’s resentful that Val has been absent in her upbringing, and shocked to realize that Val chooses to live as a second-class citizen. When Val tries to impress upon her the unwritten social divides of the household, Jessica refuses to listen. Instead, she actively subverts those rules, eating Fabinho’s favorite ice cream and winning favor with Don Jose, the father, as a peer. This behavior upsets both Val and Dona Barbara.

Given its plot, the film obviously contains messages about class divisions and social inequality. However, while other movies can get preachy or annoying with those topics (ex. Niel Blokamp’s sci-fi flop Elysium), The Second Mother provides a rather nuanced and artful take on them. For one, architecture is both a theme and technique in the movie. Jessica, determined not be treated like her mother, is applying for the University of São Paulo’s Faculty of Architecture. “It’s the best way to bring about social progress”, she declares.

Most of the movie occurs within the confines of the family’s modernist mansion. Both mentally and visually, the mansion is a divided space. There are places that Val belongs to (her cramped quarters, the kitchen), and places that she’s restricted from (the swimming pool). Here, architecture is a language that manifests the hidden social codes the house’s human inhabitants live by. It’s a subtle, yet powerful, visual metaphor that requires some thought to spot and appreciate. At face value you see a pretty mansion with pretty paintings. On a second look, there’s something more.

The film is a master of layering and subtlety in areas beyond visuals and the theme of architecture. As you keep watching, the title starts to have more meaning beyond the obvious. In fact, the film has a different Portuguese title as well — “Que Horas Ela Volta?”, literally translated as “When is She Coming Back?”

Amidst all the richness, The Second Mother remains a highly accessible film. Even if you strip away all this talk about architecture and titles, it tells a poignant and relatable human story. Contrast that with the South Korea’s The Housemaid (both the 1960 and 2010 versions), my most immediate reference point for movies starring live-in maids. While The Housemaid tells its story through darkness and fear, The Second Mother deploys more delicate and dramatic methods, becoming something closer to Singapore’s Ilo Ilo.

The Second Mother is a Goldilocks film — not too dark or devastating, and not too giddy or preachy either. It’s at equilibrium; it’s just right.