Review: They Call it Myanmar – Lifting the Curtain (United States, 2012) 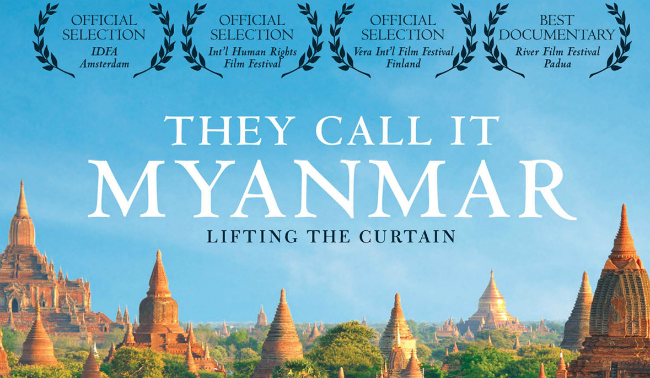 Robert H. Lieberman’s They Call It Myanmar: Lifting the Curtain is an exceptional layperson’s introduction to modern Burma and its tribulations. However, those who desire more narrative complexity and a spark for their curiosity may leave somewhat disappointed.

It is easy to see why They Call It Myanmar maintains a 100% rating on Rotten Tomatoes. The film’s narrative progression is highly approachable. Its footage, shot clandestinely over two years, captures poignant images of young children and stoic monks. Lieberman, a Cornell lecturer who went to Yangon to teach film and help produce public health ads, weaves together those images into a comprehensive account of contemporary Burma, complete with an interview with Aung San Suu Kyi and footage of both the 1988 and 2007 uprisings. To the average American viewer, Lieberman’s film not only brings necessary informational clarity, but also tugs at heartstrings.

This tugging, however, prevents viewers from reaching any novel philosophical apotheosis; They Call It Myanmar is no The Act of Killing. At times, it feels like Lieberman’s approach is formulaic, and he is simply checking off action items. Child laborers? Check. Girl suffering in clinic? Check. Renowned pro-Western, English-speaking democracy activist? Check. Yes, such plot points bring valuable insight. Still, the documentary’s prevailing moral seems trite: “things are bad, but let’s hope the youth will make things better.”

Part of this opinion comes from personal bias, but I believe Lieberman’s narrative has an over-reliance on children. Children are a double-edged sword. They are a surefire method to move Western audiences. But applied liberally, they could come off as convenient tools in yet another moralizing white man’s third-world sob story. Fortunately, Lieberman moderates himself away from creating a lurid cryfest, but at times, for instance when he shows successive clips asking working kids their ages, he leans ever-so-slightly towards one. Obviously, child labor is not good. Focusing too much on “the children”, however, risks trivializing Burma as just another starving third-world basket case.

That, Burma is not – its problems are more diverse than simple poverty; there are ethnic conflicts, resource disputes, and more. Admittedly, Lieberman probably aimed to “lift the curtain” just a little bit rather than all the way, and it would be unfair (and perhaps impossible) to except him to accomplish the latter.

With that limited scope, They Call It Myanmar “lifted the curtain” rather well. But it could’ve done better by going beyond standard messages of “democracy” and “youth”, and leaving its audience with a thirst for more.

Review: Sleepwalk with Me (United States, 2012)

Review: Sleepwalk with Me (United States, 2012)