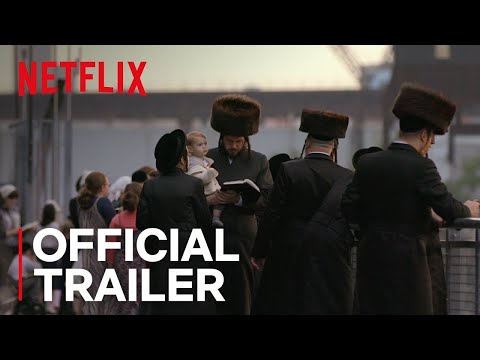 The Hasidic Jews of New York, ultra-Orthodox communities based mostly in Brooklyn, are essentially a European phenomenon. They speak Yiddish at home, and actively reject the trappings of secular modernity, wearing Old-World garb and eschewing contact with secular New York. It is a stark irony that they live in the world headquarters of modernity.

In his eponymous 2017 film, director Menashe Lustig explores the social dynamics within the community, taking for granted the rigid restrictions and social mores of the sect as the backdrop for his fictionalized memoir. The titular character is in the margins of Hasidic society, but he never tinkers with the idea of actually leaving the insular community.

The Netflix Original documentary One of Us, which came out several months after Menashe, scrutinizes the taboo of those who do dare to leave and their sudden struggle to understand a modernity that has been hidden from them.

Those who stray are said to be “off the derech” or “off the path,” abbreviated as “OTD.”

Chani Getter, a representative from Footsteps, an organization dedicated to helping those transitioning away from Hasidism, explains in the film why some people need to flee the lifestyle. Hasidism is largely a response to the Holocaust, and takes as an assumption that Jewish integration is dangerous. She describes it as “an entire community built on survivors with trauma, and they bring that in.”

The film highlights the stories of three OTD young people, each with their own reason for leaving.

Ari Hershkowitz told stories of childhood sexual abuse, and his mounting doubt as religious leaders condemned (and failed to answer) his questions. He recounted the tribulations of entering the secular world as a kind of self-referential treadmill of confusion – he didn’t know to Google how to Google because he didn’t know what Google even was. His upbringing was designed precisely to make him fail outside of the environment in which he was raised, and the day he discovered Wikipedia was “a gift from God.”

Still, he is at the mercy of others in helping him learn the nuances of modernity. He carries around an old driver’s license with a photo of him with peyos, and he points to it saying, (to paraphrase), “This is what I used to be – help me understand.”

The gender gap that defines much of Hasidic life is evident in those who abandon it too, and in Etty Ausch’s case, it was the danger of womanhood that forced her out.

Oppressive religious laws gave her no legal recourse in her abusive arranged marriage, where turning to the police would mean incurring the wrath of the entire community and enduring unbearable ostracism. Because leaving the faith completely upends the standard of “status quo” that can earn a parent custody in divorce cases, Etty was forced to either endure her husband’s mistreatment, or embark on a new life, alone, and with almost no access to her children. She chose the latter, bravely, and the documentary did a remarkably good job of capturing the tenderness and pain of that decision.

The third case study was Luzer Twersky, who sought participation in the secular world after years of preoccupation with secular movies. He’s a little further in his transition, and notes that he feels like a normal dude, not an ex-Hasid. That said, he still uses words like “draydlekh” to describe small money-making gigs, where more “mainstream” dudes might choose a word like “side-hustle.”

Perhaps the recent fascination with Hasidism is for anecdotes like that; I personally am almost incredulous that for Hasids, English really is a second language, and American culture — if they get exposure to it — really is a second culture, even though they dwell in the heart of it.

Twersky has been moderately successful as an actor, mostly taking roles portraying Hasids, which has been his transition plan (a plan even he admits is a little meshuga). He recently appeared in Season 2, Episode 4 of HBO’s High Maintenance, called “Derech,” in which he plays a character whose history is not unlike Twersky’s own. The episode is acted by many Hasids and ex-Hasids, and the scenes that portray Footsteps meetings are remarkably faithful to real conversations that appear in One of Us.

I won’t give away the ending, but it’s worth a watch. The often harrowing experiences of the OTD community are compelling, acrobatic feats of epistemic and cultural adaption. It is surprising that there has been so little to document their journeys until this recent surge of interest.