Pilot whale hunts are a long-held tradition in the Faroe Islands. Challenges to the hunt on the basis of mercury poisoning bring up deep questions of regional sovereignty that go far beyond the island country. 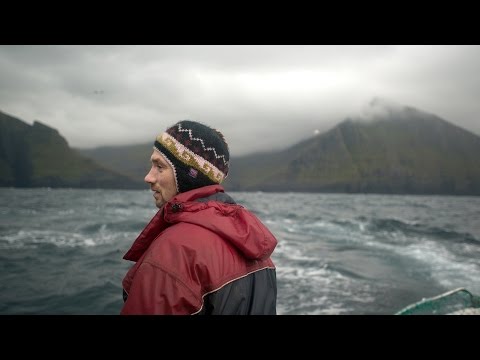 ARNISDALE, SCOTLAND — What are called sea-lochs here in the Highlands are more commonly known as fjords in English or, in the Faroese language, fjørður. The landscape of the Faroe Islands, a small archipelago between Iceland and Norway, isn’t too different from its southern neighbor, Scotland.

At a community center in Arnisdale called “Cèilidh House” (cèilidh is the Scots Gaelic word for “party”), the film The Islands and the Whales was screened to an audience of about twenty. That’s pulling a fairly large crowd, considering the permanent population of the village is about thirty, with a single road connecting it to several nearby villages.

The Islands and the Whales explores the quandaries of grindadráp, a centuries old Faroese tradition of pilot whale hunts. High mercury levels in Faroese people, linked to slowed brain development and neurological disease, have called into question the safety of eating whale meat and blubber, staples of the Faroese diet.

Animal rights groups have also protested the spearing of the highly intelligent species. But whale hunting is a tradition that has lasted over 700 years in the Faroes; it is central to Faroese identity. And coming by food by other means isn’t easy in the cold climate and on the volcanic soil. Virtually nothing grows in the Faroes, so residents rely on seabirds like puffin, fulmar, and gannet; dried or salted fish; and whale.

Scotland isn’t exactly the Faroe Islands. Scottish cuisine, while not yet the envy of the world, is making a name for itself (and at least has the basic luxury of Tesco). The Highlands are usually associated with Celtic culture, not Germanic conquest, in the popular imagination.

But Nordic peoples settled in Scotland, just like in the Faroes. Germanic place names like “Arnisdale” still abound.

Watching the film in this coastal hamlet, I was out of my element—everyone else in the room could intimately relate to the landscape, the climate, and to some extent the culture of Faroes, more than I could as an out-of-the-box urbanite from the New World.

There are more fundamental ways in which my fellow viewers could identify with the interviewees in the documentary more that I could. The man sitting directly in front of me was a longtime langoustine fisherman on Loch Hourn, the fjord to our South, flush with shellfish that is sold in southern Europe, where waters are too polluted to meet local demand for shrimp. He just sold his boat and his fishing license, choosing retirement before the uncertainty of Brexit reaches the Scottish coast.

The economics of that are complex.

To add to the complexity: Scotland voted overwhelmingly against Brexit in 2016, but the U.K. as whole voted for it. In 2014, Scotland voted narrowly against its own independence, a no-vote that could have easily gone the other way had the country foreseen which way the Europe vote would fall. In much of the Highlands, the sentiment is a yes to Brussels, and no to Westminster. Many Scots feel disillusioned with their lack of agency.

Unsurprisingly, so do many Faroe Islanders. On one hand, they are victims of environmental damage caused by an unfeeling global economy. On the other, their way of life is being challenged and even condemned, mostly by outside forces.

Their paranoia was described by one Faroe Islander in the film as a resentment of cultural imperialism. Many don’t believe that mercury is dangerous.

One of the interviewed was Pál Weihe, the physician who ran the study of mercury levels of whale-eating Faroese. His task, as a Faroese himself, is to convince his countrymen that the stuff really is bad for them, all while coming to grips with his own dismantling of the islands’ cultural heritage. The only thing that gives him credibility is his status as a local.

There are fascinating intersections to be found in the strange case of pilot whale hunting. Health and safety hazards, environmental catastrophe, cultural preservation, animal welfare, and the changing global economy all coalesce around the grindadráp. Even as a study in regional controversy, the story alone is rich enough to warrant exploration.

The Faroes are an autonomous country within the Kingdom of Denmark. They declined to be part of Europe when Denmark joined. Scotland is a semi-autonomous country in the United Kingdom, voting to remain in Europe while England and Wales voted it out.

In this era, which geographic allegiance should take precedence? Things like fishing rights issues are important in themselves, but they are even more pressing as platforms for the global conversation about how a world of stacked identities will function politically, and how we as individuals will cope.

The Islands and the Whales features beautiful landscape shots of the remote archipelago, and gritty clips of seabird processing plants. Of all of the shots that stuck with me, though, the most prominent may have been the image of the light-speckled nighttime skyline. The Faroe Islands saw the construction of their first road in the 1950s—now they are bathed in light pollution.

I can imagine a time when there were dark nights on Loch Hourn, too.

On the drive home to Glenelg, just a few miles away, I sat in the backseat with my two hosts. One of them noted from the passenger seat how special it was to walk out from a film like that into the similarly austere Scottish landscape. She motioned to the tri-color sunset glowing on a glen.