Review: “Exes Baggage” Explores The Before, During, and After of Relationships

Exes Baggage reminds us to be thankful for the lessons our previous relationships taught us, and not be afraid to love again 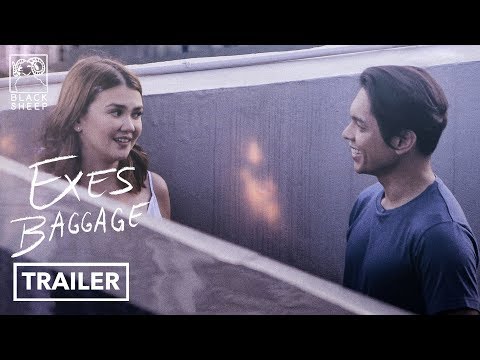 Filipino studio Black Sheep’s first film, Exes Baggage, is a romantic comedy that explores relationships across all their stages—before, during, and after—with all the happiness and tears in between.

Exes Baggage marks two milestones: the long-awaited movie for the former loveteam, “CarGel” (Carlo Aquino and Angelica Panganiban), who captured the hearts of Filipinos during their youthful days in hit teen show, G-mik. Exes Baggage marks the reunion of the pair. For fans of this much-loved duo, the film promises a lot of nostalgia.

Helmed by renowned Filipino rom-com director Dan Villegas, Exes Baggage is about two former lovers who meet after years apart, at the opening party for their friend’s bar.

The first half of the film keeps the audience dangling between the present time and glimpses at the past. The film follows a non-linear narrative that combines flashbacks with moments in the present, making the audience wonder, “what went wrong?” —  especially when the former couple seems happy to see each other again.

Exes Baggage is very much a story of CarGel told from another perspective. The two leads were former lovers during their teens in real life, reunited again years later in cinema; similarly, the film parallels this with Nix and Pia’s relationship, as we see their reunion reminding us of Aquino and Panganiban’s.

As a romantic comedy, the film focuses on second chances, the pains of love, and the need for honesty in a relationship — not just towards your partner but also to yourself. Much to the film’s title, it also looks at how previous partners can affect a present relationship, touching on not only the couple’s way of moving on and being happy but also the individual’s own process.

Is an ex-partner just extra baggage? Or can we learn from them no matter how good or bad the relationship was? Exes Baggage shows us the answer is the latter.

There are numerous scenes in the film showing Nix and Pia happy together, but a deeper look inside reveals that they are quite insecure. Pia fears that she is not elegant or “sosyal” — a Filipino term for a person who is classy or wealthy — compared to Nix’s former girlfriend, because Pia parties a lot, smokes, and stays out late. In one heated scene, Nix objects to a revealing dress that Pia plans to wear to a meeting with his mother — highlighting the tensions in a relationship that arise from differences in the individual.

But despite that, Exes Baggage doesn’t seem to offer anything novel in terms of a love story. The plot still follows a very classic pattern of romance stories: insecurities, pain, and moving on —  facets that come with every relationship.

Cinematically, the film exudes an indie vibe, but the editing feels awkward and sloppy. Beyond that, the film is very talkative, with some pretty cheesy (though funny) dialogue at times. However, compared to other mainstream romantic comedies in the Philippines, Exes Baggage isn’t too sappy and melodramatic. It has its mix of honeymoon and tragic moments that highlight the skill of their actors.

The film appeals to a feeling of familiarity and that’s something that the Filipino masses will be comfortable with. For an international audience, the nostalgia here is foreign but the direction of its romantic narrative is not. And the film’s message — that we can learn from our ex-partners — is universal.

At the end of the film, Exes Baggage reminds us to be thankful for the lessons our previous relationships taught us, and not be afraid to love again. In fact, when the film was released locally, it actually encouraged you to watch it with your ex-partner.

In one of Pia and Nix’s conversations, Nix asks if she’s afraid of love. She said, “no — I think that the people who are afraid to love, because they’ve been hurt by love, didn’t really love in the first place. Love should overpower pain.”

This line is particularly powerful when delivered by Panganiban, who in real life just ended her relationship because her ex-partner ran off with another woman. Despite that, she said in an interview: “I’ve forgiven him. I hope he got what he wished for. It’s important that he’s happy, that they’re all happy. I’m proud of all the people I’ve loved. And now I’m okay and I’m whole again.”

Why I Show Raoul Peck’s "Lumumba: La Mort du Prophète" To My Students

Why I Show Raoul Peck’s "Lumumba: La Mort du Prophète" To My Students