The drug trade has been a source of ideas for countless crime movies and television shows. Recently, a number of movies and shows have focused on the drug trade in Latin America, including Sicario, Breaking Bad, and Narcos. Pájaros de verano (Birds of Passage) represents a unique take on the Colombian drug trade by offering an alternative to the tropes and clichés often used in narco movies. Instead of relying on violent thrills and using the police as the antagonizing force, the film gives us a deeper understanding of how crime and violence impact the communities where they begin.

Pájaros de verano is a film that spans the late 60s through the 70s, as we follow the early days of the drug trade in Colombia. It is centered on a tribe of the Wayuu people, an indigenous group in northern Colombia and northwest Venezuela. It specifically follows the family of Rapayet (José Acosta), his wife Zaida (Natalia Reyes), and Úrsula (Carmiña Martínez), who acts as the head matriarch of their tribe. When Rapayet lacks the dowry to pay for Zaida’s hand in marriage, he begins to sell marijuana to Americans, drawing his family into the illegal drug industry. This decision ultimately impacts Rapayet and everyone around him in ways that he could never imagine.

The film opened the 50th Directors’ Fortnight at the 2018 Cannes Film Festival and has been shown at festivals around the world, including the Sundance Festival and Panama International Film Festival. It was also put forward as the Colombian entry for the Best Foreign Language Film at the 2019 Academy Awards and was a New York Times’ Critic’s Pick.

Though the film has received high levels of acclaim, the filmmaking process was anything but smooth. In fact, Colombian director Ciro Guerra and his wife, co-director and producer Cristina Gallego, ended up getting divorced during the filmmaking process after more than 20 years of marriage. However, they continued to work on the film together, finally finishing a project that began when Guerra and Gallego made contact with the Wayuu people over a decade ago. The finished product is a visual masterpiece, with strong acting and a storyline that goes against mainstream movies and television shows about the Latin American drug trade.

No Police, No Glamorized Violence

One way in which Pájaros de verano radically differs from the vast majority of movies and shows about the drug trade is the lack of police presence. This shifts the focus away from the typical cat-and-mouse hunt between police detectives and criminals, a storyline that often dominates the crime genre. Rather, by eliminating police officers from the narrative, the film focuses solely on the drug traffickers, allowing the audience to see how the biggest threat often exists inside the drug ring rather than outside, in the form of greed, paranoia, pride, and vengeance.

The focus on the internal dynamics within the crime family could’ve also led Pájaros de verano to bear more resemblance to classic mafia movies, such as The Godfather, rather than any contemporary crime thrillers. However, Pájaros de verano veers away from the typical mafia movie structure in a significant way – the film does not glorify violence.

Violence rages throughout the film, yet it is not merely a way of adding excitement or thrill. There is often little build-up to a murder or violent act and there is no drawn-out suspense before the kill, no series of close calls, and no extended gunfights between heroes and villains. Rather, the violence and death in Pájaros de verano often occur suddenly with little warning. In fact, the first time a character dies on screen is quite jarring in its immediacy, as many crime movies condition audiences to expect death after suspense or action has already built up.

Additionally, the majority of the film’s violence happens off screen. The characters on screen (and the audience) are left to witness the ramifications of violence, but we rarely see the acts themselves. This also differs from many contemporary crime movies and television shows, which portray gratuitous amounts of violence on screen. By choosing to focus on the impact of violence rather than making a spectacle of the violent act itself, Guerra and Gallego de-glamorize the violence, making it feel more authentic and terrible. Over the epic scope of Pájaros de verano, the audience repeatedly sees the way that one instance of violence can have massive ramifications.

The destructive nature of violence, and particularly vengeance, is a recurring theme throughout the film. Each aggressive or violent act causes ripples that expand outwards until everything spirals out of control. Every character in the film is deeply affected by violence, as Rapayet and his family are pulled into a seemingly endless cycle of revenge.

Though the story begins with Rapayet’s innocent goal of seeking a dowry, it quickly becomes a tale of wealth, power, and greed. This greed draws Rapayet deeper into the world of the “gringos” (Americans) and away from his culture. This is where the film’s focus on the Wayuu people becomes significant, as family and culture are at the heart of the Wayuu in this film.

This emphasis on family may again seem relatable to mafia movies where everybody seems connected in some way or another. Yet for the Wayuu and particularly the older generation like Úrsula, it goes deeper than just relations, tapping into the core of their cultural identity. As the film unfolds, the priorities of Rapayet and those around him begin to change, putting him at odds with many traditions and cultural beliefs that were central to him and his family at the start of the film.

Spiritual Themes and the Song

Pájaros de verano also stands out from other crime films in the way it incorporates the culture of the Wayuu, which can be seen in its use of spiritual imagery and the concept of the Song.

For Rapayet’s family, the spiritual world is very real and closely linked to the physical one. People see visions, have dreams with powerful meanings, are haunted by spectres, and see omens in nature (particularly in birds, tying in to the title of the film). Guerra and Gallego add to this pervasive sense of spirituality through their use of symbolism and metaphor. One character has repeated visions of a bird, a sort of desert crane, which acts as a representation of the fear and guilt that the character feels. We also see dreams rife with metaphor. For example, we see people with sheets blowing over their faces, representing how they are blinded by revenge or greed. This also relates to a funeral scene where mourners totally covered their faces in grieving. These metaphorical elements and visual symbols are very real to the audience, definitively moving the story to be seen through the eyes of the Wayuu.

Additionally, the film is divided up into five different sections or “songs.” Each song involves a quasi-narrator who sings a short song that introduces the central theme of the next chapter of the film. This is a brilliant narrative device, as many indigenous cultures share and preserve stories through songs. By referencing traditional elements of storytelling, the singing narrator and the five songs ground Pájaros de verano in a narrative format that feels culturally distinct. It stops feeling like a crime movie and feels more like a tale that is part of a richer culture, acting as a warning and a song of grief.

Overall, Pájaros de verano is a well-directed film that provides audiences with a refreshing take on a popular topic. Though the drug trade has been a part of many crime movies, it has never been told quite like this. Guerra and Gallego move away from typical tropes like police officers and violent thrills to show how crime affects culture and family.

By involving the Wayuu people in the filmmaking process (30% of the film’s crew came from the Wayuu community), the directors ensured that they weren’t exoticizing the Wayuu, but instead were crafting a film that portrayed the deep complexities of an indigenous culture. The culture of the Wayuu is the lens through which the audience views the drug trade, making it all the more heartbreaking when that lens begins to crack. 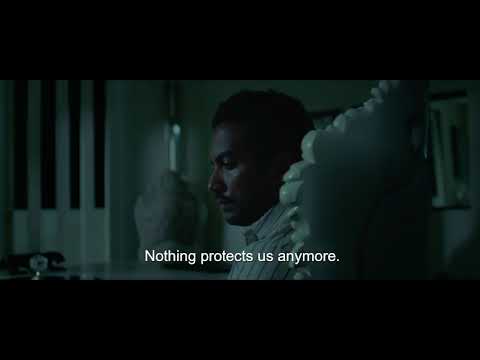 Kieran Davey is a Canadian freelance film writer and a lover of cinema. Currently based in Panama, he has an admiration for beautiful cinematography and a special love for top 10 lists (film or otherwise). Besides writing for Cinema Escapist, he has also contributed to publications such as Spill Magazine, The Playlist, and The Movie Buff.
Topics Colombia, Latin America, Reviews
Tags Carmiña Martínez, Ciro Guerra, Crime, Cristina Gallego, drugs, indigenous peoples, José Acosta, narcos, Natalia Reyes