After a well-received run in Asia, the show will start streaming Dec 1 on HBO's US services. 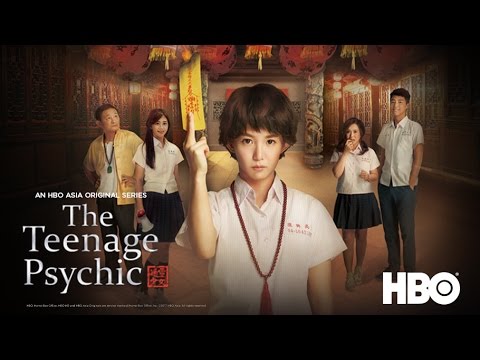 When I was little, I only got to watch HBO in Taiwan. In the US, HBO is a premium cable channel… something immigrant parents don’t tend to pay for. However, in Taiwan, HBO is included as part of regular cable TV packages (which are quite inexpensive compared to the US). Because of this, every trip back to Taiwan represented a chance for me to see the latest in premium American programming.

Thus, it’s rather poetic that HBO gave me the opportunity to preview The Teenage Psychic (通靈少女), their first-ever show filmed entirely in Taiwan. Set to release on HBO’s American streaming services on December 1, 2017, the show is not just shot in Taiwan — it reeks of Taiwanese-ness.

Teenage Psychic rests on a premise that most American viewers may find unfamiliar. Its protagonist is Xie Yazhen (played by Kuo Shuyao), a 16 year-old who moonlights as a spirit medium in a Taipei temple. In other words, Yazhen is your average Taiwanese high school student… who just happens to be able to talk with ghosts. Inspired by director Chen Hoyu’s 2013 short film “The Busy Young Psychic”, the show seizes upon this premise to offer a pleasing balance between the traditional and modern aspects of Taiwanese life.

I have to admit: despite the fact that my parents took me to all too many Taiwanese temples when I was a kid, I have a very limited understanding of Taoist spirit communication. I also have a pretty cynical attitude towards temple rituals in general, perhaps because the deities of Taoist lore didn’t bless me with admission to my college of choice. Half-jokes aside, this initially made me a bit wary about Teenage Psychic.

Fortunately, you don’t need to know that much about spirit mediums to enjoy the show. Yazhen’s special abilities are simply a plot device. Sure, she might technically be a “psychic”, but in practice she’s a counselor. Her techniques may draw from tradition, but she deploys them to assuage very modern, universally human fears. In the first episode of Teenage Psychic, Yazhen consoles a famous pop singer. In the second, she helps a boy from a broken household. You could say Teenage Psychic is a bit like the Netflix’s popular Japanese show Midnight Diner, in which a chef plays counselor for his diners.

However, Yazhen’s experiences as a spirit medium are only half of the story. She is, after all, still a high school student. Here, Teenage Psychic deploys a handful of tropes from the Taiwanese coming-of-age teen drama playbook. Frumpy wallflower female protagonist? Check. Annoying but caring best friend? Check. Handsome male heartthrob? Check. Reluctantly acknowledged love triangle? Check. Frankly, these tropes persist because they work — not only in Taiwan, but also in most of Asia (if not beyond). I bet that HBO did some analysis of that, so its no surprise that Teenage Psychic did exceedingly well when released on HBO’s Asian networks (Taiwan, Singapore, Philippines, etc.) earlier this year.

For me personally, what’s most worthwhile about Teenage Psychic is the extent to which it embodies a local Taiwanese flavor. I’ve seen quite a few foreign-backed productions that were filmed in Taiwan, but completely devoid of any Taiwanese essence (Silence, and Life of Pi come to mind). Teenage Psychic is the complete opposite. At every moment, you’re completely aware that this is a Taiwanese show. Whether it’s the prevalence of baseball, the Mazu deity statues, or the military officers enforcing discipline at Yazhen’s high school — there are many details that you wouldn’t find in places like China or Singapore.

What’s even more remarkable is Teenage Psychic‘s choice of language. While many media outlets trumpeted how Teenage Psychic was HBO’s first Mandarin production, what’s severely undersold is how much of the show is actually in the Taiwanese (Hokkien) dialect. When Yazhen is in the temple, she and her temple-mates speak Taiwanese to each other. When she’s at school, she speaks Mandarin with her friends. This not only is an accurate reflection of Taiwan’s complex socio-linguistic identity, but also is unprecedented (as far as I know) for a foreign-backed production in Taiwan.

Granted, the show’s entire cast and crew were Taiwanese, and Taiwan’s Public Television Service collaborated with HBO in its production — so that probably made things easier. At the same time, HBO could’ve severely constrained the show in the name of greater profits. After all, there seems to be an unspoken feeling that if any Taiwanese production wants to “make it big”, it must cater to the larger and more lucrative mainland Chinese market. Oftentimes, this means diluting any trace of local flavor (e.x. Mandarin-only), with the assumption that either “it won’t travel well” or “it will get banned in China”.

I hope that Teenage Psychic can help overturn this mistaken mindset. If anything, the show demonstrates how a story can be both universally appealing yet quintessentially Taiwanese; it’s not one or the other. Moreover, Teenage Psychic also proves that Taiwanese shows need not consider mainland China their only foreign distribution market. Frankly, I’m quite impressed that HBO decided to take a chance on this show and, intentionally or not, give the creators enough breathing room to tell a compelling story. Such collaborations between local talent and global (as opposed to exclusively Chinese) capital represent a promising new model that Taiwanese artists should embrace, and other networks beyond HBO should be keen to emulate.

Starting December 1, 2017, Teenage Psychic will be available on the US streaming services HBO GO and HBO NOW, as well via as HBO On Demand.