Cinema Escapist writer Emily Hsiang sat down with Director Mu-Ming Tsai and Producer Iris Lai for an interview about "Paradoxical" -- a movie about sense and emotion, as well as the passage of time. 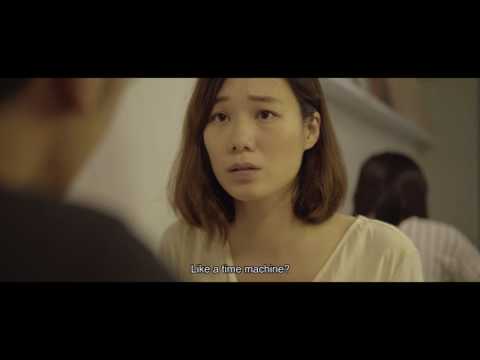 Contracted to find out the truth behind a famous stock market crash incident that took place a decade ago, Yo-Kuang and his research partner Yuan-Huei explores the limits of a recent time-lapse technology: a machine that allows its users to go back 3 hours in time.

What is most unconventional about this film is that it provides an empathetic discourse of how time revolves around our ever repeating daily lives. The characters live unique lives of their own, yet they still see themselves trapped in normal, ordinary lives. Through the eyes of Yo-Kuang and Shi-Jing, we get a glimpse of the maker community, plant design community, and general atmosphere of Taiwanese hipster culture.

Cinema Escapist writer Emily Hsiang sat down with Director Mu-Ming Tsai and Producer Iris Lai for an interview about Paradoxical.

In a short sentence, can you tell us what Paradoxical is about?

This movie is made on a low budget and with limited crew. Can you talk to us about the reason and story behind this?

Mu-Ming: For me, it’s hard to pinpoint whether it’s one source of inspiration or more. When we were at Bali for the Balinale film festival, someone told us that the style kind of felt Japanese, like Shunji Iwai. Part of it is because Japanese films use a lot of natural light and part of it is because I’m very influenced by American independent film, especially low budget independent film. A lot of these films have limited budgets and equipment, so they designed their film around it.

For me that’s a special quality. The kind of quality that makes it feel real and raw. Another reason why I chose this kind of thematic style — lots of natural light — was because the subject of the film — time traveling — is already pretty far fetched. This reflects my point of view on technology. I want this film to be grounded in reality so you get the feeling of “this thing[the time travel machine] actually exists and it’s normal.” That maybe somebody next door would want to do this.

In the film, this time travel machine is conceptually a normal occurrence in technology advancement. It’s not supposed to be a fantasy object, rather it’s an object that’s part of life. We’re so technologically advanced these days. We have cellphones — a whole computer that fits in your pocket, and we’re so chill about it. It’s because technology happens gradually.

Some day we’ll have self driving cars and robots in our lives and we’re not going to be like, “oh my god it just happened overnight!” It’s just going to be gradual. If there’s a style for me, it’d be rawness both cinematically and thematically.

One of the biggest themes from Paradoxical is “turning thirty”. I know that it was inspired by your personal story, so what compelled you to make a story about it — and now that the movie has been out for a year, do you have different insights?

Mu-Ming: It’s a mixed feeling I have with making this film. Because all my life I wanted to make a film like this, so in a way my creative process was cyclical all the way leading up to the completion of Paradoxical. These days I feel like I can finally move on to the next phase of my life. But in terms of turning 30, I think I’m still dealing with that. I’m not sure if this feeling will ever stop, I still feel the pressure of time moving and pushing me forward, but in a way I’ve been able to set some of that feeling down.

Iris: For us, the film reflects a lot of our lives — lot of the topics in Paradoxical, such as freewill, growing older, and our careers . Especially careers since ours as independent filmmakers are hard to define. It’s not exactly a normal, 9-to-5, easily definable job. And we put these observations into our movie. Therefore even when we’re done with making the film, we’re still processing our thoughts on it. Because the topics are so personal, the creative process was overwhelming at the time. But because we really finished this movie, we could face that past now.

Mu-Ming: It’s like this quote “if you can’t write something that will change other people at least write something that will change yourself.” When I finished writing the script for this movie, at least a part of me felt that I’ve done what I needed to do. Like whenever I film things, in one way or another they become reality in my own life. Especially for this film, the characters in it are based on our experience from daily life.

So the question is: “Am I really like this, therefore I wrote a script like this. Or [is it] that making this film influenced my real life?” I think that’s a weird, paradoxical thing. That’s one of the things we talk about in the film too.

Can you elaborate on the idea of “pressing time”?

Mu-Ming: For me it’s kind of weird because when I was in my 20s I didn’t feel the pressure of time, and I had the logical understanding that one day I will grow older. But it’s not until 30 [that I felt it], any maybe it’s kind of a physical thing. For example women gets threatened all the time by society on fertility issues. Along with that traditional pressure, that says you kind of have to have done everything in your life by the time you turn 35.

Do you think, as a man, you have this kind of pressure?

Mu-Ming: As a man, that’s a good question. For sure the characters in the movie that struggle are women, but as a man… to be honest I felt it being less so as a man.

A big part of it comes from people around me. I feel that I have a responsibility, as a man when I turn 40 or 50, I could still have children and maybe do a lot of things, but somebody that I love has physical urgency like this. And I’m talking about it as a family unit. I’m not telling people to do things, but as a family unit with someone I love, it’s something we have to consider.

Iris: We used women as characters to express this urgency because women generally have an easier time in expressing emotion. Men in general, at least in the traditional sense, have a harder time expressing emotional feelings. In a way, female characters are like a medium for these topics.

Mu-Ming: This is a good question on whether men and women feel more sensitive about time. I didn’t have this insight till you asked me: maybe subconsciously, well, people say that we all have a feminine and masculine side in us. For me, this problem with time is perhaps the more feminine side of me speaking. Time is more of an empathetic topic for me. We chose to express that concern with a female character in Paradoxical, but perhaps subconsciously. I remember getting a comment from our audience: that we could come back and watch this film when we’re older.

Mu-Ming: Before I was making this movie, I had a strong notion that all my life was building up to this film, and then the way I achieved it was like as if I had to constantly attack the story. Especially when Iris and I were working on the script: we’re writing the same story every day and our daily life was like a routine — and this sort of expanded.

People just don’t change. People dress the same, their personalities are the same as a kid and as an adult, and it kind of begs the question of if we really have free will or if it’s all predestined. Even if you try very hard, in somewhere or the other, you end up being back in a loop. Thematically it gives the movie a nice story to talk about. But also, who’s to say that being in a loop is a bad thing? Routine allows us to do things other than surviving.

From the way I perceive it, Paradoxical is also a lot about the contrast between logic and empathy. For example, Shi-Jing is obviously very empathetic, where her decisions are more based on guts. Meanwhile Yuan-Huei is logic driven and tends to not stray away from reason. Can we talk more about this?

Mu-Ming: I spend a lot of my life trying to figure out if I’m a more sensible or emotional person. I still don’t have an answer. But personally, I think that a person can be both logical and empathetic. Why do you try so hard to be one thing when sometimes you can be both that coexist peacefully? It’s not easy to handle both sides but I can find fun in both.

What’s the biggest struggle you faced making this film and do you have a happy story to share?

Mu-Ming: Creating the story is a big struggle [laughs]. We had to write about this big story, so rather than using traditional script formats, we ended up having a big outline of essential lines. This allows our actors to have space for improv and allow us to be very flexible both during and post-production. We’re also low-budget, so a lot of times we had to work around limited equipment and space. Even under these limitations, we managed to not have too much overtime, or overwork our crew and actors.

I do think I have an egoistic side. And that egoistic side helps when it comes to managing actors. That’s why we can both bring things on the table. It’s really about helping them bring out their bests without being too intrusive to what they know. How do you control your vision but at the same time you don’t push too much. You kind of have to let go of a little control when it comes to your vision. As controlling as I am, some of the best moments in the movie came from unplanned events. That’s why we can both bring things to the table.

Distribution is also something we’re still working on. How do you market a film that is its own genre — Paradoxical is an independent film in Taiwan and Taiwan has yet to have an indie film industry, so we’re trying to find an angle to put this film into the market. It’s also hard because it’s our first time filming. Even till today I’m still, in a way, recovering from this process [laughs].

Iris: I had a good time interacting with the actors. We’ve only done documentaries before so through interacting with actors we learned a lot about what their lives are like. Even talking to them it feels different from other crew members. With actors it feels more like managing friendships, unlike interviews where you could just finish and leave. To help the actors prepare the role, we invited them to visit designer companies, classes related to their role in the film. We still keep in touch with the actors.

Paradoxical is now available for online streaming via their official website.

Conflict of interest disclosure on Sep 1 2019: the author of this article worked as a production coordinator, editor, and camera assistant for Paradoxical. Cinema Escapist endeavors to prevent future instances of such conflicts of interest.