Review: “Pebbles” Is a Modest and Intimate Walk Through Tamil Nadu

Pebbles is an understated and modest film, minimalist in plot—and it is a short one, clocking in at one hour and fifteen minutes. But it is a beautifully shot film and, moreover, a highly effective first outing for director PS Vinothraj.

The plot of Pebbles is hardly original, detailing an alcoholic father returning to claim his son from his wife’s family while threatening retribution against his wife. In this, he comes into conflict with his wife’s family, and compels his son to follow him despite resistance. When his son tears to pieces the bills that he intends to use to pay for a bus ticket, he is forced to walk thirteen kilometers home, with his son in tow for much of the journey.

Though largely a linear narrative focused on the core cast of the man and his son, the film is told as a series of overlapping vignettes and set pieces. These set pieces provide snapshots into life in the south of the Indian state of Tamil Nadu. What is evoked is not only the harshness of life at times, but also social mores of the region, conveyed through scenes of a girl roasting rats with her grandmother that the father and son pass by, and dialogue between a newly married couple that passes by on a motorcycle.

The man and his son serve as the viewer’s entry point into these various set pieces, providing the overarching framing for the narrative. It is clear that the story of the man and his son only serves as an entry point into the larger context. The film’s conclusion, for example, does not resolve the story of the man and his son, instead shifting to a scene of a group of women waiting to scoop water out of a drying well—gesturing toward larger social conditions that the film seeks to center.
Indeed, above all these set pieces looms the setting itself, with the tense beauty of the region evoked through the wide aspect ratio of the film, showing off the dusty roads, blistering blue sky, and white sun. Perhaps, in this sense, it is Tamil Nadu that is the true main character of the film.

Reflective of the violence of this setting, then, is the depiction of human sociality among the people that inhabit Tamil Nadu. Sociality is depicted as charged with violence, such as the scene of fighting onboard a bus that opens the film, or fighting between the man and his wife’s family.

The film’s camera work is a treat, highlighting the repetitive nature of walking, or even the comical way that the repetitive motions of walking appear in the dry sun. A scene in which the man beats his son, the camera angling around the scene of the beating rather than directly showing it, is particularly effective and lingers in the memory long afterward—the beating gestures toward an implicit violence better than representing it mimetically. The use of music is sporadic but appropriate when needed.

Though there are no standout performances, the acting is effective. Karuththadaiyaan, who plays the father, has to carry the majority of the film, as the primary driver of any dramatic action or progression of the plot. Overall, the protagonist strikes as a character at war with all other characters, his surroundings, and perhaps even himself. Karuththadaiyaan evokes this character ably, though he is not given a chance to demonstrate further dramatic depth. So, too, with other characters and how they are acted—the film prefers to draw on established character types, in terms of family roles, rather than vest any character with deep individuality. But this is not a flaw of the film, per se; in fact, it can be primarily seen as a stylistic choice.

Pebbles ultimately is a film that prefers to let readers fill in the blanks—not exactly a film that speaks through silences, yet one which through the minimalism of its plot gestures toward larger universals. This is where the effectiveness of the film, as well as its maturity, lie. The film never is didactic, nor does it ever have to be heavy-handed. Instead, the film tells its story and shows what it needs effortlessly, without needing to linger or be showy. 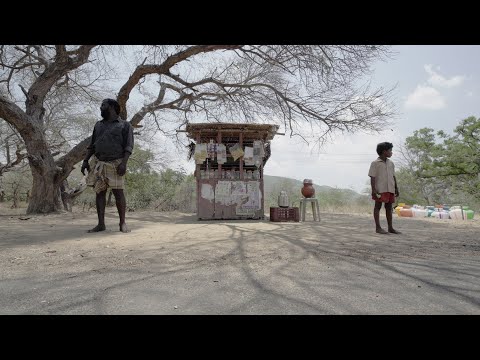