The Great Indian Kitchen highlights the subtle suppression of women as a practice carried out in their own homes and even perpetuated by other women.

The flashes of delectable cuisine at the start of Malayalam filmmaker Jeo Baby’s The Great Indian Kitchen, are reminiscent of other movies where food forms a central theme to the plot. Unlike those films, this movie’s attention quickly shifts away from the entrees and the side dishes, and onto the ladies in this traditional Indian household dealing with a stacked sink and rotten leftovers every single day. With a backdrop that millions relate to, The Great Indian Kitchen highlights the suppression of women as a practice systematically carried out and handed from one generation to another, bringing to light an undeniable truth about the ingrained bias against them prevalent in traditional Indian households.

The wife in The Great Indian Kitchen has a seemingly simple goal: all she yearns for is an equitable relationship, one that lets her share a meal with her partner within the confines of her home. We aren’t told her name, for this is the story of the quintessential Indian housewife.

The movie is set in a picturesque town in the southern Indian state of Kerala and starts at the wedding of a couple (Nimisha Sajayan and Suraj Venjaramoodu). In what she thinks is a bonding exercise with her newly adopted family, the wife lends a helping hand to her mother-in-law with her chores in the kitchen. unaware that the husbands demonstrate a callous and condescending attitude towards their wives. Relegating their spouses to thankless servants, they tacitly have the women do things like carry their footwear when they head out. It is one of many duties that the submissive women perform without questioning — a subtle form of slavery to the untrained eye. The movie depicts this unique form of domestic abuse, one that involves no explicit cruelty. They don’t raise their voice, nor lift an arm, but inflict an equally deep wound. When the workhorse at the center of this family, the mother-in-law, has to leave town for a family commitment, the mantle of head servant now falls on the wife. That’s when the cracks begin to appear — literally and figuratively.

It isn’t only the subject matter of The Great Indian Kitchen that makes it powerful. Director Baby uniquely immerses the audience in the wife’s pain through the imagery of the film. Take for instance the scene in which the wife stands at the doorstep of the kitchen, and stares at it a tad longer than usual. In an earlier life, she was a dancer. Now she’s a housewife forced into a different kind of dance where she juggles pots and pans, while dealing with a broken drain pipe. The pipe becomes emblematic of the fissure in her relationship with her husband, unraveling like their relationship, and ignored by him until the end. Sajayan enacts the wife’s pain beautifully; it’s wordlessly clear that she wants to run away from this mess, or even just get a day off.  With such nuanced performances and little background music, the movie soaks us in the atmosphere, and sets up a telepathic connection between the viewers and its characters.

After praying for a day off, the wife finally gets it, just not in the way she wanted.  In fact she gets an entire week off from the kitchen when she gets her menstrual period. Sadly for her, it opens up a wholly different level of torture, as she is banished to being an untouchable. Ironically, it isn’t a man that treats her the worst during this time. Her aunt-in-law is unflinching in her restrictions on the wife, even subjecting her to solitary confinement. Interestingly, her restrictive behavior doesn’t stem from hatred; she just remains steadfast in enforcing the same boundaries for the wife that she had to adhere to. Her actions highlight how women are taught by patriarchal tradition to oppress, rather than protect, each other. The scene in which the aunt-in-law bids adieu to the wife on the seventh day is especially gut-wrenching. She leaves with a smile, as though nothing has happened. Jeo Baby highlights this social evil in our cultures, arguing it borders on a human rights violation. Meanwhile, the background score harmonizes with news commentary and viral social media posts that highlight how a woman’s biological cycle is used to body-shame her and deny her entry to temples, such as the Ayappa temple in Sabarmiala . On the other hand, men are considered messengers of God during the 40-day, “Ayyappa Mandala vratham” period, which culminates with a visit to the very same temple. The Great Indian Kitchen encourages us to examine the shocking dichotomies that Indians witness every year and remain detached to.

Jeo Baby deftly maneuvers the film to keep it focused on its leading lady, and her husband’s dismissiveness of her simplest desires: a life beyond the kitchen, and some gentleness in bed when the lights go out.. Her story about abuse behind closed doors speaks to a universal problem, one exacerbated by the pandemic we are living in the midst of. Oppression of women isn’t a problem isolated to the Indian subcontinent, as seen by its prevalence in global films. For instance, Kim Ji-young, Born 1982, talks about the undercurrent of sexism in Korean society, and the classy Georgian movie My Happy Family, highlights how a woman’s role in a family and society is taken for granted.

On its surface, The Great Indian Kitchen appears to be a simple tale, but it delivers a powerful message about gender inequality, whilst opening our eyes to how we conveniently disguise it in everyday actions. We see flashes of brilliance in the film, such as a restaurant scene where the wife sits shoulder-to-shoulder with her husband on a table, a privilege she never enjoys inside their home. Centuries of social evils, regressive behavior, and gender bias don’t vanish with the passage of time; they are rigidly reinforced by succeeding generations. The movie depicts these issues effectively while also offering a bold solution: breaking the cycle and ending the generational chain of intolerance, by starting a new one that taps into a woman’s freedom and self-worth. We see a powerful step in that direction when the wife turns her back on the husband, severing their relationship to chase her passion. She starts a new chain by teaching her liberating art form to a group of young girls. The film teaches us that we don’t change the world by trying to reform the incorrigible, rather we do so by empowering the vulnerable, so there’s none left to prey upon. 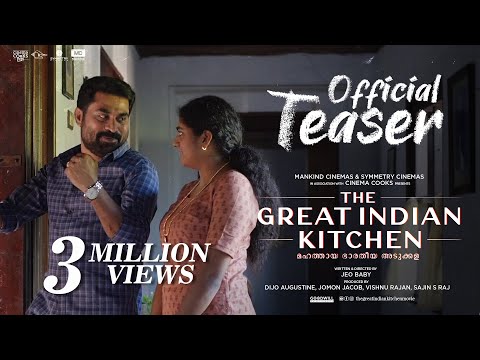 Anuj Chakrapani is a cinema enthusiast, who believes that film, like other art forms, is open to interpretation. He adopts a deconstructionist approach when writing about movies. He lives in Silicon Valley.