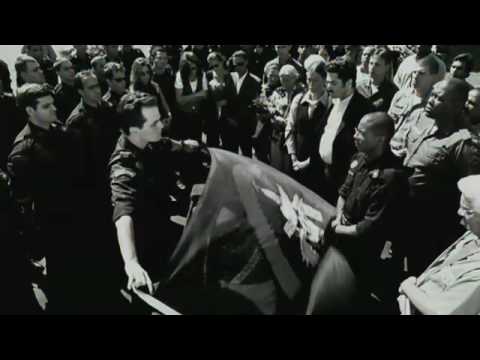 Before playing infamous Colombian drug lord Pablo Escobar on Netflix’s Narcos, Brazilian actor Wagner Moura made a name for himself by starring in an opposite role. In 2007’s Elite Squad, Moura plays Captain Roberto Nascimento, a police commando in Rio de Janeiro whose job is to exact brutal justice upon drug lords and their lackeys. Based on a book by two former real-life Rio cops, Elite Squad centers around the BOPE (Batalhão de Operações Policiais Especiais, or “Special Police Operations Battalion”) special police unit and remains one of Brazil’s most popular and action-packed films.

The story kicks off with Captain Nascimento telling us how, on the verge of having a son, he needs to find his own replacement In a city full of horribly corrupt cops, this is no easy task. BOPE’s members must not only pass grueling training and possess impeccable physical stamina, but also remain untainted by Rio’s omnipresent sleaze. Enter Neto Gouveia and André Matias. Best friends and greenhorn officers with an uncommon sense of righteousness, the two emerge on Nascimento’s radar.

Elite Squad contains as much action as you’d expect from any popular cop movie. What’s distinct about the film, however, is just how savage its violence is. BOPE, in upholding justice, commits acts that would make any human rights lawyer or social justice activist burst into rage. Besides a liberal shoot-to-kill philosophy, Elite Squad‘s rendition of BOPE routinely deploys torture and intimidation in order to achieve its means. Though Nascimento and his fellow commandos are technically the film’s protagonists, they are anything but knights in shining armor. It’d be hard to argue that the movie, despite being so popular, glorifies the police. Instead, it seems to show how, rather ironically, the only way for cops to counter the corruption of Rio’s drug lords is to become more brutal than them.

It’s important to note that, while heavily dramatized, Elite Squad does have a fair bit of real life precedent. BOPE is a real unit, after all, and it does get flak from human rights groups over its actions. Social inequality, manifested through sprawling drug and crime-infested favelas, is still very much a problem to the extent that even former Brazilian President “Lula” da Silva described it as “apartheid”. The film becomes more effective by acknowledging, and feeding off of, these realities.

For instance, the fact that Matias, an Afro-Brazilian, is simultaneously a law student brings an extra dimension to the story. Not only does it create plot tension, but it also allows for some valuable commentary on race, class, and the true meaning of “justice”. Surrounded by mostly white bourgeoisie classmates who decry the police as corrupt, abusive, and ineffective, Matias must navigate a philosophically complex path onscreen. You’d be hard-pressed to find another police movie that, like Elite Squad, quotes from Foucalt’s Discipline and Punish.

As a rare mass-market action movie that provides good entertainment without sacrificing either drama or intellect, Elite Squad is one of the best police films I’ve seen. Yes, its general subject and moral struggles appear in other cop movies too. However, the care it’s still able to inject, combined with its highly relevant and stirring Brazilian context, give it a laudable degree of distinctiveness.

Support the moviemakers and help us pay our bills! Stream the movie on Amazon

or buy a physical copy

using our affiliate links. Thank you for your support!

This movie is also available for streaming on Netflix.