Review: “Have A Nice Day” is Chinese Animation With Western Characteristics 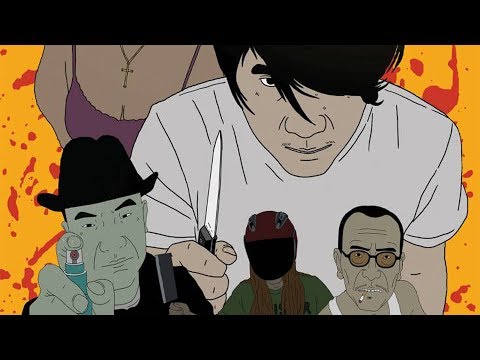 After gaining a Golden Bear prize nomination at 2017’s Berlin International Film Festival, Have A Nice Day jumped onto film critics’ radars — not the least because the last Asian animation to achieve such a feat was Studio Ghibli’s Spirited Away. However, Have A Nice Day is not a heartwarming tale for families. It’s a dark adult animation: the first ever for China, in fact.

Director Liu Jian animated most of the film himself over the course of three years. Reminiscent of Israel’s Waltz With Bashir or South Korea’s The Fake, Have A Nice Day offers a grungy, bleak depiction of rather serious subjects.

Set in Nanjing, the movie kicks off when a driver named Xiao Zhang steals 1 million RMB from a gangster boss. Xiao Zhang wants to help his girlfriend correct a botched plastic surgery, but he soon encounters others in pursuit of the money.

A small hubbub arose after Have A Nice Day was denied entrance to the 2017 Annecy International Animated Film Festival, supposedly due to Chinese government influence. Honestly, after watching the movie, it’s rather puzzling to me why this happened. The film is bleak and violent, but no more so than something like Jia Zhangke’s A Touch of Sin — which screened at many festivals without trouble. Perhaps intervening in foreign film festivals is part of Xi Jinping’s “new type of international relations” that aims to create a “big family of harmonious coexistence”.

However, it’s easy to overlook that Have A Nice Day actually garnered a theatrical release in China. Of course, Liu had to make “slight modifications”  — but the fact his film wasn’t banned outright indicates that concerns of heavy-handed censorship are probably overblown.

For the most part, I see Chinese authorities as methodical, rational actors. In that vein, Have A Nice Day doesn’t seem worth the effort to heavily suppress. It’s not only an art house film, but also one that uses a medium (animation) that will feel rather jarring to Chinese viewers, given the subject matter. In fact, Have A Nice Day flopped at the Chinese box office, with local audiences reporting that they didn’t really understand the point of the movie.

Journey to the West(ern audiences)

I suspect that Liu never prioritized Chinese audiences though. There’s an intriguing dichotomy to Chinese films: the ones that do well abroad usually don’t do so well at home. It’s a bit like famed dissident Ai Weiwei — thanks in part to government censorship, almost nobody in China knows who he is.

Liu seems to have made Have A Nice Day with this in mind. For one, an unnaturally large number of signs and documents shown onscreen have English labeling beneath the Chinese. There’s also a moment in which, out of the blue, one character listens to Donald Trump’s November 2016 election victory speech (in English, of course). The film is a Chinese animation, but with Western characteristics.

Aspects of Have A Nice Day’s narrative may feel hackneyed for Chinese audiences, but novel for Western ones. Take Xiao Zhang’s motivation to pay for his girlfriend’s plastic surgery — that’s honestly a commonplace reality for Chinese that the film doesn’t do much to innovate upon, but something that may pique a Western viewer’s interest without additional varnish. Furthermore, much of the film’s progress depends on Xiao Zhang leaving a chat window open in an internet cafe. After seeing that, I thought to myself: “Xiao Zhang could’ve avoided a lot of trouble if he just used WeChat on his phone, like everyone else in China.”

Have a nice opinion

If you are Chinese, or have some existing knowledge about Chinese society, I can see why you might have trouble getting into Have A Nice Day. The animations are top-notch and social critique (literally “chasing after money”) compelling, but it just doesn’t seem made for Chinese audiences.

On the other hand, if you’re a regular Western film buff, Have A Nice Day is fully deserving of all its festival praise. It’s a familiar and entertaining introduction to some of China’s bleaker realities, one that I hope other Chinese filmmakers seize upon as an example for further iteration and localization.