Wong Kar-wai’s renowned film Chungking Express came out in 1994, when Hong Kong was drowning in uncertainty regarding its 1997 return to China. As such, the film possesses an allegorical nature, as a cinematic reflection of the anxieties surrounding Hong Kong’s impending handover.

One way this allegory comes to life is through Wong’s assignment of repetitive pop songs to particular characters and scenes. I’ll focus on two examples: Dennis Brown’s “Things in Life” and The Mamas & the Papas’ “California Dreamin’.” By looking at these two songs, we can see how Chungking Express not only highlights Hong Kong’s desperate unease towards its post-1997 future, but also hints at an eventual optimism that emerges despite the city’s struggle with ephemerality. 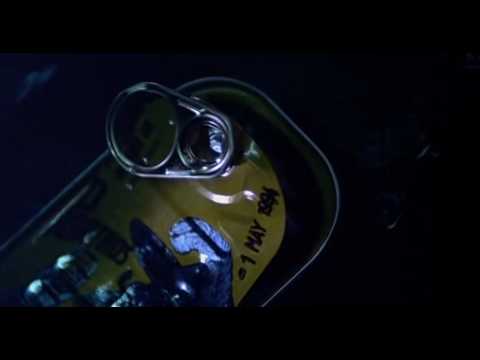 Dennis Brown’s “Things in Life” appears four times in Chungking Express‘ first 40 minutes. During the last of these four instances, the camera follows a white drug boss as he leaves a bar. While he exits, the song rises in volume, indicating that, this time, its occurrence is not from his perspective. The volume continues to increase, and “Things in Life” starts straddling the boundary between diegetic and non-diegetic sound.

Then, when the drug boss squats down to play with kittens, our female protagonist (played by Brigitte Lin) fires several shots at his back. The song fades away. For a moment, the scene descends into chaos, before settling onto a can’s expiration date: May 1, 1994.

Here, the crescendo and fade of “Things in Life” comments on the inevitable expiration of all things. The physical date printed on the can renders time as tangible, reflecting Hong Kong’s desire and desperation to contain the future, to control its uncontrollability. Every time the song repeats in the film is another assertion of Hong Kong’s frustration and fear over this future. After all, in 1994 many Hong Kongers saw an expiration date for their homeland: 1997.

Furthermore, the lyrics of “Things in Life” reinforce the impermanence of life, stating that “it’s not every day we’re going to be the same way.” It’s a theme that then gets echoed through other dimensions of Chungking Express, like how Brigitte Lin’s female protagonist always wears sunglasses and raincoats together because weather, like life, is unpredictable. 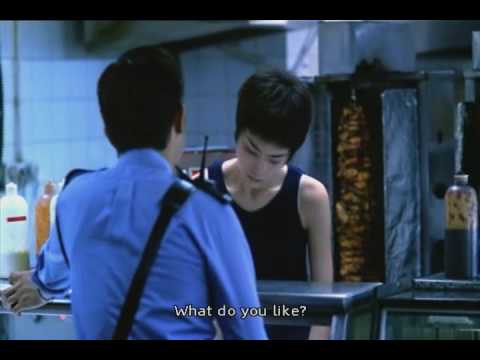 During the second half of Chungking Express, The Mamas & the Papas’ “California Dreamin’” occurs eight times. In one notable instance, when Cop 663 (played by Tony Leung) arrives at his regular snack stand to order a chef salad, Faye (played by singer Faye Wong) turns the volume up.

The song experts a hypnotic, controlling effect over Faye. She bobs her head left and right, eyes dazed, comfortably numb from life, passively moving about. The blaring music inhibits communication, and both Cop 663 and Faye have to shout over “California Dreamin’” to hear each other. The music becomes Faye’s shield, both from her own mind as well as from the hectic world around her.

Unlike other characters in the film who obsess and lament over the transient nature of life, Faye embraces it with a carefree attitude as she allows the music to dictate her future (literally, if you know what happens in the movie). This allows Faye to liberate herself from an otherwise claustrophobic and monotonous space—perhaps reflecting a way out for Hong Kong.

Interestingly, “California Dreamin’” is also not a stereotypical song about a California filled with beaches, bikinis, or convertibles driving down wide freeways. Instead, the song’s writer is actually in cold and dreary New York. He’s longing for California, dreaming of a brighter and more secure place.

The song suggests melancholic hopelessness, opening with “all the leaves are brown (all the leaves are brown), and the sky is grey.” Additionally, the song is in a minor key, contributing to a sense of harmonic uncertainty and pervading sadness. However, Faye’s sanguine affinity towards the song reflects a subtle optimism despite bleak prospects.

Music in Chungking Express offers one of the strongest reflections of the film’s central allegory on Hong Kong’s pre-handover uncertainty. This uncertainty extends across multiple spheres—political, social, existential.

As the Hong Kong of 1994 grapples with an impending change in government, Chungking Express offers a mirroring of that challenge by showing characters who deal with the impermanence of interpersonal relationships.

The film also reflects Hong Kong’s unique “ethnic consciousness.” As a city bombarded with various nationalities, ethnicities, and colonial influences, Hong Kong constantly challenges its citizens with questions of identity—what does it mean to be a Hong Konger, and how might that change after 1997?

While “Things In Life” reinforces the stark framing of an “expiration date,” “California Dreamin'” hints at another path. As Faye bobs her head to the song and smiles, she unveils an alternative for Hong Kong. Rather than worry, the city can embrace change and uncertainty, looking upon the future with optimism despite unfavorable circumstances.

More than two decades on, these musings from Chungking Express may still have relevance for a Hong Kong that continues to struggle with its sense of self and future.

Maya Ho is a Senior at Columbia University ’18, studying Financial Economics. She is from Los Angeles, California, where she danced competitively for 13 years. She is a Student Representative of the Columbia College Alumni Association, Co-chair of the Seniors for the Columbia College Fund, President of Columbia Investment Banking Division, and a founding member of the Columbia branch of OneForTheWorld, a non-profit. She is also self-dubbed ‘Food Go and part-time alien hunter.