Bavo Defurne is interested in the subtle emotions that film can capture with details of dialogue and visual depth. In this conversation, he talks about the process of depicting these emotions in his film Souvenir, starring European actress Isabelle Huppert.

Liliane feels like a piece of meat. Her singing career is long over. She holds a leafprint dress up to her collarbone, looking in the mirror. Then suddenly she is looking at a factory uniform in the mirror at work, wondering how she became what she now is. She presses leaves into a package of pâté on a conveyor belt as a garnish, intimating the likeness between the product — old, dead, replaceable — and herself, once a rising starlet competing in Eurovision, now an anonymous factory worker.

I spoke with Bavo Defurne, the Belgian writer and director of Souvenir, about the artistry of his film, which came out in the United States on Friday in limited release. I also got to hear about his past films and his thoughts on the kind of emotion international film is capable of depicting.

Thanks for taking the time to speak with me about Souvenir. I loved it. It was quiet and almost disturbing at parts. What was the kind of mood you were hoping to evoke?

I think I wanted really to evoke the mood that the main character is in. So Liliane, the role played by Isabelle Huppert, and I felt the need to show the world through her eyes. It’s very subjective. I didn’t want to make it realistic or anything, I wanted it to be really her way of seeing the world. I think that’s what constantly obsesses me in movie making, is trying to be very subjective and as close to the emotions of the main character as possible. So I think that will tweak the realism into, I hope, a more emotional truth. The world doesn’t look like my movies, but I hope the world feels like my movies.

That’s a good line. So you were going for this impressionist or expressionist edge. When you were thinking of that, did you have Huppert in mind as the casting choice, or was that something you found in the casting process?

Well, you know what, there’s two answers to that. There was one side of my brain that always dreamt of making this movie with Isabelle, and the other side of my brain very rationally said it’s totally not professional to dream of working with such a great European star and to write a whole movie for someone.

I financed the movie, wrote it till it was really really good, and we did expensive casting. There was a shortlist of some actresses and the casting agent said, like, “Okay Bavo, we have the shortlist so now you really have to say who we are going to contact first, very, very first.” And so I didn’t really dare say it would be Isabelle, so I said, “Well, if I can really be honest it should be Isabelle.” And she contacted Isabelle.

Isabelle read the script, saw all my movies, even my short films and “Campfire” and North Sea Texas. She watched them all and she was very precise, and I met her and she asked very concrete, precise questions about how I make movies, why I make movies, how I work with actors, how I work with the visuals, almost like an exam. She really wanted to know what kind of director I was. That was a long talk, and it was fun. Quite quickly she said yes, I’ll do it.

That must have felt pretty good. Did she give you her thoughts on North Sea Texas and some of the other films you’ve made?

Yes. She liked North Sea Texas because it’s about fragile emotions, it’s about love and sex. It’s not evident, but Jelle, the guy who played in North Sea Texas, he was 14 years old when we did that, and we’re still friends. It’s still okay, we’re still very happy that we did that, and that gave a lot of trust to Isabelle, that if I can make 14-year-old boys make long films with other boys and it still looks artistic and honest, then she felt she was in good hands. I don’t know, you should ask her. When you ask her in interviews, she usually says she likes the scripts very much.

Well I think the dialogue was full of fragile emotions. There are a couple of very dramatic scenes, but there are also a lot of scenes with micro-emotions that are communicated through the dialogue.

I don’t know if you’ve seen Rock’n Roll with Marion Cotillard. It’s about this couple of actors and the way they cope with aging out of their prime, but told in a very different direction from Souvenir. What led you to that storyline? It felt like there was an incredible loneliness that was communicated. Is it a reflection of the times? Or am I reading too much into this recurring theme?

I think you put it right. The movie is about loneliness, now that you say, and it’s a recurring conflict in the kind of movies I make, because Pim in North Sea Texas is also an extremely lonely kid, and if I think now, most of my short films are about loneliness.

So, I don’t know. I do know! It’s about loneliness. It’s someone who feels she has lost contact with the rest of the world, and it’s when she meets this young guy, Jean, he’ll be her–-he kind of saves her. And because he comes there to save her, she says “No, no. Don’t save me. I’m good in my little cocoon here.” So the movie is about someone who wants to save you but suddenly you’re reluctant to do that. It’s about that struggle. And it’s an interesting struggle because sometimes we don’t see who is there for us.

And I thought there was no better way to communicate that than in a pâté factory, for some reason.

Yea, I loved the pâté factory, and Isabelle loves that too, actually. One would say she did this movie for the glamor and little things, but anytime she pitched the movie before shooting it to her friends or husband or family, she’s say, “You know what, it’s about this lady who works in a pâté factory.” She loved that. She really wants to toy with her image and explore acting and what a character is.

Of course the movie always has an element of the people I see or my own adventures in this thing called “life,” but I think it’s quite an uninteresting and dull to tell that as it is. I love contrasts and I thought this pâté factory was the best contrast one could imagine for a singer. Maybe some people would choose something in the middle, like she would first be a star and then work in a perfume store or a chocolate store, something “ladylike,” but for a character like Liliane, either you’re 100% or 0%, black or white. If she’s not in the spotlight, she’s absent.

I think the contrast is literally true in the movie. The scenes in the factory are an intense, sterile white and then the glamorous singing scenes are dark and smoky and colorful and glittery.

I like that. I hope the movie is more than just a story, and I enjoy working with set decorators who go with that. I had the honor to work with a guy, André Fonsny, who has a background in working with comics. So he really liked that, to go from the gloomy blue world of the factory to the brownish, vintage, somehow-dated apartment. I liked her apartment. It very much reflects how she is – it’s beautiful, but it’s up to us to discover how beautiful it is.

The audience uses their eyes to go further. There are a lot of layers to this movie, and the whole crew put so much effort into making it a rich experience with a lot of details. For me, cinema is the art of details. And the art of choosing. There are millions and millions of choices you have to make, and it’s kind of lazy to not choose a color or a doorknob. Everything is chosen.

All the sets were drawings first, and we really could make up a world. That’s what excites me about movies – making up worlds that don’t exist, they only exist in our fantasy. That’s the adventure of movie making. There’s a lot of horrible things about movie making, but that’s not one of them.

Some of the other films you made have been in Flemish. What made you choose to make this film in French?

Eh. Isabelle. [Laughs]. Isabelle is one of the reasons, but that might have been a secret reason, as I told you. I must admit that we went into casting in France with a French casting agent. So that was one thing. I’m multi-lingual. I enjoy speaking a lot of languages, and I like to work international. My movies are not about Flanders. They are much more about emotions, and I feel emotions don’t have borders. The emotions I’m talking about are fairytale emotions, so I felt a need to make it more universal and make it more international. I like that. I’m more at home in international cinema, telling universal stories.

Me too! That’s why I love having conversations like these. Thanks so much for giving me the time. 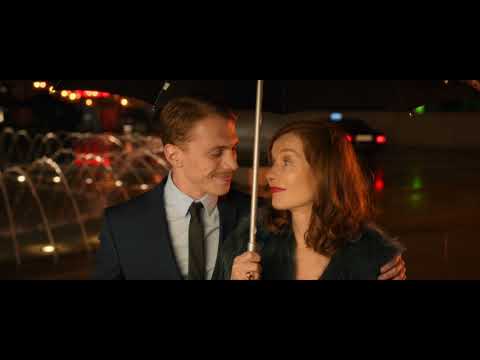 Souvenir was released December 21 in France and March 2 in the United States.

This interview was edited for clarity and style.