A man meets a woman. The two fall madly in love. Their burning passion drives that man to beat the Nazis. So goes one of Hollywood’s classic romantic tropes, popularized through movies like Casablanca, The English Patient, and Allied. At first glance, German director Christian Petzold’s eighth film Transit seems like it might recycle that trope. However, Petzold’s film goes in an entirely different direction, showing how “Hollywood love” only leads to tragedy— and doesn’t stop the Nazis at all.

Transit opens in a temporally ambiguous version of Marseilles. While its characters drive modern cars and use iPhones, they’re also trying to flee fascists reminiscent of the Nazis in World War II—sending Western Union wire transfers and begging for visas at the US Embassy to boot. Our protagonist Georg is one of those unfortunate refugees trying to escape the fascist menace. Desperate for an out, Georg steals a dead writer’s identity. However, there’s a twist: Georg meets the writer’s wife Marie, and they fall in love.

This might seem like yet another Hollywood WWII love story, where Georg ends up becoming some glorious anti-fascist crusader as Marie swoons beside him. Alas, that’s not the case. To put it simply: Georg and Marie don’t end up happily ever after. Instead of a Nazi-fighting hero, Georg becomes a sniveling wreck by Transit’s conclusion.

The main locales of Transit are places that droves of real-life migrants are being forced out of, because they are not welcome. Transit shows a Marseille that has come a long way since The New York Times reported it as having the largest Islamic population in France several years ago.

In Transit, we see the cracks in Marseille’s melting pot, particularly through the North African boy Georg befriends, Driss. Unlike Georg, Driss and his mother have no way of getting out of France legally, because neighboring countries refuse to house non-white people. For Driss, Georg represents false hope, an emblem of a life he perhaps could have had— if he were from a largely white country like Germany. Though Driss’ family is not a major part of Transit’s plot, Petzold putting them in there in the first place helps to distinguish the levels of privilege associated with contemporary migrant crises. The political situation is terrible for everyone, but Driss’ mom must devote all of her attention to plotting an illegal escape from France, while Georg can spend some time trying to get a new girlfriend.

Happily Ever After—2019 Style

Though Georg’s focus on love as an escape seems laughable, the idea of love triumphing over everything has been a storytelling trope for centuries. Transit sets us up for a triumphant Hollywood finale: perhaps Georg and Marie making it to Mexico, just as a stormtrooper kicks in the door of Georg’s former hotel room, discovering his true identity.

However, this is not the case, because ultimately Georg is delusional about his role in Marie’s story— and the world. He thinks that he is in Casablanca, that he is free to choose when he escapes the fascist terror around him because he has fallen in love. For the bulk of Transit, Petzold even fools us into thinking this is a love story. The film never explicitly states that Georg has the privilege to choose, but instead illustrates that privilege through the carelessness of his decisions, punctuated by the film’s tragic finale.

As Mr. Petzold himself once said, oppressive worlds lead to oppressive love. Transit turns the destructive heteronormative fantasy of overcoming some great existential crisis and getting the girl on its head here.

In the taxi on their way to the ship that will take them to Mexico, Marie goes on about how she expects to see her deceased husband Weidel onboard. Devastated, Georg stops the cab and jumps out. Later, when Georg goes to the port to ask if Marie ended up leaving, the attendant explains that her ship sank, with no survivors. To make matters worse—the fascists will storm Marseilles literally any second.

During that moment, we discover that most of Transit has fooled us into focusing on love when it is actually about being blinded by privilege. If Georg looked like the refugees that we see plastered all over the news today, his actions would immediately seem tragicomically irrelevant. However, his ambivalence and his whiteness reveal a greater truth. There is nothing romantic about fascism, about being upended from your home, or about false hope.

A neater ending would have proved that Transit has almost no relationship with contemporary politics. However, since Georg is stuck in Marseille, we not only wonder what will happen to him, but what has happened to Driss and his mother, and to the rest of the people who could not cheat reality and get a visa. We are left with the ambiguity and chaos of contemporary migrant crises, and of the visceral reality of fascism. Like Georg, we are left waiting. Petzold has it both ways, capturing our attention with a thriller’s conventions and a love story’s momentum, all the while building up to an extremely resonant and dissonant conclusion.

Transit is currently screening in select US theaters. 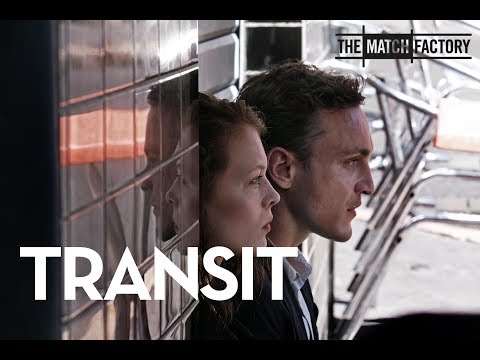