Banned by Chinese censors for a year, "Better Days" gets its big reveal with dark undertones about high school bullying.

Better Days, which was supposed to be this summer’s biggest Chinese blockbuster, is finally in theaters. Zhou Dongyu, one of China’s top contemporary actresses, reunites with Soulmate director Derek Tsang in this high school drama about bullying. Set within the context of the gaokao, China’s all-important college entrance exam, Better Days explores the darker side of daily life for modern Chinese youth.

After blocking Better Days from the 2019 Berlinale and subsequently preventing a late June theatrical release, China’s often-capricious censorship authority (the SARFT) greenlit the film in late October. Since then, the movie has topped the Chinese box office, raking in over a billion yuan.

Fans of Zhou Dongyu’s prior works will enjoy how Better Days gives her a chance to expand her repertoire beyond romantic dramas. For broader audiences, Better Days offers a dark and brutally realistic portrayal of campus bullying that’s emotionally heavy, but a worthwhile watch.

Zhou stars as Chen Nian, a mild-mannered girl with a single mom heavily in debt. Her only hope to live a better life is to score well enough on the gaokao to attend a top university. Chen’s not exactly the most popular girl on campus. Her only friend is Hu Xiaodie, who happens to be the bullying target of a clique of “mean girls” led by the well-to-do Wei Lai.

While some of Zhou’s previous films were tragic (i.e. My Old Classmate), none come close to the emotional weight of Better Days. Her prior work tended to tug on audiences’ heartstrings in the form of coming-of-age dramas or relatively light-hearted romantic comedies. Better Days pulls instead on the tougher strings of mental trauma. Better Days in that sense is an acting breakthrough for Zhou; her portrayal of Chen Nian shows that Zhou can progress beyond her roles in romantic dramas.

Better Days makes its dark and heavy undertones apparent early on. Within the opening minutes of the film, Hu commits suicide by jumping off the school’s building. While Chen Nian grapples with the suicide of her only friend, she also has to deal with questioning from police and school officials, as well as new attention from Wei Lai’s clique.

Perhaps as a coping mechanism, Chen Nian initially shows little emotion—whether sadness at her only friend’s death, or fear when confronted by Wei Lai. This a departure from the more emotive characters that Zhou usually portrays. It’s not until Chen Nian meets dropout and street fighter Xiao Bei (Jackson Lee from TF Boys) that she finally begins to open up.

Far From a Love Story

For a moment, Better Days seems like it could be a love story—while the film doesn’t focus on the romantic development between Xiao Bei and Chen Nian, there are scenes which hint at it. However, Better Days is far from a romance film. Despite some moments exploring Chen Nian and Xiao Bei’s budding relationship, much of the film centers on mental trauma that bullying inflicts.

The response of the school authorities to Chen’s bullying allegations (or the lack thereof) is fairly realistic. School officials are reluctant to inflict penalties against Wei Lai’s clique; they’re let go with a mere slap on the wrist after much lobbying from their parents. This only increases Chen Nian’s frustration and makes her lose faith in the “system” meant to protect adolescents.

For some of us, these events may seem too familiar. Schools in the US sometimes ignore bullying allegations. Students in China might fare worse than their American counterparts. Many Chinese students have absentee parents working in far-away cities, leading to parents being less able to support their children emotionally. Still, it seems that both American and Chinese adolescents face indifference from adults in their lives when it comes to bullying.

The mild-mannered Chen Nian eventually lashes out in an extreme way when she finds no way out of her predicament, with no help from school or police authorities alike. Most of the latter half of the film deals with the aftermath of this lashing out. We won’t offer any spoilers, but after the emotional roller coaster of the first half, the final hour of the film is almost a relief. The parallels to real life are jarring as well: bullying victims have been known to lash out in tragic, violent ways.

Invisible Hand of the Party

The events of Better Days do not reflect well on China’s school administrators or local authorities. Perhaps this is why the film was initially censored, and it’s likely that the team behind Better Days had to make numerous editorial concessions to make the film viable. Some of these concessions are more obvious—an afterword at the end of the movie walks through some policy changes that the Communist Party introduced to combat campus bullying.

Other concessions are less obvious. Did the ending of the film change at the request of censors? Did the producers have to cut some more brutal or graphic scenes of bullying? It’s likely we’ll never know what Tsang’s original vision for Better Days entailed, due to the extraterritorial, global reach of Chinese censors. SARFT imposes multi-year bans against filmmakers who defy their authority, denying them access to the vast mainland Chinese market. We might hope that an uncut original version of Better Days could be released outside of China, but it’s unlikely that Tsang would risk rebuke from China’s censors to make that happen.

However, even after some “guidance” from Beijing, Better Days is still a gripping melodrama. It’s always a joy to see Zhou Dongyu in emotionally complex scenes, and Better Days gives her the opportunity to stretch herself into the dark, from the simply tragic. While taking an emotional toll, the all-too-realistic bullying scenes also make the film more realistic and empathetic for audience members. State-run newspaper China Daily argues that even bullies will find some relatable moments.

One netizen on Chinese movie review site Douban expressed hoped that “society can pay more attention to these kinds of problems so our children don’t lose hope in the future.” Cinema ultimately plays an important role in the kinds of issues that society prioritizes (medicine costs in Dying to Survive come to mind). Despite potential headwinds from censors, we hope that Chinese filmmakers continue to represent challenging narratives and push for better days for all Chinese in real life. 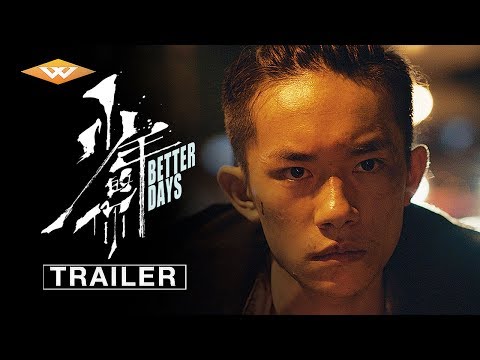