Put “Kazakhstan” and “movie” together in the same sentence, and most English-speakers will probably think of Borat—which, while a hilarious critique of American ignorance, paints a wildly inaccurate picture of Kazakhstan that many Westerners have unfortunately internalized.

Therefore, it felt quite exciting to see Kazakh film Yellow Cat on the program for 2020’s Venice International Film Festival. The film looked promising: its director Adilkhan Yerzhanov had previous titles screened at Cannes and Rotterdam, and an early trailer offered snippets of a whimsical, well-shot story. Perhaps this would be an opportunity for international audiences to expand their view of Kazakhstan and its filmmaking prowess.

After actually watching Yellow Cat, I can report that it indeed contains whimsy and gorgeous visuals, which are part and parcel of a deadpan dark comedy that sprawls across the Kazakh steppe. However, the film will not spark a sea change in international cinematic attitudes towards Kazakhstan. Instead of a deep, resonant story that fully utilizes its Kazakh context, Yellow Cat feels more like a series of thinly grafted vignettes. It also caters heavily to hardcore fans of classic cinema, rather than broader contemporary audiences.

“He’s got a girl, a gun, and a dream” — that’s the tagline for Yellow Cat, and it’s a pretty apt description. The “him” in question is Kermek, a recently released prisoner who the mafia have conscripted to collect protection money. On one of his collection rounds, Kermek meets a quirky girl named Eva who serves the mafia as a prostitute; without much explanation or exposition, the two develop a rapport. Shortly thereafter, Kermek refuses an order to kill a mafia debtor. He steals a gun, picks up Eva, and goes on the lam with her—hoping to escape the mafia and realize his dream of opening a movie theater in the mountains.

The film proceeds as a series of chapters, each heralded by childishly drawn title cards that manifest as pieces of paper lying in the dirt. We see Kermek and Eva’s Bonnie and Clyde-esque escapades through the beautifully desolate Kazakh steppe. Mafia members and paid-off police halfheartedly chase them in scenes filled with dark absurdity and quirkiness. In one moment, a corrupt police officer and mafia member slide towards Kermek and Eva on a tiny scooter. In another, cops close in on the pair—but inexplicably end up taking potshots at each other instead. There’s violence and privation, yes, but it floats along with a bleak yet mellow lightness, accentuated by the protagonist couple’s oddball tendencies, free from any deeper meditations about life.

The Samurai and the Manic Pixie Dream Prostitute

Much of Yellow Cat’s quirkiness comes through Kermek’s love for classic Hollywood and French cinema. The film begins with Kermek claiming that he can act out every scene from Jean-Pierre Melville’s 1967 neo-noir Le Samouraï; references to Le Samouraï and its star Alain Delon become a recurring motif throughout the rest of Yellow Cat. Kermek also randomly performs a scene from Martin Scorsese’s Casino, and later dances to the music of Singin’ in the Rain.

It’s laudable how Yellow Cat keeps general audiences in mind by literally naming each of the films before making each reference. However, we don’t learn much about Kermek beyond his love for cinema. Eva has even less character development; she’s a manic pixie dream prostitute whose only role seems to be helping Kermek embrace a zest for life. This means Yellow Cat will likely only resonate with cinephiles who can see themselves in the classic film-appreciating Kermek. All other audiences will find it difficult to build a connection with the two leads.

In press notes for Yellow Cat, director Adilkhan Yerzhanov mentions how Kermek is supposed to parallel a hero from Kazakh folklore named Ertostik. Unfortunately, there’s absolutely no easy indication of this for viewers who are neither members of the press nor knowledgeable about Kazakh folklore. In fact, cursory research through the limited English-language sources available indicates that Ertostik is a fairly triumphal character associated with “adventure, courage, valor, and an amazing love story”—which, other than adventure, don’t seem very present in Yellow Cat.

Beyond exposing viewers to sweeping shots of the Kazakh steppe and occasional use of the Kazakh language (much of the dialog seems to be in Russian), Yellow Cat doesn’t help international audiences learn much about Kazakhstan. Granted, director Yerzhanov perhaps didn’t aspire to make Yellow Cat a “quintessentially Kazakh” film nor educate foreigners. However, accessibly showcasing Kazakhstan’s cultural context—like Parasite did for Korea—would’ve made Yellow Cat more interesting and complex.

If you’re a fan of classic cinema, or the type of person who recoils at viewing movies through a sociopolitical lens and only wants to appreciate them as fine visual art, you will probably enjoy Yellow Cat. Other audiences may have more mixed reactions. 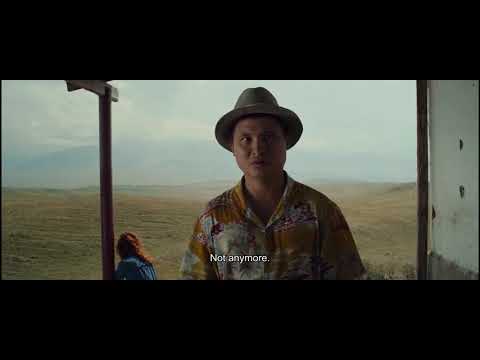 Review: "The Song of the Tree" Is Like "La La Land" With Central Asian Nomads

Review: "The Song of the Tree" Is Like "La La Land" With Central Asian Nomads