China has a long history of law enforcement along its coastline with the imperial navy tasked with defending its coastal waters from Japanese pirates and local raiders. However, it wasn’t until 2013 that China truly had a unified coast guard, dedicated to domestic maritime law enforcement. It’s only fitting that China’s newest paramilitary force gets its turn on the silver screen: Dante Lam’s The Rescue showcases the heroism and capabilities of China’s Coast Guard (中国海警).

The Rescue is a follow up to Lam’s previous action films celebrating Chinese force projection. His 2011 film Operation Mekong showed Chinese police working along the Mekong River to interdict drug smuggling gangs, while his 2018 hit Operation Red Sea showed that China too can deploy special forces to the Middle East. The Rescue differs from his prior works however, in that the “action” in the film revolves around the Chinese Coast Guard’s search & rescue functions, rather than its law enforcement side. In that sense, The Rescue lacks the gun battles that pumped Lam’s prior works full of adrenaline, but still contains daring rescues and demonstrations of bravery.

The Rescue is notable for its highlighting of an increasingly relevant arm of China’s naval power projection. The Chinese government recently tasked its Coast Guard with enforcing its territorial claims in the South China Sea, and in the past has used the Coast Guard to enforce its claims over the Diaoyu Islands. Certainly, the Coast Guard allows China to have an element of finesse when it comes to foreign policy: not every geopolitical situation is best solved with a Naval Destroyer. The fact that the Coast Guard is a law enforcement and search & rescue force offers Beijing a less forceful alternative for hard power projection, despite the fact that the China’s Coast Guard operates a number of ships transferred from its Navy, and a number of ships that outclass American missile cruisers.

The film opens with a fleet of helicopters making a daring rescue: an oil rig caught fire and is about to explode, and the Chinese Coast Guard must save its crew. Captain Gao Qian (Eddie Peng, who also headlined Operation Mekong) hangs from a rescue winch rope before jumping onto the platform, dodging fires and collapsing structures to save two grateful oil rig workers.

Unfortunately, in the process, shrapnel injures the helicopter pilot, leading to his early retirement after the squad returns to base. We’re then introduced to the team’s new (female) pilot, Fang Yuling (Xin Zhilei). The film takes advantage of the team’s downtime to give more backstory to its characters. We learn that Gao is a single father, whose young, shy son has a difficult time in school. Fang later tells Gao that she joined the Coast Guard as a pilot in memory of her father, who was also a pilot.

While the film makes a good amount of effort to ensure that both of its main characters have a well thought-out backstory, we can’t help but think that the screenwriters simply looked for stereotypical, trope-y characters that would fit in any Hollywood action blockbusters.

Unfortunately, beyond the cookie-cutter characters, The Rescue doesn’t get much better with its screenwriting. The film centers around a few daring rescues, involving acrobatic and athletic stunts on the part of Gao and Fang’s helicopter rescue squad. While the circumstances of each rescue are unique, the actual rescue itself plays out in a predictable way; nature exerts its forces, putting our heroes in peril, but our heroes prevail and save the lives of the common people.

As a result, there’s a total lack of suspense throughout the film, making it easy for audiences to lose interest over it’s two-hour-plus running time. Even the interpersonal drama is predictable: Gao’s son asks him repeatedly when he’ll get a new mom, and tries to pair up his lonely father with Fang. It wouldn’t be much of a spoiler to ask our readers to predict how that character arc turns out.

All that said though, the film remains a solid watch for action fans. The rescue scenes showcase impressive visual effects, whether it’s a truck falling down a cliff into a river, or an airplane making an emergency water landing after hitting hail in a storm. Eddie Peng also shines in his dual role as both an action man and father figure, offering an alternative to Wolf Warrior‘s Wu Jing as a male sex symbol. The Rescue also eschews any deus ex machina or plot armor; the characters face real danger, and don’t always make it out unscathed.

However, it’s not like Hollywood doesn’t also produce action films that serve to glorify American military forces. The US Defense Department is notorious for funding movies and series that make US servicemembers look good and encourage young Americans to join the armed forces such as Top Gun or JAG; it’s also not like films such as Independence Day or Battle: Los Angeles are particularly deep.

Still, as with our criticism of prior Chinese action films like Sky Hunter, at times The Rescue feels like a recruitment video for the Chinese Coast Guard rather than a commercial blockbuster. Perhaps that was intentional; a Xinhua article noted that Lam was “determined to bring the stories of these unsung heroes to the big screen […] after learning about the [Chinese Coast Guard].”

However, we hope that Chinese filmmakers can continue to hone their skills, and produce military-themed action movies that are more similar to Assembly in their depth, rather than simply churning out vapid action blockbusters. While not necessarily poster children for military recruitment, films like Assembly succeed in garnering true empathy from audiences for their honest portrayal of servicemembers’ struggles.

Chinese netizens also had mixed opinions. While the film got a 6.3 / 10 rating on Douban, one commentator said that The Rescue sank to the ranks of non-stop propaganda advertisements (“影片沦为鬼打墙一般循环播放的公益广告合集”). However, that’s not necessarily a bad thing; if the goal of the film was to simply make China’s Coast Guard look cool, it certainly succeeded. Between action-packed rescues, acrobatic stunts, and scenes where civilians laud the bravery and heroism of China’s Coast Guard, The Rescue at least makes for good propaganda, even if it’s lacking in dramatic complexity. As Hollywood has shown us, there’s no need to appeal to legions of film critics in order to have broad, mass-market appeal. Certainly, the Chinese box office agrees; in its opening week, The Rescue led box offices, defeating Wonder Woman 1984 to earn US$36.3 million in its first three days. 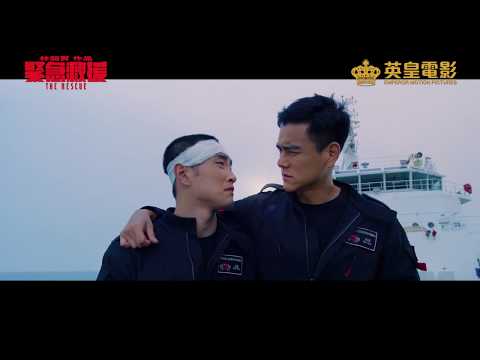