"The Eight Hundred" advances timely political viewpoints, but fails to showcase the camaraderie and empathy of other good war movies.

The Eight Hundred was one of the most anticipated Chinese movies in recent memory, before concerns from government officials pushed its 2019 release back to 2020. The film is one of the first to screen in Chinese theaters post-COVID; CMC pictures concurrently released The Eight Hundred in North American and Australian theaters.

The Eight Hundred tells the story of a group of Republican (Nationalist) Chinese soldiers tasked with defending Shanghai’s Sihang Warehouse in 1937 during the Second Sino-Japanese War (the Chinese theater of World War II). In both real life and the film, a little over four hundred soldiers (exaggerated to eight hundred by their commander) held a warehouse across a river from the foreign concessions in Shanghai, in the hopes that their valiant efforts would be noticed by Western media to add pressure for a peace settlement with Imperial Japan.

The film is rooted in the real life facts of the battle, but falls short in the traits that normally make for a good war movie. Notably, The Eight Hundred fails to create emotional connections between the audience and its protagonists, and lacks any sense of camaraderie among the defenders of Sihang Warehouse.

No Justice Given to Chinese Heroes

At the outset, The Eight Hundred spends significant effort juxtaposing the Sihang Warehouse against the glitzy foreign concessions, which Japan did not invade until after the Pearl Harbor attack in 1941.  With Japanese invaders at their throats, the soldiers tasked with defending the warehouse look longingly across the river at their more fortunate civilian counterparts every night.

As the film progresses, a number of Chinese nationals in the concession try to raise funds for the defense of the warehouse (to the chagrin of the concession’s British administrators). One woman, Yang Huimin, manages to swim across the river to deliver a Chinese flag to raise morale for the troops and bring journalists to capture the stories of the warehouse defenders. In another scene, Chinese civilian volunteers attempt to run a phone line across the bridge connecting the two shores of the river, only to be killed by Japanese snipers.

However, these depictions of heroism feel contrived at best. Most of the characters who die are faceless and nameless, and the audience has no opportunity to build a personal connection with them that drives home the sense of loss that one expects from a war movie.

For example, the film opens by showcasing a group of soldiers who retreated from a northern Chinese army that the Japanese previously defeated. These soldiers try escaping to the Western concession, but fail in their attempts. However, The Eight Hundred does not reveal any details about their efforts in northern China, nor do they memorably portray their deaths in Shanghai. These soldiers seem to die off randomly from enemy fire, before the audience actually gets a chance to know them.

In Western media like Saving Private Ryan and Band of Brothers, the audience has a chance to form an emotional and personal bond with the characters before they die in combat. In contrast, the deaths portrayed in The Eight Hundred are best described by a Stalinist quote: “the death of one man is a tragedy, the death of millions is a statistic.” The Eight Hundred contained little tragedy because it was just a compilation of many deaths, rather than the story of any individual death.

That’s not to say that the soldiers defending the Sihang Warehouse in real life did not deserve admiration; they were tasked by a government with an impossible mission and expected to die for points in a game of international relations. However, The Eight Hundred did a poor job of portraying the individual tragedies of the battle.

Loyalty to the Nation

Still, it’s worth paying attention to The Eight Hundred from a political perspective.

Though imperfect, the film highlights the inaction of Western governments against Japanese aggression, as well as the complicity of Chinese refugees in the concessions.  While young soldiers valiantly fight to the death against Japanese invaders on one side of the river, Chinese civilians who escaped to the British concessions gamble in casinos and watch Chinese opera shows. This message seems especially relevant amidst rising tensions with the West and resurgent Japanese militarism. Proving “loyalty” to the Chinese nation has come into renewed focus, and perhaps The Eight Hundred is trying to ride this wave.

Furthermore, it’s historiographically significant that China’s film industry and film censors have chosen The Eight Hundred to mark the nation’s post-COVID box office resurrection. As previously mentioned, the troops involved in the Battle of Sihang Warehouse were Nationalists—whom the Chinese Communist Party eventually defeated and exiled to Taiwan. Contemporary Chinese films and television about the Second Sino-Japanese War have usually avoided portraying Nationalist troops in favor of the Communist Eighth Route Army. In fact, the last cinematic portrayal of the Battle of Sihang Warehouse came from Nationalist-controlled Taiwan via 1977’s Eight Hundred Heroes. With 2020’s The Eight Hundred, Beijing is perhaps signaling that loyalty to the Chinese nation must persist regardless of historical political affiliations.

However, in doing this, the filmmakers (or government censors) seemingly lost track of the essence of a good war movie: making the audience feel like every soldier who dies on screen is a personal friend. This is a pity even from Beijing’s perspective. Greater character empathy would have more effectively spurred patriotic sentiment, while also appealing better to international audiences. While The Eight Hundred had tremendous potential, its execution unfortunately comes up short.

Overall, the film is still worth a watch if you’re interested in Chinese history and politics. If the political message doesn’t interest you, at least The Eight Hundred has decent special effects amidst explosions and gun battles. 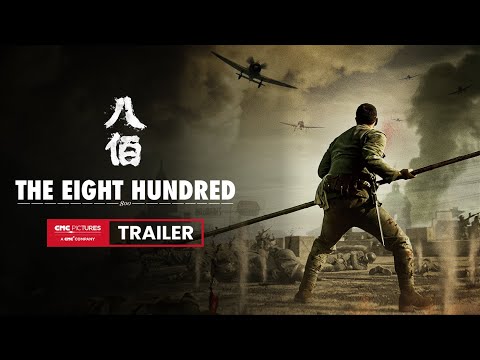