What would you do if you had a second chance to relive your youth? Would you do things differently? Or perhaps you’ve lived your life without any regrets?

Based on the Korean blockbuster Miss Granny, the Telugu-language Indian film Oh Baby! tackles these questions with a story about a 70 year-old matriarch nicknamed “Baby” who gets a second chance at youth. While Oh Baby! stays faithful to its Korean source, it also makes artistic choices catering to an Indian audience—altogether creating a charming, though slightly overwrought, family-centric story.

A Second Chance at Youth

Baby, a widow who runs a restaurant and lives with her son’s family, initially seems naggy and rude. Her disgruntled attitude is the product of hardships she endured as a youth. Though Baby aspired to be a singer, she instead got married young to a soldier, who died in the Sino-Indian War of 1962 shortly after she gave birth to their son Sekhar. Baby then sacrificed her own ambitions and dreams to raise Sekhar, who becomes a university professor with a beautiful home and family.

After a frightening incident with Sekhar and his wife, Baby starts to realize she might be a burden on the family. Confronting her own mortality, Baby decides to take a funeral photo at a studio adorned with photos of India’s Audrey Hepburn, Savitri Nissankara. When the mysterious studio proprietor’s camera shutter clicks—lo and behold—she turns into a young woman in her 20’s (played by Samantha Akkineni). God has finally given Baby a second chance at youth.

Korea’s Miss Granny has already seen successful adaptations in five Asian languages. However, given Indian cinema’s general preference to look West for “inspiration”, so it did come as a surprise that Indian producers wanted to do an adaptation of Miss Granny into Telugu (a South Indian language).

Oh Baby! provides a faithful adaptation of Miss Granny, at least in the first half. Director Nandini Reddy decided to almost replicate the Korean original scene-for-scene, borrowing not just the main narrative and characters, but also peculiar details from within those scenes. For example, young Baby’s hairstyle is pretty much identical to Shim Eun-Kyung’s hairstyle inspired by Audrey Hepburn, and not that of Savitri Nassakara.

In her press conference about the movie, Nandini Reddy talked about how she really enjoyed the Korean original and wanted to be faithful to it as much as she could—while localizing the content enough that it wouldn’t seem foreign to Indian audiences. Her localization choices offer a good opportunity to compare cultural differences between South Korea and India.

For one, Oh Baby! emphasizes religion much more than Miss Granny. Baby constantly complains about God and what she’s done to deserve such bad Karma. Consequently, Oh Baby! portrays her transformation into a young woman as God repaying his debt to Baby for all the sacrifices and hardships she had to struggle through. Korea’s Miss Granny didn’t touch upon this theme at all. Compared with Korea, India is still deeply religious—with 99%+ of the population purportedly believing in some faith.

Oh Baby! also highlights the role of marriage in romantic relationships. Newly youthful Baby’s “fling” with a music producer named Vikram (Naga Shaurya) culminates in a marriage proposal—something that didn’t happen in the film’s Korean counterpart. While perhaps Western and Korean audiences are perfectly fine accepting film relationships as “flings”, Indian audiences would find Baby and Vikram’s relationship unsavory if marriage wasn’t the goal. After all, India is still a country where arranged marriage still accounts for 84% of all marriages, and “dating” usually means “arranged dating.”

What worked? What didn’t?

One reason I enjoyed Oh Baby! was actress Samantha Akkineni’s excellent portrayal of the young Baby—probably the movie’s strongest element. Akkineni did a superb job of convincing audiences that an old woman really did turn into a 20 year-old, injecting senior citizen hijinks into energetically youthful situations. For example, there’s a famous scene where Baby starts croaking at and beating up Vikramwith a big calabash (in Miss Granny, it was a fish). Comically charming scenes like these made the original Miss Granny a huge pan-Asian hit, and I’m glad that Oh Baby! did its Korean source proud on this front.

However, director Reddy’s insistence on hyper-dramatizing scenes in the second half of Oh Baby! really diluted that initial charm. Perhaps Reddy wanted to cater to an Indian desire for melodrama. However, I believe melodrama needs to contribute to a narrative, not just exist for its own sake.

Reddy doesn’t seem to share that view, as many scenes in the back half of Oh Baby! turn into rampant melodrama for melodrama’s sake, rather than adding storytelling depth. For example, there’s a 10-minute sequence when Baby’s older male friend helps youthful Baby with a foot injury. The friend’s daughter walks in on the scene, mistakes it for an intimate encounter, and starts wailing—causing the neighbors to show up and wonder what’s wrong. In Miss Granny, the equivalent scene had a more humorous portrayal of the scene as a misunderstanding. However, Oh Baby! made this and other scenes in the second half go off the deep end with unnecessary emotional weight and awkwardness. If Reddy had been a bit more faithful to the nuanced emotions of her Korean source, I think she would have had a much stronger film.

Ultimately though, Oh Baby! is still funny and charming; Samantha Akkineni’s performance alone is well worth the watch. The film offers (at least for the first half) a faithful re-adaptation of Korea’s Miss Granny, and does a great job of keeping the humor and charm of the original, while tweaking the context just enough for Indian audiences. If you can look past the over-dramatization of Oh Baby’s second half, I think you’ll enjoy the movie as much as I did. 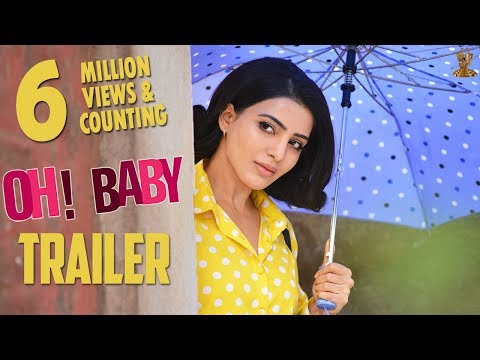