"Palmyra" director Ivan Bolotnikov discusses his artistic take on how a father from Dagestan tries to bring his daughter back from the Islamic State.

Between 2014 and 2017, over 40,000 individuals from 80+ countries outside Syria and Iraq joined the Islamic State of Iraq and Syria (ISIS). While English-language media tends to focus on ISIS recruits from Western countries, a significant number of recruits came from Dagestan: a region of Russia with a diverse, predominantly Muslim population and recent history of conflict.

Amidst economic malaise and lingering distrust of Russia’s central government, 1,200 Dagestanis—including women and children—joined the Islamic State. That number is more than the number of ISIS recruits from Germany and Belgium combined, and an extremely high per capita rate given Dagestan only has 3 million people.

Funded in part by Russia’s Ministry of Culture, Palmyra follows a Dagestani doctor named Arthur who travels to the Islamic State in order to find his daughter Maryam. Through Arthur’s eyes, the film offers a humanistic meditation on the impact of ISIS recruitment on a family. Few if any feature films have depicted this topic thus far (though several television shows did).

While Palmyra leans heavily into art house sensibilities which may regrettably limit its appeal, the movie still offers a rare view into a region of the world, and geopolitical phenomenon, that deserves more attention on the silver screen. International viewers may also derive valuable learnings from how the film implicitly conveys Russian perceptions of the Syrian Civil War.

Cinema Escapist caught up with Palmyra director Ivan Bolotnikov amidst the Busan International Film Festival to learn more about the film. Bolotnikov shared details behind the film’s production, and reflected prevailing attitudes in Russia around how Dagestan might benefit from stronger integration with the central government.

Can you tell us more about your inspiration for the film? I’ve heard it is based on a true story. What are the details of that story, and what about it attracted you?

The story of Palmyra’s protagonist Arthur has a real basis. However, the film goes beyond that basis to reflect how, given recent world events, humans have reached some sort of inescapable dead end.

The name “Palmyra” intends to evoke that bleak feeling.

Located in present-day Syria, the city of Palmyra was a center of trade and culture during ancient times; it was an incarnation of human perfection. During the Syrian Civil War, ISIS captured Palmyra and destroyed much of its ancient architecture—this act of barbarism shook the world.

Therefore, Palmyra represents a contrast between perfection and destruction. It reminds us how, despite all the progress we’ve made as humans, we can always regress to something more deep and primordial.

We wanted to be as genuine as possible, but still leave room for creative license.

Our crew visited Syria; originally, we were going to shoot there. We saw many cities and towns destroyed by the war.

I remember a town that entirely consisted of half-destroyed buildings of one or two stories. In this town, some plants still bloomed in the gardens, and some taps were still running. Abandoned things and half-erased inscriptions on the walls were everywhere. Only the people were missing; there was a ubiquitous silence. It was a bit like Ray Bradbury’s The Martian Chronicles.

We then learned an affluent population once lived in the town. However, the townspeople embraced ISIS’s radical ideology, and fought for every single house against Syrian government forces. Despite the fact they had material wealth and could feed themselves, somehow they still decided to embrace the “truths” that ISIS advocated.

From viewing scenes like that, we began to realize just how complex and constantly evolving the situation in the Middle East really is. We felt it would be impossible to keep up with events in the region, and realized we should approach the film as an allegory and generalization instead.

Palmyra’s main characters are from Dagestan, a Russian region with a rather unique social and political situation. What background information about Dagestan do you think it’d be helpful for non-Russian audiences to know in order to better appreciate the movie? Separately, to what extent do you think this movie either reflects or challenges domestic Russian perceptions of Dagestan?

Most Russians don’t know much about Dagestan. We see it as a place of mountains and plains, with dozens of different tribes. In some senses, the Russian language is the only thing that connects Dagestan and the rest of Russia.

Yet, I feel Dagestan has a significant need for Russia—to be with Russia, to feel a part of Russia—despite the uniqueness of its lifestyle and mentality. This is because people need something that will give them a sense of connection and support—and that’s what a state provides.

In Dagestan, that sense of connection currently comes from Islam, not as much the state. For example, in Dagestan’s capital of Makhachkala, it is hard to buy alcohol, and there are special places to pray in venues like cafes.

That lack of connection with the state can have serious consequences. I remember a very naive local taxi driver who asked many questions about Syria, and told me that life should be better there. At ISIS’s peak, entire villages—women and children included—moved from Dagestan to Syria seeking a better life. Unfortunately, I fear many of them have died somewhere in Syria.

[Read: Meet This 21 Year-Old Syrian Who Shot an Oscar-winning Film]

As mentioned in other interviews, Palmyra has had a long gestation period. In 2017, TASS reported that Proline had partnered with Syrian company Shaghaf to shoot half the movie in Syria, and the story was originally about a doctor and his wife (as opposed to his daughter). Things obviously changed since then. If you had been able to shoot in Syria and do a full Syrian co-production, in what ways might Palmyra be different? Were there any scenes or plot elements that you really wanted, but had to discard because of the change in Syrian involvement?

Yes, Palmyra’s story did change as a result of not being able to shoot in Syria. The story became more straightforward and more complicated at the same time.

Originally, we wanted to shoot in Syria to have a documentary style. However, this created some creative restrictions. For example, as you see in our film, we aimed to depict a hospital located in an ancient oriental building, filled with old equipment. However, under actual ISIS rule, hospitals apparently were located underground and were very well-appointed. Therefore, shooting in Syria might not have conveyed the tone we wanted to convey.

Nevertheless—we had a Syrian consultant help us during the shoot, and monitor the accuracy of the scenery. He didn’t find any significant contradictions.

Editor’s note: Non-ISIS Syrian opposition groups have used underground hospitals, as seen in media like the 2019 documentary The Cave. ISIS has used underground tunnels in other, non-medical settings.

Back in 2017, producer Andrey Sigle previously described the film’s protagonist as a “hero”—do you still think that’s an appropriate description of Artur?

Perhaps not anymore. Everything is more complicated and ambivalent in the film.

However, I’d still say that, thanks to the performance of actor Geza Morcsányii, Arthur turned out to be alive, real, and empathy-evoking.

Russia has one of the few active programs to repatriate children and orphans of IS fighters and reintegrate them into society. Palmyra depicts the impact upon families when a member joins IS, and hints at the challenges of properly reintegrating IS returnees. What do you think the international community can learn from Palmyra’s story, and perhaps Russia’s example more broadly?

During the first days of shooting in a Dagestani village high in the mountains, a crying woman from a nearby town came to us, and asked if we could shoot a film with another plot. She said that her daughter, her son-in-law, and their children all went to Syria and never came back.

It’s a tragedy what’s happened. But what can you really teach people beyond the essentialness of humanity, empathy, and caring? Those are the only ways we can try to save ourselves, and others. 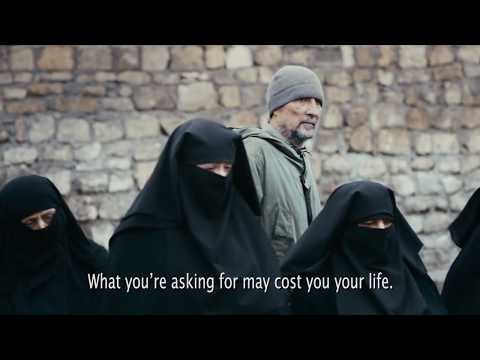 Palmyra screened at the 2020 Busan International Film Festival. This interview was edited for clarity and length.

Review: "Salyut 7" is Russia's "Apollo 13" — With A Geopolitical Twist

Review: "Salyut 7" is Russia's "Apollo 13" — With A Geopolitical Twist