Review: “El Perro Que No Calla” Is A Slow-Moving Drama That Just Misses the Mark

Shot in black and white, the newest film by Argentine director Ana Katz hints at various themes, but fails to commit to these ideas.

El Perro Que No Calla (“The Dog Who Wouldn’t Be Quiet”) seemed like a promising film. Premiering at the 2021 Sundance Film Festival’s World Cinema Dramatic Competition and shot entirely in black-and-white, this most recent film from Argentine director Ana Katz showed potential on both artistic and narrative levels.

Unfortunately, its stark cinematography hides a narrative that lacks momentum and fails to materialize in any meaningful way.

The film follows Sebastian (played by Daniel Katz), a man in his 30’s who is struggling to find steady work as a graphic designer. In the film’s short 73-minute runtime, we see a surprising variety of moments in Daniel’s life, as he bounces between jobs and navigates falling in love, becoming a parent, and dealing with grief.

The title of the movie may refer less to a literal dog and more to Sebastian himself, as he moves from job to job without a place to rest. At one point in the film, a friend of his mother criticizes Sebastian, saying, “he has never committed to anything”. Even at a wedding, when everyone is dancing, Sebastian is alone and isolated, looking for a brief moment of connection with another dancer. In many moments throughout the film, he appears to connect more with dogs than with people.

Sebastian’s struggle to find employment and meaningful relationships is a narrative that has potential to resonate with a wide audience of millennial film lovers. It may be especially relevant for those facing career struggles as the result of the COVID-19 pandemic. In fact, later in the film, the current pandemic is alluded to even more explicitly. During the film’s final section, humanity is suddenly plunged into catastrophe when a meteor hits, resulting in a bizarre pandemic that requires people to wear a bubble helmet in order to stand up straight.

In many ways, El Perro Que No Calla evokes Roma, another film by a Latino director with beautiful, black-and-white cinematography, and a story that is focused less on a narrative and more about capturing moments in a life. Unfortunately, it lacks the artistry and emotional depth required to carry the film in this way.

There are a few obvious strengths to El Perro Que No Calla. The black-and-white cinematography pairs with a deep focus lens to create some beautiful shots, and the soundtrack is marvelous. One of the best scenes features Sebastian playing with his dog outdoors in a fleeting moment of joy. With instrumental piano layered over the top, it is a lovely moment and feels extremely natural. After all, the dog does not know it is in a movie.

As a whole, the film’s conversations feel natural, which speaks to the talent of the actors. Katz’s subdued performance as Sebastian is a bit dull at times, but this may be due to the screenplay rather than the actor. The screenplay feels very loose and the pacing is unbalanced. Many scenes drag on for longer than the need to, while pivotal plot points happen in seconds. In a film that is only 73 minutes long, it is astonishing how many shots outstay their welcome.

The most jarring plot point is the meteor and the subsequent plague, which is only introduced in the last quarter of the film. This sudden shift feels misguided and tonally incongruent, transforming this film from a poignant drama about employment into some sort of absurdist sci-fi disaster movie for the final 20 minutes. It is hard to feel connected to Sebastian’s emotional journey when he is walking around squatting down or wearing a fishbowl on his head.

Some directorial decisions also feel a bit misguided, particularly the choice to use static drawings to convey crucial plot points. It is a bold artistic move, but ends up feeling unnecessary, as this is only used twice throughout the film. The direction also feels claustrophobic, especially during indoor scenes as the handheld shaky cameras move in close to the actors faces. This is a minor issue, but further distracts from the viewer’s ability to connect with the story.

The most compelling message throughout El Perro Que No Calla is a critique of our current economic system. A sense of economic hardship underlines all scenes, as Sebastian looks for employment that feels impossible to find.

In one scene, he asks “What do we call work?” and speaks of delivery drivers risking their lives to make a living. He goes on to discuss what work is valued and what work is not. He is unable to find work as a graphic designer because that is not seen as a valuable skill. A hiring manager comments that anybody can do graphic design, so they do not need to bother hiring a specialist. The only work Sebastian can find is doing manual labour in the fields.

The sudden pandemic becomes a clear critique of the inequality of capitalism. Since the sudden plague only affects people above four feet, the rich buy expensive bubble helmets and stand up tall. Meanwhile, the poor are literally forced to squat down, below the level of the wealthy.

Applying this anti-capitalist lens gives some meaning to what is essentially a slow-moving and unrealized film. However, this thought-provoking critique of economic inequality and the labor market is lost amidst El Perro Que No Calla’s pacing issues and lack of narrative clarity. Black-and-white cinematography can only get you so far if the film lacks emotional connection. 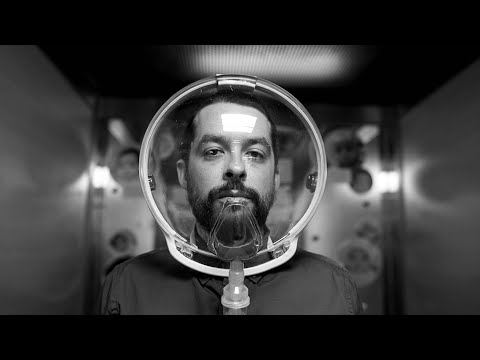