From Korea to Kenya, many cultures idealize youth and love. Rarely do film audiences get a chance to explore love decades after the initial glow, as the infatuation fades and couples grow old together. Uruguayan documentary La Flor de la Vida offers one of these rare chances, with  an intimate exploration of how love can grow or fade with time.

La Flor de la Vida is Spanish for “The Flower of Life”, an allusion to the blooming and eventual decay of both life and love. The film’s tagline asks, “what happens when life lasts longer than love?” This question is explored through a series of incredibly intimate interviews, often played atop archival footage of home movies that contrast the speaker’s aged perspective with the images of life long past. It is a beautiful film, yet it shows that old age can often be an isolating time.

La Flor de la Vida focuses primarily on the story of 83-year old Aldo and his wife Gabriella, who announces that she wants a divorce after 48 years of marriage. The filmmakers stumbled across this story by accident.

Following the success of their first film, Uruguayan directors Claudia Abend and Adriana Loeff began brainstorming for their second collaboration. After deciding that they wanted to make a documentary exploring love, aging, and loss, they prepared a simple newspaper advertisement: “if you are over 80 years old and want to share your story, give us a call.”

They received dozens of responses. Renting out a theatre, they spent several days asking questions to elderly citizens and filming their stories. One of those participants was Aldo, a man bursting with energy and confidence. Describing himself as the perfect protagonist for their film, the filmmakers decided to explore his story in depth. This was a wise decision, as Aldo’s narcissistic tendencies meant that he had an incredible amount of home video footage capturing moments throughout his life. These archived clips are used to great effect throughout La Flor de la Vida, capturing the passage of time.

While the documentary largely focuses on Aldo and Gabriella’s relationship, it also features snippets of other elderly citizens, providing context and insight into the experience of growing old. These meditations on life, love, loss, and age are among the film’s richest moments.

While aging is universal, it is especially relevant for countries like Uruguay. As one of the most developed countries in Latin America, Uruguay also has the oldest population in the region, aside from a few island nations in the Caribbean: at least a seventh of its population is over 65 years of age. Historically, this aging population has been a source of pride. Uruguay has received much praise for its robust social support services for senior citizens, as well as a commendation from the United Nations for its treatment of the elderly.

However, this documentary goes deeper into the lived experiences of senior citizens. It provides perspective on the moments of peace, joy, frustration, and loneliness that an 85 year old may cope with daily, in Uruguay or elsewhere.

From a societal lens, this is one of the most important aspects of La Flor de la Vida. Globally, aging is one of the defining issues of the 21st century. The United Nations Population Report explains that nearly every country is dealing with an increasingly elderly population. While this trend is especially strong in countries like Japan, Italy, and Uruguay, the 65+ demographic is expanding faster than all other age groups across the globe. As many countries around the world are forced to create services for an increasingly aging population, this opportunity to empathize deeply with the elderly is essential.

Despite the increasing number of adults over 65 years of age worldwide, this demographic is rarely represented in film with the level of depth and nuance shown in La Flor de la Vida.For example, one of the documentary’s most profound moments is a montage of Aldo going through his daily life, as Beethoven’s Moonlight Sonata plays. It is a simple and powerful sequence, showing how people continue to look for dignity and fulfilment in their old age. Yet this is not how movies commonly portray the elderly.

A USC Annenberg film study from 2016 analyzed the 100 top-grossing American films of 2015 and assessed the portrayal of characters in their 60s and beyond. The study concluded that the elderly “are underrepresented, mischaracterized, and demeaned by ageist language.” Many movies portray elderly characters in stereotypical ways, such as “frail” or “senile”, while their age is often exaggerated for comedic effect. Such stereotypical depictions may prevent younger audiences from relating to their elderly friends and relatives, while alienating elderly viewers.

This increasing alienation can be especially damaging for the elderly, as many senior citizens are already isolated. For example, a report by the United Nations in 2017 found that nearly one in four Uruguayan citizens over the age of 65 were living alone. This is nearly double that of the regional average.

The high percentage of elderly people living alone may be a factor in the high level of suicide among senior citizens in Uruguay. In fact, a 2015 study from the Universidad de la República in Uruguay concluded that suicide is “a public health problem” among the elderly. The correlation between isolation and depression has been further verified by research from the US National Institute of Health, which also shows that social isolation and loneliness can have other negative health implications for the elderly, elevating risks of coronary heart disease, cognitive decline, and Alzheimer’s disease.

Throughout La Flor de la Vida, loneliness lurks in the background. Aldo repeatedly speaks of his solitude as an 83-year old. In fact, at one point, he comments that loneliness is the reason why he wanted to be a part of the documentary. “All of my friends are dead, except two,” he says, “I have no one to talk to.” It is not surprising that Abend and Loeff’s newspaper ad received dozens of responses from senior citizens who just wanted to talk.

This exploration of loneliness is particularly relevant to our current world, with the COVID-19 pandemic introducing the phrase “social isolation” into common usage. However, many elderly people were already very familiar with this lived reality. While research has shown that the elderly are most vulnerable to the biological components of COVD-19, they are also the most likely to be impacted by the social effect of the global pandemic.

In many countries, the COVID-19 response resulted in the shutting down of many services that the elderly rely on for social interaction, such as libraries and community centers. Given that loneliness and isolation can weaken immune system responses, senior citizens may be stuck in a negative feedback loop that continues to tighten during the pandemic.

The Flower of Life

La Flor de la Vida is far from a perfect documentary. There are some strange editing choices near the end, and the film would be stronger if it highlighted other stories besides Aldo and Gabriella’s relationship, as the short interviews with other seniors show how people experience aging in many different ways. However, it is still a remarkable film, one that provides insight into the experiences of an increasingly isolated population.

Growing old is unavoidable. La Flor de la Vida invites audiences to reflect on our own lives and loves, while also encouraging us to empathize with the older people in our lives. In this time of increased social isolation, that sense of connection is more important than ever. 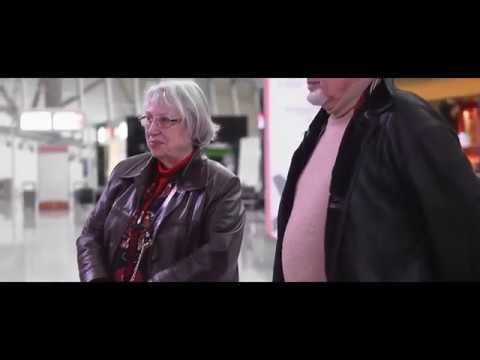 Kieran Davey is a Canadian freelance film writer and a lover of cinema. Currently based in Panama, he has an admiration for beautiful cinematography and a special love for top 10 lists (film or otherwise). Besides writing for Cinema Escapist, he has also contributed to publications such as Spill Magazine, The Playlist, and The Movie Buff.