The protagonist, Freddy, is given a Mazu amulet by his mother shortly before he departs to the US for college. Freddy subsequently stays in the US, eventually becoming engaged to a Taiwanese American woman, Chun.

One day, Freddy loses his amulet and begins to desperately search for it . Fearing that this signifies the loss of his connection to his mother, he begins to dream of Mazu processions. In the story’s conclusion, it is revealed that Freddy’s mother has already died, and that Freddy has been struggling to move on.

One notes that the diasporic loss that the movie describes is, in fact, a common experience—it is not uncommon to have one’s parent pass away while one is abroad, but be unable to be there for the final moments. Taiwan has historically seen a great deal of immigration to the US and this sort of diasporic loss has been reflected in recent film—On Happiness Road is another example of recent film that grapples with a loss that takes place while the protagonist is abroad in the US, this being the death of a grandmother.

That being said, “Kuroshio Current” struggles in many ways. The film seems to aim for a mythopoetic tone, with the film’s opening epigraph derived from Wu Ming-yi’s The Bicycle Thief, and numerous scenes of ghostly fog. However, this is not especially original and seems to depend more on the alien spectacle of Mazu processions for those unfamiliar with them. “Kuroshio Current” strikes as perhaps more unique for a diasporic audience, who may be less used to Mazu pilgrimages, characters that speak in Taiwanese Hokkien, or oceanic symbolism regarding Taiwan. Nor is the symbolism used in “Kuroshio Current” especially creative, heavily relying on temple culture to provide backdrop.

Interactions between Freddy and his fiance, Chun, seem rather stilted and poorly acted. Both characters shift between English and Mandarin quite naturally, in a manner that ably captures the nuances of code switching or switching between multiple languages in a single conversation. But Freddy and Chun’s interactions are wooden and fail to have any real sense of direction.

With the film’s sudden reveal during the climax that Freddy’s mother has already died, Freddy and Chun’s interactions are even less logical. It makes very little sense that Chun would not understand why Freddy feels upset by the loss of an amulet gifted to him by his mother, if his mother died shortly before. As a result, we never see why the two are framed as a good match in the film. Freddy spends most of the film frustrated at Chun for not understanding why he is upset over his lost amulet, and the audience is only ever shown scenes of him angry at her.

Other cross-cultural interactions in the film are also strange. At one point, Freddy visits an American Mazu shrine, to get his fortune told. Despite talking to someone who is clearly a speaker of Mandarin or another Sinitic language, Freddy speaks to him only in English.

Freddy’s inability to get over the loss of the amulet and, eventually, to accept a new amulet that Chun gives him is representative of not only his inability to move past loss, but also to move beyond his relationship with his mother—into adult life and marriage. There are Confucian undertones to this, with the view of Taiwanese society as highly Confucian and family-oriented.

Yet ultimately, this depiction in the film strikes as rather reductive and, in fact, highly stereotyped. Perhaps an apt comparison might be made between “Kuroshio Current” and Tigertail, another US-Taiwan production that told a story of Taiwanese immigration to the US. That being said, the film stumbles for mostly the same reasons, in that the plot fails to come to life, and its depiction of interactions among Taiwanese people is too stiff. 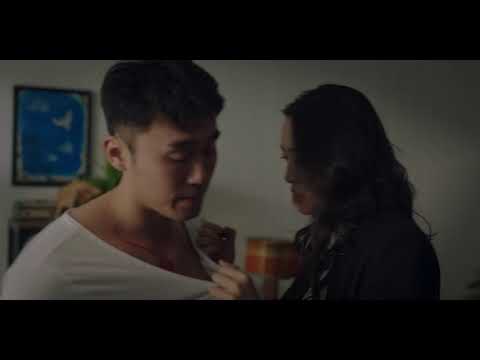 Kuroshio Current is screening at CAAMFest 2021, which has a hybrid online-offline format. Learn more at CAAMFest’s website.