This animated movie perfectly captures Taiwan’s struggles—both in its story and behind the scenes.

Sluggish economic growth, identity crises, and international isolation—such is the plight of Taiwan. Long gone are the days of Taiwan’s economic miracle. Today the island exists in a state of conflicted malaise, on edge yet comfortably numb. It’s this sense of wistful existential crisis that pervades On Happiness Road, the most underrated yet significant Taiwanese movie to come out so far in 2018.

The film—an animation, rare from Taiwan—chronicles a homecoming. When her beloved grandmother dies, a Taiwanese woman named Chi (voiced by actress Gwei Lun-mei) returns from America to her childhood home on Happiness Road. Unfortunately, the road’s delightful name belies Chi’s sense of angst and alienation. With her marriage to a white man in America falling apart and her parents struggling to make ends meet in retirement, Chi attempts to rediscover her existential bearings by reminiscing about her childhood “on Happiness Road.”

What follows is a trace-through of Taiwan’s contemporary history. We learn that Chi was born on April 5, 1975—the day of Kuomintang (KMT) strongman Chiang Kai-shek‘s death. Chi’s life parallels the maturation of Taiwan’s independent national identity, and intersects with many of the island’s social currents.

For instance, when Chi starts elementary school, her teacher announces monetary fines for anyone caught speaking the native Taiwanese dialect instead of Mandarin, as the authoritarian KMT government at the time mandated in line with its claim to rule “all of China.” Chi also befriends Betty, the blonde-haired daughter of a Taiwanese woman and a US Air Force pilot (the US stationed troops in Taiwan until 1979).

As Chi grows up, she slowly gains exposure to Taiwan’s struggle for democracy. When Chi learns that her favorite older cousin was detained for reading a banned book, she begins cultivating a political consciousness. After rising through the prestigious Taipei Girl’s First High School (where she’s classmates with future President Chen Shui-bian’s daughter), she then attends the similarly renowned National Taiwan University and gets caught up in pro-democracy demonstrations.

Home is Where the Broken Heart is

On Happiness Road then marches through Chi’s adult life, with major social and political events in Taiwan acting as time markers. As Chi’s existential woe mounts, landmark moments from Taiwan’s past two decades—the 921 Earthquake, Chen Shui-bian’s 2000 election, the 2008 election of Ma Ying-jeou, and finally the 2014 Sunflower Student Movement—color the background.

By the time On Happiness Road reaches the present day, Chi’s struggles with identity and self-worth seem to mirror those of Taiwan itself. Beyond the “KMT/mainlander” v. “native Taiwanese” divide she experienced in elementary school, Chi also dances with Taiwan’s renewed embrace of aboriginal heritage and increased Southeast Asian ties by virtue of her part-aboriginal grandma and an Indonesian immigrant neighbor. Changing family dynamics in Taiwan come into play as well when the highly educated Chi buts up against traditional expectations from her parents.

While this degree of historical and political authenticity might sound perfectly normal for Hollywood (ex. Forrest Gump) or even Korean (ex. Ode to My Father) movies, it’s extremely rare for Taiwan. Due to an incomplete sense of transitional justice coupled with commercial pressures from an increasingly assertive China, Taiwanese movies rarely depict politics. Simple gestures like acknowledging Taiwan has a president or even depicting the national flag (both of which On Happiness Road does) can trigger Chinese irredentists and stymie the careers of Taiwanese filmmakers and actors. This makes On Happiness Road even more of a landmark film: not only is it animated, but it also doesn’t shy away from Taiwanese politics.

However, director Sung Hsin-yin didn’t make On Happiness Road with political advocacy as her priority.

“I only wanted to faithfully reflect my experience growing up in Taiwan,” said Sung in an interview with Cinema Escapist. “[Anyone who wants to make a movie authentically portraying Taiwan should] first think of a good story, and then think of how history or real events have an influence. If you think of a topic first and then build a story on top, then your movie will end up boring and heartless.”

While this focus on authentically depicting Taiwan closed off investment from mainland Chinese and Hong Kong sources, director Sung recounted how challenges closer to home felt more salient on her long journey to finish On Happiness Road. For one, many in Taiwan’s film industry felt that nobody would want to watch an animated feature that touched on adult themes.

“It’s not that the film industry isn’t willing to work with new directors or films that depict contemporary history. It’s more like they believe animations are only for children, and nobody will be willing to watch a film that talks about these topics through animation,” said director Sung. “Additionally, there’s never been a case of a successful Taiwanese animated feature film, so nobody believed that I, as a new director, could finish the film much less get people to watch it.”

In this sense, it’s not just On Happiness Road’s plot that reflects Taiwan’s existential malaise. Sung’s struggles making the film mirror broader troubles in Taiwan’s economy, which has a conservative business culture that’s notoriously averse to trying new ideas and crippled with self-doubt. Alongside brain drain and low wages, this means Taiwan’s creative industries, film included, are falling far behind those of neighbors like South Korea and China.

Disappointingly, On Happiness Road’s initial box office results seemed to prove Sung’s industry detractors correct. The film only grossed US$430,000 when it premiered in Taiwanese theaters during January 2018, lower than its production budget.

While Sung acknowledges adult animation’s novelty in Taiwan, in a sadly poetic way, Taiwanese self-doubt may have also contributed to this initially anemic performance.

“A unknown director with an adult animation—this inherently was a hard pill for audiences to swallow. [Furthermore,] Taiwanese audiences inherently don’t have much faith in Taiwanese films; this is a widely recognized reality,” said director Sung.

At the same time, On Happiness Road is now receiving significant positive attention from festivals and critics worldwide, which has reinvigorated Taiwan’s—and Sung’s—confidence in the movie.

“Now with awards at international festivals, there’s significantly increased interest. In fact many people are trying to find the film via OTT [streaming services],” said Sung. “I believe that if the movie premiered in Taiwan today, the box office results would be excellent.”

On Happiness Road’s realistic and detailed portrait of Taiwanese life doesn’t come at the expense of relatability. At its core, the movie tells the story of a woman reminiscing about childhood and trying to find her place in the world—a rather universal struggle that many other prominent films address.

As one notable parallel, On Happiness Road feels like the more colorful Taiwanese cousin of Persepolis, the Oscar-nominated 2007 Iranian-French adult animation inspired by its director’s upbringing amidst the 1979 Islamic Revolution. Both films utilize animation to not only portray their subjects growing up, but also grapple with issues of identity, family, and finding a sense of home—in a way that doesn’t minimize sociopolitical context. Like Persepolis, On Happiness Road compels audiences to both laugh and cry as it poignantly conveys the bittersweetness of life—births and deaths, marriages and divorces, nostalgia and forgetting.

Beyond relatable and touching storytelling, On Happiness Road’s visual style creates a distinctive air of wistfulness. For comparison, the movie’s animations feel slightly softer than those in Studio Ghibli films. On Happiness Road utilizes thinner outlines (or sometimes none at all), a brighter color palette, and less pronounced shadow—though it still heavily evokes Ghibli and other Japanese animators like Makoto Shinkai with scenes of splendidly colored skies. All this allows On Happiness Road to remain familiar enough to fans of animations like Ghibli’s, yet convey a uniquely lighthearted aura of nostalgia that complements its narrative.

When asked to compare Taiwanese and international reactions to On Happiness Road, director Sung gave further anecdotal evidence for the film’s relatability against the backdrop of Taiwanese self-doubt.

“I’ve heard many Taiwanese fans wonder if foreigners, or people who didn’t grow up during the same time period, will understand the film. Conversely, international audiences never have that concern,” said Sung.

It’s no surprise On Happiness Road has found success on the international festival circuit. When you’re “on happiness road”, it means you haven’t arrived at happiness yet—and that’s a familiar concept for millions worldwide who’ve fueled a resurgence in existentialism-tinged adult animations like Bojack Horseman or Rick and Morty.

“[With On Happiness Road], I hope that everyone can experience the reality of a Taiwanese girl growing up, and both laugh and cry along. I hope everyone can know that Taiwan has beautiful stories, and can make excellent animations,” said director Sung.

That’s why, despite having an underrated box office performance, On Happiness Road might be the most significant Taiwanese film of 2018. More than any other film this year, it has the potential to put Taiwan on the map.

As director Sung aptly puts it: “Now, when I say ‘I’m from Taiwan,’ I hope people won’t reply ‘I love Thai food’ as much.” 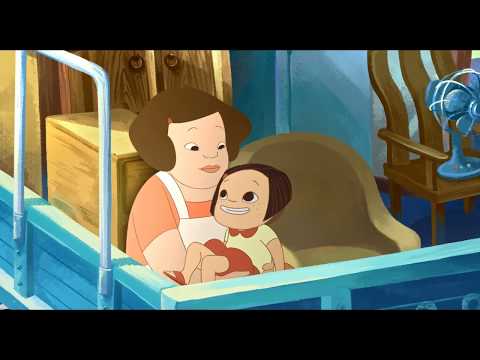