In "Father," documentarian Deng Wei views China's modernization through the eyes of his father and grandfather.

Father is a standout documentary, whose strengths primarily derive from the revealing moments it manages to capture on camera. This is due to the fact that director Deng Wei is filming his father and grandfather as the documentary’s subjects.

Deng’s grandfather is a blind man who has been working as a fortune teller since he was a teenager. Despite being born into poverty—his parents openly contemplated abandoning him to die as a child because of his blindness—he still managed to raise several children to adulthood, and build a home for himself.

Deng’s father, on the other hand, is decidedly a creature of the free market reforms that took place in China during the 1980s. He is a building contractor, whose construction projects loom over the neighborhood where he and his father live. However, he cuts corners on projects to save money, and is willing to engage in graft with the authorities. This later gets him in trouble, when a construction worker falls to his death on a work site.

Great personal tragedy has marked the lives of both generations of the Deng family. The Deng grandfather felt rejected from the world not only because of his blindness, but also because of his occupation as a fortune teller. This seems to inform the Deng father’s driven nature; he seems keen to claw his way to the top, to prevent the same personal tragedies that befell him and his siblings when they were younger. At one point in the film, he poignantly describes the childhood death of his younger sister from hunger to the camera, with the family even taking back her clothes after death so that others could wear it.

A difference in values is what leads to conflict between Deng’s grandfather and father. Deng’s grandfather believes that tragedy will eventually befall his son if he continues on his construction projects, and that he should have more modest ambitions.

Another point of conflict is that Deng’s father demolished the family home against the wishes of the grandfather. Namely, while grandfather Deng had painstakingly struggled to build the home even while blind, father Deng sees it as an eyesore—something that causes even their own relatives to look down upon them. For this reason, the father is willing to demolish the home despite that the grandfather is accustomed to living in it after having spent decades there, and would have difficulties moving around other spaces because of his lack of vision.

In many ways, Deng’s grandfather and father are emblematic of two eras of China–the Mao Zedong era and the Deng Xiaoping era that followed. One of the film’s many strengths is how its two subjects seem to embody the vast historical changes that China went through in the past decades.

The documentary strongly benefits from the fact that the filmmaker is the grandson and son of its subjects, allowing him to capture many revealing moments that an outsider would likely not have been able to. Deng’s father, for example, is quite unusually willing to openly discuss offering bribes or cutting corners on construction projects on camera. For his part, Deng Wei remains as a fly on the wall, with viewers not given any particular insight into his perspective. This occurs despite the fact that he himself can be seen as the logical outcome of his father and grandfather’s lives.

The film’s technical merits are also worth remarking on. A visual juxtaposition between the two men is established early on in the film. Many scenes have Deng’s father standing on a rooftop, glowering down at the world and declaring his ambitions, or speeding through the city in a car. By contrast, Deng’s grandfather usually moves slowly on the streets as he goes about his everyday routine, inhabiting a much more earthly plane of existence than his son.

If there are any shortcomings to what is indisputably a very strong documentary, it may be that the film does not really stick the ending. Namely, the film’s conclusion comes without any real sense of resolution or narrative arc. Yet such flaws are minor, as the documentary provides not only an important glimpse into the life of a family, but also insight into the struggles of two generations in China’s turbulent 20th century. 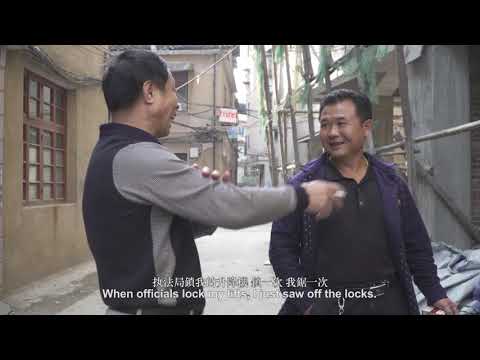 Father screens at the 2021 Asian American International Festival. More information about the festival is available here.