"Sniper: The White Raven" is the latest example in Ukraine's efforts to make "patriotic" films—but will it capture Western hearts and minds?

When Ukraine’s military outperformed expectations in the weeks following Russia’s invasion of their country, Western audiences’ interest in Ukrainian media surged. Numerous mainline publications published listicles of Ukrainian films, and Netflix even re-acquired licensing for Ukrainian President Volodymyr Zelensky‘s show Servant of the People. However, as a more focused Russian thrust grinds Ukrainian forces down in the Donbas region, it remains to be seen whether this enthusiasm will persist.

It’s against this context that Ukrainian government-funded war movie Sniper: The White Raven releases on American streaming platforms at the start of July 2022. With its story about a pacifist science teacher who turns into a deadly sniper, Sniper: The White Raven seems tailored to the Western zeitgeist, even if it was actually filmed before February 2022’s Russian invasion and likely targeted at domestic Ukrainian audiences. The film demonstrates competent technical skill, and sports a straightforward narrative—but will this be enough to gain traction among Western movie watchers?

From Pacifist to Sniper

Sniper: The White Raven‘s marketing materials make no secret that the film received support from Ukraine’s government and Ministry of Defense. It’s quite amusing, then, that the movie starts with a sex scene between our protagonist Mykola and his wife Nastya. Some bureaucrat apparently decided that full-frontal nudity was in the national interest, perhaps in flaunting a freer creative environment in Ukraine versus Russia.

Regardless, the scene serves a purpose in painting the idyllic existence that Mykola and Nastya maintain as environmentalist hippie types on the outskirts of Horlivka, a city in Donetsk oblast. It’s 2014, and the living’s easy—until it’s not. One day on his way to work as a physics teacher in the local school, Mykola spots Russian “little green men” on the road. Alarmed, he cycles back to his home, only to find Russian soldiers assaulting the pregnant Nastya. An altercation occurs, Nastya gets shot, and Mykola’s life forever changes. After bumping into some patrolling Ukrainian soldiers, he resolves to beat back the Russian invaders and join the military as a sniper codenamed “Raven,” his former pacifistic hippie self be damned.

Several dozen minutes of training footage later, Mykola has become an expert sniper, partially thanks to his physics math skills. He must put those skills to the test on the front line, especially as a top Russian sniper begins to pick off Ukrainian troops.

With Sniper: The White Raven, Ukraine’s Ministry of Defense apparently took a page out of the American military playbook by lending both material and active duty soldiers to the production. Besides Mykola’s rapid evolution from pacifist to killer, the movie certainly looks authentic, with up-to-date Ukrainian uniforms and realistic Dragunov SVD sniper rifles to boot. Competent cinematography and visual effects further bolster the film, whether its characters are shuffling through golden fields or slinking around ruined urban landscapes.

Since the 2014 Russian takeover of Crimea, the Ukrainian government has actually sponsored dozens of “patriotic” movies through DerzhKino, the Ukrainian State Film Agency. Sniper: The White Raven is just the latest example. Such films must meet language requirements (i.e. using Ukrainian or Tartar instead of Russian), and qualify for funding based on a point-based checklist of other “patriotic” elements.

None of these government sponsored “patriotic” movies have enjoyed much international attention though. 2017’s Cyborgs: Heroes Never Die probably came the closest, but its detailed depictions of the Second Battle of Donetsk Airport—while fascinating for those who follow the Donbas conflict in great detail—were probably too abstruse for most global audiences. Might Sniper: The White Raven succeed more than these other films, and also avoid the jingoistic stiltedness that often comes with “patriotic” propaganda?

Compared to government-backed films from other countries—say China’s The Battle of Lake Changjin displaying racistly overconfident Americans—Sniper: The White Raven puts more emphasis on humanizing its protagonists (Ukrainians) than on demonizing the (Russian) enemy. There’s even a nuanced moment where Mykola faces a former student on the other end of his barrel, hinting at the complexities of national identity in Eastern Ukraine.

Sniper: The White Raven‘s efforts at humanization don’t tread new narrative ground though. The film reliably follows a “one master sniper v. another master sniper” trope, and its initial character building for Mykola feels a bit perfunctory and even awkward (ex. the aforementioned sex scene). Its general arc of “formerly peaceful tough guy fights back when dastardly Russians kill his wife and unborn child” is also rather predictable in that the story can only end in certain ways if it’s meant to drum up Ukrainian patriotism and act as a metaphor for the country’s current predicament.

However, such predictability might actually match with the zeitgeist. As seen through phenomena like the “Ghost of Kyiv,” Western audiences have been immensely receptive to tales of dogged Ukrainian resistance, regardless of veracity or narrative innovation. In fact, the more the story fits with expected conventions, the better.

In this sense, Sniper: The White Raven‘s success among Western audiences will probably depend less on its cinematic originality, and more on the staying power of overall pro-Ukraine coverage in Western media. Furthermore, the better Ukrainian troops do against Russians, the more Sniper: The White Raven will complement a justified narrative around Ukrainian military competence, and feel less like propagandistic copium. It seems that, for Ukraine, victory on the battlefield will beget victory in the cinema—so Sniper: The White Raven should hope that Ukrainian forces can stem Russian movements in their country’s East and South. 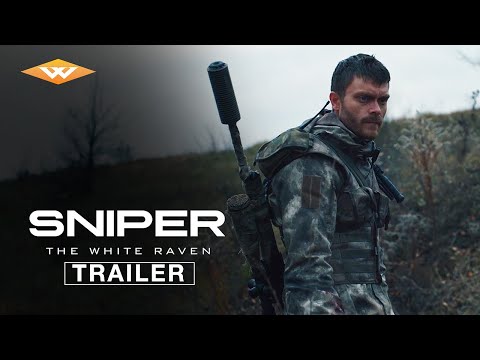 Review: Russian WWII Movie "The Pilot" Exalts the Survival and Redemption of an Aviator

Review: Russian WWII Movie "The Pilot" Exalts the Survival and Redemption of an Aviator