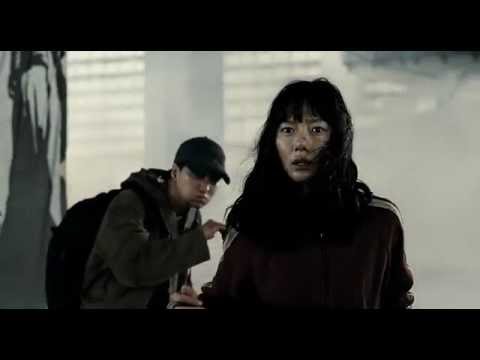 Monster blockbuster The Host remains one of South Korea’s most important films, even though it was released over a decade ago. Centered around a snack vendor named Park Gang-du who must (along with other dysfunctional family members) save his daughter Park Hyun-seo from a reptilian beast terrorizing Seoul, The Host wowed foreign critics and topped Korea’s box office in 2006.

However, The Host not just an entertaining monster movie. With multiple artfully constructed layers of social commentary, The Host offers an incisive look into South Korea’s soul. The film touches upon issues that, twelve years on, continue to plague South Korea’s national psyche—and that makes The Host something that anyone who cares about Korea should watch.

What struck me most when I first saw The Host years ago was its strong anti-American current. At the time, I wasn’t viscerally aware of how South Korea could have such negative feelings towards America; the film was eye-opening in that respect.

Reminiscent of how American nuclear tests helped create Japan’s Godzilla, American boorishness also created the monster in The Host. At the film’s beginning, an American military pathologist tells his Korean assistant to dump dangerous chemicals down the drain. When the assistant objects, saying the drain leads to the Han River (which runs through Seoul), the American scoffs: “the Han River is very broad…let’s try to be broad-minded about this.”

When the monster emerges several years later and begins gobbling up Seoulites, the Americans strut in once again. They concoct a lie about how the monster carriers a virus, using that lie to justify the deployment of “Agent Yellow”—a bioweapon whose name harkens to Agent Orange from the Vietnam War. American medical personnel patronizingly refuse to answer Korean reporters’ questions, and a Hannibal Lecter-esque doctor even orders a lobotomy on our protagonist Park Gang-du.

What does the Korean government do about their citizens being gassed with a chemical agent or lobotomized? Absolutely nothing. In The Host, the South Korean government seems like nothing more than an incompetent American lapdog—there’s one notable scene where a Korean official comically slips and falls as he tries to reassure the monster’s victims. It’s no wonder that North Korean leader Kim Jong-il praised The Host.

While most South Koreans certainly don’t chant “Death to America” when they wake up every morning, The Host’s anti-Americanism has real precedent. The film’s beginning scene is actually based on a real 2000 incident in which a US Forces Korea mortician ordered his staff to dump 120 liters of embalming fluid down the drain. While some argue the danger from this was overblown, it still resulted in a series of trials and widespread resentment against American military presence in South Korea.

Another topic of anti-American annoyance is the doctrine of “operational control”—which dictates that the US will command South Korean military forces if war ever breaks out with the North. Many in South Korea, including current President Moon Jae-in, think this doctrine undermines South Korea’s sovereignty and should come to an end. In The Host, the Americans have operational control—and Koreans get hurt or humiliated as a result.

Anti-American sentiments illuminate South Korea’s political divide. While conservatives feel more positive towards the US, many liberals resent America’s military presence. Liberals often see the US as an enabler for Korea’s past authoritarian governments, which brutally suppressed many liberal activists.

When The Host came out in 2006, one of these liberal activists—Roh Moo-hyun—was President of Korea. Leveraging incidents like the death of two schoolgirls struck by an American military vehicle, Roh made anti-Americanism a central piece of his 2002 presidential campaign. For much of his presidency, Roh butted heads with American officials; former US Defense Secretary Robert Gates even described Roh as “a little crazy.”

The fact that America was still embroiled in the internationally unpopular Iraq War around 2006 probably didn’t help either. When news footage about Agent Yellow plays in The Host, we’re treated to descriptions of the bioweapon juxtaposed against American troops in Iraq War-era desert camouflage. The false narrative about a virus? Perhaps a jab against America’s “Weapons of Mass Destruction” justification for invading Iraq.

As such, The Host offers an accessible view into the deep-seated anti-Americanism that exists along some parts of South Korea’s political spectrum. Though far less intense than it was in the early 2000s, anti-American sentiment still affects the country: just look at recent protests over THAAD, or the 2015 stabbing of US Ambassador Mark Lippert. If you care about Korea, it’s important to understand how opinions about America can vary across the political spectrum.

Beyond pure politics, The Host also offers a socio-economic critique. Though South Korea is now a highly prosperous country, prosperity doesn’t necessarily mean happiness or equality. The Host offers a poignant reminder of this reality.

After the monster snatches Park Hyun-seo and deposits her in a sewer, she meets a homeless boy named Se-joo, captured while stealing food from the Park family’s abandoned snack stall. Se-joo justifies his actions as “seo-ri,” a traditional practice where youngsters would steal food to appease hunger—perhaps paralleling how the monster must also “steal” humans to stave off starvation.

As his father mentions, Nam-il is the family’s only college graduate, who participated in Korea’s democratization movement during his university years. Yet, as Nam-il mutters, “I sacrificed my youth for the democratization of our country, but those fuckers won’t even give me a job.”

Later on, Nam-il visits a college friend nicknamed “Fat Guevara,” who works at a telecom company. Nam-il jokes how, given Fat Guevara protested so much during college, it’s a miracle that he got such a high-paying job. In fact, Fat Guevara is a sellout—who also wants to sell out Nam-il since the Korean government has put a fugitive bounty on the Park family. In an biting critique on capitalist greed, there’s an amusing scene when Fat Guevara mutters with some hidden colleagues about whether their reward for capturing Nam-il will be tax-free.

Monster of Han, from the Han

There’s a seemingly random scene five minutes into The Host. Amidst a torrential downpour, a forlorn businessman stands at the edge of Seoul’s Wonhyo Bridge, staring down at the Han River. “Underneath… in the water…there’s something dark in the water,” he mutters before jumping to his death.

While such bridge suicides are a common trope in Korean cinema in relation to economic disillusionment, I think this scene poetically illustrates how The Host embodies a broader, quintessentially Korean concept: han.

Notoriously difficult to translate into English, han is an amorphous sociological concept that denotes a uniquely Korean feeling of shared injustice, and the collective misery that stems from it. Han derives from Korea’s history of constant invasion and colonial oppression, and often results in highly public displays of angst (ex. 30% of the population protesting against Park Geun-hye corruption in 2017).

As Tablo hints at, han also happens to be a massively poetic triple homophone. Though they have different hanja (Chinese) roots, the sociological concept han (恨) has the same sound (한) as the “Han” in Han River (漢江) and Hanguk (韓國, the South Korean name for “Korea”).

With this in mind: when the man on the bridge looks down into the Han River, he stares into South Korea’s soul and sees a monster. In this sense, the monster in The Host is a metaphorical embodiment of han, a mysterious entity that wreaks collective suffering and injustice upon everyone it meets.

As dysfunctional as they are, there’s one thing that unites the Park family: han. Each of the family members experiences disempowerment and the sense of misery that results.

When trying to shoot the monster, patriarch Park Hee-bon draws a blank—his expression of helpless resignation as the monster pounces upon him is one of the most soul-crushing visuals in the film. Park Nam-joo suffers from indecision; though she’s an expert archer, she fails multiple times to stop the monster. Park Nam-il constantly feels guilt over his economic insecurity, soothing his nerves with soju. However, Park Gang-du experiences the greatest injustice of all, one that’s directly related to the monster: the loss of a child.

At the same time, han isn’t only bitterness. Some Koreans say how han also embodies a sense of hope, an ability to persist despite hardship. This too, is true for The Host. Despite everything—unauthorized lobotomies, sellout friends, American bioweapons—Park Gang-du and his family courageously soldier on.

As University of Maryland sociologist Jon Huer argues, “any foreigner who wishes to understand Korea must begin with understanding what this han is and what it means to the Korean heart. Without it, one’s understanding of Korea is wholly inadequate.” In The Host, just as the monster rises from the Han River, everything derives from han—whether it’s disdain for America, or economic disillusionment.

And that’s why anyone who cares about Korea should watch the film.