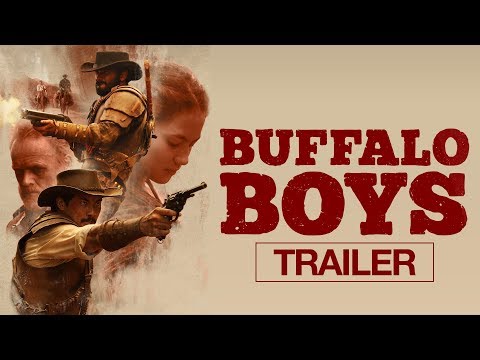 Cowboy hats, revolver duels, and unsavory saloons—no, this isn’t the American West. It’s colonial Indonesia as imagined in Buffalo Boys, a unique Western that just opened in US theaters. Produced by a Singaporean company and shot in Indonesia, the film deploys the Western genre to tell an action-packed story dramatizing the evils of Dutch colonialism in Indonesia. Along the way, Buffalo Boys conveys undertones of Asian empowerment that will likely resonate with Asian diaspora—especially after the success of Crazy Rich Asians.

In a shoutout to the Western genre’s origins, Buffalo Boys opens in the American West. Its two protagonists, a pair of brothers named Jamar (Ario Bayu) and Suwo (Yoshi Sudarso), have just finished working with their uncle on the US Transcontinental Railroad. While riding a train on their journey back to Indonesia, the pair fight against a band of white gangsters—foreshadowing what’s to come. Upon arriving in Indonesia, Jamar and Suwo get caught up in the struggles of a Javanese village against an evil Dutch administrator named Captain Van Trach. Together, the brothers must fight Van Trach and his henchmen to free native Indonesians from colonial oppression.

However, as someone who also generally enjoys action movies, I still found Buffalo Boys quite entertaining. For one, in an all-too-short sequence, the protagonists ride into town on buffalos (thus the title “Buffalo Boys”) in the same manner that cowboys mount horses—putting a delightful Southeast Asian twist on a North American trope.

Fit for the Times

This hints at the main appeal behind Buffalo Boys: it’s a Western fit for the zeitgeist. Though recent films from Hollywood (ex. Django Unchained) and elsewhere (ex. South Africa’s Five Fingers for Marseilles) have offered revisionist approaches, the Western genre often glorifies colonial conquest—for instance by contrasting “savage” Native Americans against “noble” white settlers. Buffalo Boys flips this narrative on its head. It’s refreshing to see a movie where the gunslinging heroes are Indonesian and the villain is a tall white guy, particularly when Hollywood often casts Southeast Asians as cannon fodder in some American’s military exploits (ex. Vietnam War movies).

While director Mike Wiluan agrees that’s a valid takeaway, he also notes that it’s more resonant for audiences outside Asia.

“The whole idea of subverting Western narrative tropes was immediately recognized outside Indonesia, but not in Indonesia. It was a wide discussion point [during early screenings] in North America. We got really external, emotive expressions—discussions about colonialism and stereotypes. But that hasn’t happened in [Southeast Asia].”

All this draws comparisons to Crazy Rich Asians. Like Buffalo Boys, Crazy Rich Asians conveyed messages of Asian empowerment (remember that opening scene where Eleanor Young buys out the racist British hotel?) in a genre (romance) that Hollywood often uses to malign Asians—but the film didn’t resonate in Asia.

Fittingly, Buffalo Boys director Mike Wiluan happens to be one of the producers of Crazy Rich Asians. Though Wiluan didn’t intend Buffalo Boys to have Crazy Rich Asians’ activist reputation, personal experiences as someone of Asian heritage living in the West did influence his creative process.

“It really extends from how I grew up. I’m of mixed parentage: my mother is English and my father is Chinese Indonesian. I was raised in Indonesia, but then went to school in England at age ten and didn’t come back for a long time—not until I realized I needed to come back and help with the family business after the 2008 Financial Crisis. This idea of ‘coming back home’ played out in both Crazy Rich Asians and Buffalo Boys.”

At the same time, this raises the question of what exactly “home” means for members of the Asian diaspora. Does “coming home” mean finding acceptance in a country like the US, or embracing your ancestral homeland? What does it mean when Crazy Rich Asians, which fought for Asian-American representation in Hollywood, also opened with a quote about how China is a sleeping giant who will who will move the world?

Mike Wiluan has his own stance on the issue.

“I think there’s a lot of [diaspora] Asians who want to ‘come home’ [to Asia] and get involved with what’s emerging because, in more developed countries, opportunities might now be more limited compared with Asia’s economic resurgence,” said Wiluan. “Lots of things are changing, especially in the film industry. There’s a new generation of filmmakers [in Asia], and digital platforms that allow their films to globalize like never before. It’s also happening [with actors]. I have Asian-American actor friends who are coming to Asia to find a voice, a home, and opportunity.”

Through its box office success, Crazy Rich Asians showed that the Asian diaspora hungers for films with strong Asian leads—and is helping Hollywood rethink who it casts for roles. However, Hollywood won’t change overnight, and films like Buffalo Boys raise a compelling prospect: if you can’t wait for Hollywood, why not just watch movies from Asia, which already star Asians in empowering roles? There’s a new film frontier ready for exploration—this time in the East, not the West.