Netflix’s “TWogether” Highlights the Legacy of English in Asia

Similar to other reality travel shows like The Amazing Race, TWogether sprinkles in these sightseeing trips with game show-esque challenges to earn clues to a next destination.  After visiting these attractions, Lee and Liu get to meet their superfan. However, the biggest challenge Lee and Liu face on their trip isn’t their budget or their many comedic challenge failures. Instead, it’s that the two don’t speak the same language.

While Lee is fluent in Korean and Liu is fluent in Mandarin, both have only taken a couple of classes in each other’s native language, and struggle to communicate. Out of necessity, they settle on talking to each other mainly in English, a language both are conversationally fluent in but unconfident with.

Their miscommunications and attempts to codeswitch between languages are played for laughs. Throughout the show, Lee and Liu intentionally mistranslate instructions to mislead each other for fun. Without a constant interpreter, English is also the main language the pair use to ask for help or chat with locals on their trip. This use of English as primary communication—despite not being the native language of Liu, Lee, or many of the locals they meet—is an interesting result of the history of English in Asia.

As a result of a history of colonialism, English is a lingua franca, or de facto language of communication between speakers of different languages, in many parts of the world. However, the way English rose to prominence in different countries is partially dependent on each country’s particular history of colonization. The Three Circles of English model maps the spreading of English in an Inner Circle (“traditional bases” of English), Outer Circle (colonized states), and Expanding Circle (non-colonized states).

For countries like the Philippines and Malaysia that were explicitly colonized by English-speaking imperial powers, the continuing relevance of English is often a holdover of the colonial era. Anglophone colonial projects instituted English as an official working language. But even after colonies became formally independent, English tended to stick around since it was already embedded in state institutions.

For countries—like the TWogether destinations of Indonesia, Thailand, and Nepal—that evaded direct Anglophone colonization and belong to the “Expanding Circle” of English, the institution of English as a relevant foreign language has much more to do with participation in a global economy or the role of a profitable tourism industry.

The prevalence of English Language Teaching (ELT) programs in Asia was “tied to perceived needs to respond to globalization.” In Indonesia, for example, prestigious schools with international standards (RSBIs and SBIs) prioritize English as the language of instruction to promote international participation. This reflects both a kind of linguistic neo-imperialism and a top-down government instituted “language-spread policy.”

In tandem, the incentives of a bustling tourism industry in countries like Thailand are an additional linguistic pressure. Because tourism is a major industry in Thailand, Thai authorities fear Thailand’s comparative unfamiliarity with English contributes to a tourist “misunderstanding and a negative attitude towards Thailand.” In Nepalese tourism centers, English is both a practical necessity and a way to translate friendly interactions with tourists into economic gain.

These incentives are not mutually exclusive, of course. In the formerly colonized Malaysia, the government reversed their earlier decision replacing English with Bahasa Malaysia as the language of instruction in 2002 out of “a fear that citizens were ill-equipped to become players in the global economy.” Likewise, in tourist-heavy Indonesia, low-English fluency brings a risk of “[lagging] behind in the competitive world of business, education, science and technology.”

Because English serves as a lingua franca in many parts of the world, the language also serves as a roadblock for international participation. For instance, the Association of Southeast Asian Nations (ASEAN), of which both Indonesia and Thailand are members, uses English as the working language. Many non-native English speakers in international-facing fields like politics or academia criticize this as an Anglophone “free ride.” When the expectation is the world will learn, speak, and write in English, Anglophone societies have a leg up in international communication and force former colonies to accommodate.

Within TWogether, the linguistic struggles of Lee, Liu, and their new friends reflect the role of English as a de facto lingua franca in Asia. As tourists in Indonesia, Thailand, and Nepal, Lee and Liu interact with the industries at the heart of this language history.

Translation and linguistic confusion are baked into the structure of TWogether. In one challenge at Prambanan in Yokyakarta, Indonesia, a Mandarin-speaking tour guide leads Lee and Liu through a history of Hindu deities. While Liu is overjoyed to at last completely understand someone, Lee is utterly lost.

“What did she say?” Lee asks in English.

Instinctively, Liu responds in Mandarin, “She said she’ll show us around today,” before realizing his mistake and switching to English, “I’m sorry, she said we follow her.” The show broadcasts Lee’s confusion by not subtitling Liu’s Mandarin response and animating the tour guide’s words literally flowing in one of Lee’s ears and out the other.

After the tour, the show’s director tells Lee and Liu that their clue challenge is to answer trivia questions by taking a picture of the correct statues while keeping seven tops spinning. Because only Lee understands the Korean instructions, he has to translate those instructions into English so Liu can recall the Mandarin-language information he learned earlier in the day.

“To be realistic,” Lee starts in Korean, “I have no idea what’s in there. I couldn’t understand anything. There’s a higher chance that he’ll know the answers better than I will.” He switches to a slower, hesitant English, “I’ll play the paeng-i [“top” in Korean]. You take the picture. Because you heard a little bit of information.”

These multiple levels of translation—from Korean to English to Mandarin—are only possible because of the stars’ greater experience with English. The success of Liu and Lee’s trip and their communication with their fans is reliant on English as a de facto lingua franca in Asia.

TWogether grapples with language and communication across national borders in Asia. As the show moves its South Korean and Taiwanese celebrities through Indonesia, Thailand, and Nepal, English remains the biggest tool Lee and Liu have to solve puzzles, follow directions, and find their fans.

Lee and Liu’s adventures through Southeast and South Asia are a light-hearted exploration of beautiful vistas and cultural landmarks from the perspective of a pair of lost tourists. It is comedic, heartwarming, and at times educational. However, what it also inadvertently teaches are the histories of European and American imperialism in Asia and the linguistic legacies they left behind. 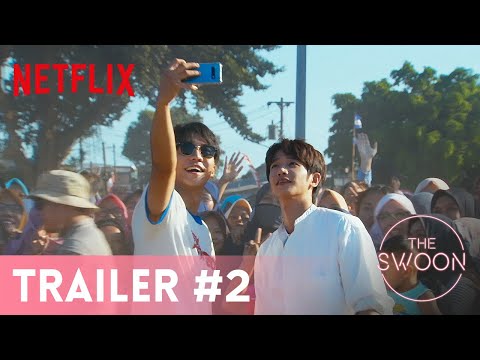 TWogether is currently available for streaming on Netflix worldwide.