"The Knight and the Princess" offers entertaining storytelling and a win for Arab representation in global animated cinema.

Arab representation within Hollywood is rife with stereotypes and, generally, Islamophobic with its portrayal of Arabs and Muslims. Sufficient representation is scarce—even less so in animation. Thus, it’s quite refreshing to see The Knight and the Princess—which is Egypt’s first animated feature ever, and has been 20 years in the making.

Proudly claiming an all-Arab cast and film crew, The Knight and the Princess is written and directed by Bashir El Dik, and co-directed by art director Ibrahim Mousa. Late Egyptian cartoonist Mustafa Hussein created the character designs and the Saudi-led Alsahar Animation created the production. The film moves beyond the stereotypes of popular Hollywood animations like Aladdin, and represents a triumph of good storytelling from the Arab world.

In his book, Reel Bad Arabs: How Hollywood Vilifies A People, Dr. Jack Shaheen addresses racial and ethnic stereotyping: “seen through Hollywood’s distorted lenses, Arabs look different and threatening.” Shaheen was one of the most outspoken and respected critics of the vilification and representation of Arabs in Hollywood cinema. After the release of Disney’s Aladdin in 1992, Shaheen stated in an essay that the film was slanderous, prejudicial, and denounces Arabs as “uncouth” people.

Released during the “Disney Renaissance” period, Aladdin initially recalls innocent childhood memories of a singing Robin Williams and magic carpet rides; however, a present-day viewing highlights the film’s negative Arab imagery. Its 2019 live-action remake also caused controversy over its casting choices, and was criticized for “whitewashing” the film. “The abhorrent Arab stereotype is as ubiquitous as Aladdin’s lamp,” states Shaheen, and he is not wrong.

Compared with Aladdin, The Knight and the Princess paints a startlingly different picture. The film takes inspiration from the seventh-century tale of Muhammad bin Qasim, a 15-year-old Arab commander from Basra in the Umayyad era. The Knight and the Princess follows a fictionalized Mohammed Bin Al Qasim (voiced by Medhat Saleh). In the film, he’s a young, idealistic adventurer who plans to rescue the wives and children of deceased sea merchants that have been taken prisoner by pirates and King Daher the Great of Sindh (Ghassan Matar). Before he leads the Arab army to defeat Daher and free Sindh, Mohammed saves Princess Lola Benny of Qossah (Donia Samir Ghanem) from a burning ship and they fall in love. However, the two must part ways if Mohammed is to defeat the tyrannical Daher and his army.

With a total of eight musical numbers and a stunning score by Haitham Al-Khamissi, The Knight and the Princess is a thrilling action-adventure. Its catchy, if not entirely memorable, songs will entice even non-Arabic speakers. Only one, sung by Lola Benny, seems out of place and unnecessary; however, the “long-distance lovers” song between Lola Benny and Mohammed is particularly moving.

Besides deploying a tried-and-true formula for musical animation, the film also contains sharply defined characters and stunning visuals that combine  into a powerfully told story. Its animated scenes are colorful, imaginative, and amusing. While its plot is perhaps more complex than that of a standard animated film, this makes the adventure all the more thrilling.

When The Knight and the Princess evokes Disney animations, it exceeds them. For example, two jinns, Bakhtou (Mohamed Henedy) and Shamhoresh (Maged El Kedwany), feel reminiscent of Pain and Panic from Disney’s Hercules (1997). However, they possess a humor that’s entirely their own. Both are kept prisoner by the Sorcerer (Abdel Rahman Abou Zahra)—similar to Pain and Panic with Hades—and their characters have the greatest arc. They are comedic highlights, and one scene when they’re hunting for a man called Mohammed is particularly funny. Shamhoresh asks how they will find this Mohammed man amongst the crowd, with Bakhtou exclaiming: “call out Mohamed, and they’ll all answer!”

Within its first two minutes, the film’s narration (by Lekaa El Khamisy) emphasizes the Arab merchants’ decency and their respect earned from traders on different shores. This is a stark contrast to the opening number of “Arabian Nights” in Aladdin, which contains the lyrics: “Where they cut off your ear, if they don’t like your face. It’s barbaric, but hey, it’s home.” Shaheen notes the opening number is defamatory to a culture and “slanders an entire people” with one song that sets the tone of the entire film.

Mohammed Bin Al Qasim is portrayed as a determined and kind hero with honor and, if there is one detriment to the film, it’s that Princess Lola Benny does nothing but sit around waiting for her Prince to return. However, her father presents her with various male suitors, all of whom she refuses without consequence from her family. Another notable scene that averts stereotypes is at a party where traditional male Arab dancers entertain guests; there isn’t a clichéd belly dancer in sight.

A Victory for Representation and Arab Storytelling

Usually, audiences’ first interaction with cinema is through animation. This makes The Knight and the Princess feel even more like a double victory for representation and championing Arab storytelling. Filmmakers and animators are in a unique position to reach young viewers and impact their childhoods, and should be conscious of what images they paint of Arab people. Upon Aladdin’s release, the film was heavily criticized for the Anglicized features of Aladdin and Jasmine, and the greedy and grotesque-looking merchants. Even its recent remake has failed to escape controversy.

Put in contrast with Aladdin, The Knight and the Princess proves that Arab stories are better told with Arab filmmakers at the helm. The film’s animation is gorgeous and contains vivid character design;  catchy musical numbers and a classic love story make it even more entertaining. There isn’t much the film lacks, and its thrilling plot delivers laughs and excitement. The Knight and the Princess is a delight for the entire family. 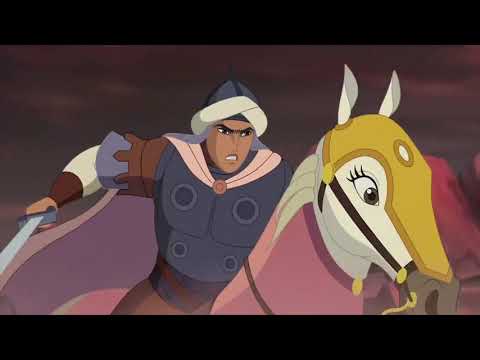 The Knight and the Princess screened at the 2020 Annecy International Animation Film Festival.