"Book-Paper-Scissors" offers a contemplative and philosophical view on maintaining traditional Japanese art in a modern society.

Although the common idiom states “don’t judge a book by its cover,” Japanese documentary Book-Paper-Scissors argues that a book’s cover design is vital to advertising the essence of its contents. The film follows 75-year old Nobuyoshi Kikuchi, a Japanese book designer who has created over 15,000 book designs. It showcases Kikuchi’s process and artistic philosophy, and forces audiences to contemplate how those practices fit in the modern world.

This contemplative and philosophical examination comes amidst a shift towards digital reading—which is shrinking the publishing industry, and challenging book designers to innovate while staying true to their craft. Such challenges of balancing innovation and tradition aren’t exclusive to the book industry. On a broader level, Book-Paper-Scissors reflects a struggle that afflicts traditional Japanese artisans across many fields.

Japanese culture has a reputation for applying careful time and attention to practical and artistic details. There are double handrails for people of different heights in public buildings, and devoted artisans or shokunin may spend their entire lives perfecting a single art to pass to the next generation. One example of a shokunin is Jiro Ono, the 94-year-old sushi chef and protagonist of the popular documentary Jiro Dreams of Sushi.

Many Japanese artisans believe that this work philosophy—which also prizes making improvements with limited resources—has roots in the Sakoku period. During this long period of self-imposed isolation from the mid-1600s to the mid-1800s, Japan’s authorities severely restricted trade and access to materials and technology.

Kikuchi’s work reflects this philosophy. Within limitations like release deadlines, barcodes, and ISBNs, he creates eye-catching or unconventional designs. Through interviews with different publishers, the documentary provides candid opinions about how the publishing industry receives Kikuchi’s designs. One publisher describes a design that purposely slanted to the left and made the book title off-center from the spine. Having never encountered a design like this before, the printing company panicked because they thought they had printed the book wrong. In the end, there were no complaints because the design still met all industry standards.

Balance Between Modernity and Tradition

The number of Japanese master artisans has dwindled as fewer consumers buy their products. In 2016, craft sales declined from 540 billion yen in 1983 to 96 billion yen in 2016. Academics speculate that the decrease is due to generational differences. Younger Japanese prefer jobs with higher income and better mobility, and thus choose universities and degrees over trade schools and apprenticeships.

Book-Paper-Scissors depicts these realities, but offers nuance—and hope for the future. The film contrasts Kikuchi with his apprentice Isao Mitobe, who belongs to a younger generation of book designers. Along the way, it also highlights how younger artisans like Mitobe use modern methods to keep their craft alive. For example, Kikuchi still plans book covers by printing designs onto paper, and rearrange them using tape and glue. Kikuchi’s assistant then digitally renders his physical drafts for publishers. Mitobe, on the other hand, designs and drafts everything digitally. While comparing Mitobe’s modern minimalist designs with Kikuchi’s complicated traditional designs, the documentary implicitly praises Mitobe for modernizing his process and giving Kikuchi leeway. Some publisher interviewees even remark that Kikuchi began to use modern fonts because of Mitobe’s influence.

Another stark reality among Japanese artisans is a lack of diversity. The shokunin culture is usually male dominated, with fathers passing down knowledge to sons. Unscientific patriarchal attitudes also abound. For example, traditional Japanese sushi chefs don’t take female sushi chefs seriously, claiming that a woman’s hands are too warm to handle fish, or that a woman’s menstrual cycle causes imbalance to their taste. Book-Paper-Scissors reflects these realities as well, though perhaps not to sexist extremes. Most of the designers, writers, and apprentices in the documentary are male, while their assistants are women.

As they strive to stay relevant, many artisans have embarked on diverse efforts to revive Japanese traditional industries. Some artisans use partnerships with global brands to promote Japanese craft. For example, in 2007, Louis Vuitton partnered with Wajima Kirimoto, a long-established brand of wajima lacquerware.

Other artisans, like Kikuchi, create a supportive and inclusive environment for more modern attitudes. Apprentice Mitobe looks to Kikuchi for advice, but ultimately has autonomy to create designs for a universal clientele that differs from Kikuchi’s clientele. Other open-minded artisans help nontraditional groups— like young people starting their second career, or housewives—to learn about their craft.

Fittingly, Book-Paper-Scissors’ director Nanako Hirose is an apprentice herself, who made the documentary to respect older artisans who have paved the way for a new generation. Through Book-Paper-Scissors, Hirose commemorates traditional Japanese art while advocating—and presenting a compelling roadmap—for its survival. In a contemplative and philosophical manner, the documentary shows that modern trends and processes aren’t incompatible with traditional art, and that Japanese culture cannot exist in isolation from the broader world. By illustrating these realities, Book-Paper-Scissors challenges the younger generation to bring Japanese craftsmanship into a new era. 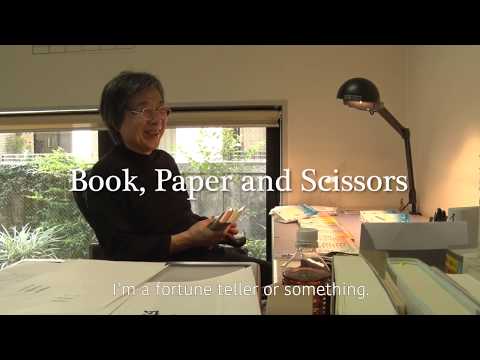 Book-Paper-Scissors is screening at Japan Cuts 2020, which runs virtually for US audiences between July 17, 2020 and July 30, 2020. Purchase tickets at the Japan Cuts website.