Taiwanese romantic comedy “IWeirDo” uses a unique aspect ratio and aesthetic to underscore the painful evolution of a budding relationship.

The film follows Chen Po-Ching, a young translator who suffers from Obsessive-Compulsive Disorder (OCD). Due to his OCD, Chen Po-Ching experiences intense anxiety if he fails to follow specific behavioral rituals, such as a strict daily routine. During a scheduled trip out of his apartment, Chen Po-ching meets someone with similar symptoms—a studio art model named Chen Ching. Their relationship blossoms based on shared experiences with OCD, radically changing both of their normal routines for the better.

However, Chen Po-Ching’s OCD symptoms suddenly stop one day—mismatching the two’s lives and straining their young relationship. IWeirDo shifts its visual and auditory style to mark this change. By using different color palettes, musical scores, and even aspect ratios, IWeirDo deftly transitions from an upbeat, quirky romcom to a somber relationship drama.

IWeirDo spends the first half of its runtime using a vertical aspect ratio reminiscent of static social media posts. The cinematography in this section feels painfully evocative of the order that Chen Po-Ching requires to alleviate his anxiety. Like a perfectly curated Instagram post, each frame is precisely arranged to either create symmetry in an otherwise chaotic setting (a subway car, for instance) or to create a sense of visual order and organization.

This Instagram-esque aesthetic has a stark and vivid palette that color-blocks (i.e. juxtaposes to create dramatic visual contrast) bright primary colors to different areas of the frame. The characters’ solid-colored clothing pops off the equally solid-colored walls of their living spaces. Even Chen Ching’s hair reflects this color-blocked order, with clear dividing lines between her black roots, her green hair, and her blue tips. These frames are aesthetically stunning, with the careful framing of a perfect corner between purple and pink walls mirroring the rigid cleanliness of IWeirDo’s characters.

This first half of IWeirDo centers on Chen Po-Ching’s OCD symptoms and his need to keep a strict routine and a tightly controlled environment. He spends much of his day cleaning, and only leaves his apartment on the 15th of each month to run errands. Despite his latent anxiety, the tone of this section is light-hearted and whimsical. However much Chen Po-Ching acknowledges his OCD prevents him from living a “normal” life, the perfectly manicured order provides him a sense of stability.

The film’s music, too, mirrors this strong aesthetic choice. With its strange instruments and quirky percussion, IWeirDo’s score has an otherworldly sound that accentuates its protagonists’ mental and emotional states. When Chen Po-Ching’s routine veers off-track, the score becomes subtly discordant, which adds an underlying anxiety to what might otherwise appear as a normal shopping trip. Even in the film’s brightest moments, the music, while enjoyable, is prominent enough to feel intrusive—hinting at how Chen Po-Ching’s routines ultimately burden him even if they give him comfort.

The start of Chen Po-Ching’s relationship with Chen Ching takes this aesthetic style even further. With an additional character in each frame, the shots are more colorful and the tone even more otherworldly. Chen Ching appears to be a perfect romantic fit for Chen Po-Ching. She both shares his anxieties yet challenges him to be more resilient. Likewise, the cinematography of their blissful relationship highlights the ways their lives appear to fit perfectly together. At the height of their happiness, the cinematography presents their intimacy as perfectly ordered—the bright red of Chen Ching’s sweatshirt nestled on Chen Po-Ching’s light blue that in turn rests on a solid yellow pillowcase. The strict divide between primary colors is visually appealing yet also evocative of the simplicity of children’s media. It is all at once distinctly abnormal yet strangely soothing.

Around the midpoint of the film, however, Chen Po-Ching suddenly discovers that his OCD symptoms have subsided. In turn, the cinematography and score shift to reflect his new perspective. As he opens the door to go outside—a world he once saw as too dirty to enter without protection—the vertical frame of the first half extends to a more conventional cinematic aspect ratio. From this point on, smoother camera tracking and swift pans replace the meticulously arranged static shots. This shift from perfectly arranged stillness to fluid disorder captures the new emotional themes of Chen Po-Ching and Chen Ching’s fundamental incompatibility.

When Chen Ching first learns Chen Po-Ching no longer relates to her experiences of OCD, she frantically disrupts the order of their apartment by tilting picture frames and spilling jars to see if it will trigger his anxiety. Unlike the still shots characteristic of the first half of the film, these experiments use fast camera pans that anxiously follow Chen Ching throughout the apartment. The perfect order of their relationship no longer exists and the new filmmaking aesthetic accentuates this.

Chen Ching feels a sense of loss at this sudden turn to normalcy and likewise the film’s now more conventional aesthetic feels sterile. The film abandons its bright, vivid color-blocking for a more subdued palette that evokes a feeling of mundanity. It is simultaneously a more recognizable cinematic aesthetic, yet lacking the striking visual comfort of the first half’s rigid style. Chen Po-Ching no longer feels like a perfect fit in Chen Ching’s life and they grow increasingly distant not only emotionally but in the film’s framing. Where the film once fit both protagonists in a narrow frame, it now leaves them alone in their own wide-shots, connected only by the shot-reverse shots of conventional cinematic language.

With this aesthetic and emotional change comes a more somber and conventional score. The film trades its plucky and attention-grabbing style for a subtler and more atmospheric feel to match the disappearance of Chen Po-Ching’s OCD symptoms. In a pivotal moment, Chen Po-Ching decides to try touching a subway handle, and the score’s loud rhythmic melody becomes louder and more percussive to mirror his growing anxiety. But upon grabbing it, the intrusive percussive notes dissolve into the long, fluid notes of string instruments. Just like the cinematography, the music swaps out order and rhythm for movement and fluidity. The painful normalcy of Chen Ching and Chen Po-Ching’s new relationship dynamic mirrors the shift in IWeirDo’s cinematic aesthetic, which helps its audience sympathize with the nostalgia for a time when their relationship was neatly ordered and framed.

IWeirDo’s tonal shift from quirky romantic comedy to more conventional romantic drama makes creative use of aspect ratio, color, and film score to underscore its underlying themes of relationship fragility. As the film transitions from genre to genre, it swaps out its aesthetic style, emotional underpinning, and even primary protagonist in a shift that is striking and effective. Beyond making you empathize with its characters, IWeirDo’s stylistic choices invite audiences to experience what Chen Po-Ching and Chen Ching feel in the comforting highs and crashing lows of their newfound relationship. 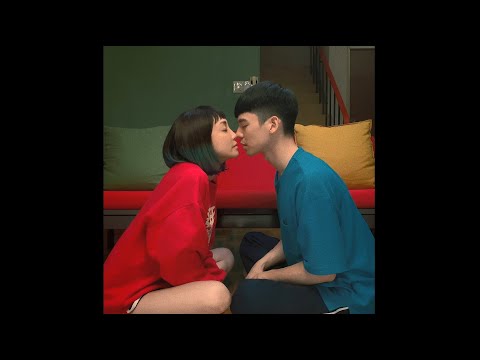