Review: ‘Rom’ – A Movie With 8 Years In the Making

In a first for Vietnamese cinema, director Tran Thanh Huy’s 2019 film Rom won the New Current Award at the 24th Busan International Film Festival. Centering on a group of characters who live in an apartment block on the verge of redevelopment, the movie offers an authentic and gritty perspective of working class life in Ho Chi Minh City. What’s even more remarkable is how director Huy spent eight years making the film—pouring his heart and soul into a work that’ll hopefully set a new standard for Vietnamese filmmaking.

The movie’s title comes from its main character, a 14 year old boy named Rom—who was abandoned by his parents on a street corner while their apartment was being demolished. One day, Rom helps a woman pick a correct lottery number and amass a small fortune. In return, the lady lets him stay in a small corner of the apartment complex she lives in.

Surviving on his own wits, Rom manages to make a living by helping the people in that apartment complex place bets; if he guesses correctly, he earns a commission from any wins. The movie’s soul comes from four supporting characters that Rom helps. All four share multiple traits: besides living in the same complex, they all have a gambling addiction and are willing to be their entire livelihoods towards one random lucky number every day.

Through these supporting characters and Rom, the film is able to explore many different facets of poverty. During Rom, we learn that all those supporting characters have various motivations—often heartbreaking—to take up gambling. There’s an old lady who wants to regain her life as a well-respect teacher; a widower who lost his wife and child in a car accident and continues seeing them as ghosts; a painter who wants to help his wife open a tailor shop; and a mother who wants to pay for her child’s cancer treatment. Rom himself has a tragic motivation as well: he wants to see his parents again. All these characters’ fates become intricately interwoven through not only the lottery, but also constant threats from high-interest debt collectors.

Besides containing empathy-invoking characters, Rom also uses visuals to paint a stirring picture of working class life in Ho Chi Minh City. All of the film’s scenes are shot in the city itself, and usually leverage natural weather conditions and lighting. While this was the byproduct of a low budget, it helps the movie feel genuine to its setting.

Furthermore, shooting in natural conditions across Ho Chi Minh City necessitated a high degree of skill. The movie required different kinds of cameras, whose footage then required synchronization into a consistent color theme.

Rom also innovates by not only shooting characters up close, but also doing so with a tilted angle. In fact, the Busan International Film Festival initially rejected the movie because the festival organizers did not know this tilt was intentional.

By slanting the frames, Rom perfectly captures the life of Ho Chi Minh City’s working class—where nothing is stable or smooth, and there’s fierce competition to survive by treating others as enemies. However, Rom also shows that there are still people willing to lend a helping hand in this urban jungle, as seen through one powerful scene where the camera angle is straight.

Director Huy himself deserves praise for creating this unique movie, and representing righteousness, courage, and passion in his filmmaking.

As Huy told Cinema Escapist in an interview, Rom took eight years to make. It had no corporate sponsorships, fancy costumes, beautiful sets, or famous stars. Instead, all of its crew were first time filmmakers; Huy decided to make this feature after winning multiple short film awards after graduating college at age 22.

While at that age Huy could’ve made a movie purely for financial purposes, he decided not to. Instead, he drew inspiration from his own life as a lottery delivery boy who lived in an apartment complex that awaited demolition for a decade. Even when a group of Vietnam’s most well-established directors asked Huy out for coffee to talk him out of making Rom, he stuck to his conviction of telling the story of people at the bottom pit of society.

With Rom, Huy’s message to those struggling at society’s margins is clear: never give up hope, and always run toward a better future. It’s a fitting message, because Rom itself sets a new precedent for future Vietnamese filmmakers. Now, as Huy said to Cinema Escapist, “it’s possible to make a movie for the sake of art and genuine storytelling.” 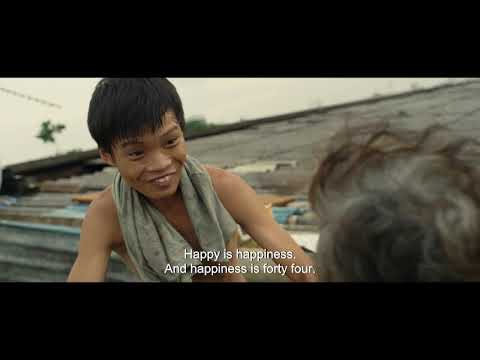