Filipina filmmaker Antoinette Jadaone’s “Fan Girl” follows the life of a fangirl finally living her most treasured fantasy—meeting her idol—only for reality to come knocking at the door.

Best known for being the force behind blockbuster hits like That Thing Called Tadhana, Alone/Together, and Never Not Love You, Philippine filmmaker Antoinette Jadaone is back with Fan Girl, the lone Filipino film at 2020’s Tokyo International Film Festival.

While previously Jadaone worked with some of the Philippine’s biggest loveteams, for Fan Girl she takes a step back and casts newcomer Charlie Dizon in her debut leading role. As the film’s title suggests, Fan Girl follows the story of a 16-year-old fangirl (Dizon) who is madly in love with actor Paulo Avelino (played by Avelino himself). Following a mall show promoting his latest movie, the fangirl, in hopes of getting closer to her idol, hides at the back of his pick-up truck to follow him home.

Coming face to face with him, she quickly learns that he’s not the same man she envisioned in her fantasy. She discovers all his dirty deeds, from excess profanity, to drinking, drug abuse, and smoking abound. What unfolds is a coming-of-age tale of the titular fangirl as she discovers the reality of the adage “don’t meet your heroes.”

Five to six years in the making, Fan Girl is a refreshing turn in Jadaone’s career. Her decision to put newcomer Dizon as the lead is the film’s pivotal draw; Dizon’s portrayal of the protagonist begins as an airheaded girl. As the film progresses, Dizon’s fangirl reveals that she has a story of her own. Her encounter with her idol is a reminder of what it means to a fan, and what it means to idolize someone.

Jadaone’s take on fandom forces us to think about the complexities of fandom culture, as well as our roles and boundaries as fans. While Fan Girl is set in the Philippines, the story is universal—it speaks to many different kinds of fans, whether those of celebrities, singers, artists, filmmakers, athletes, or political figures. Jadaone’s film also gives voice to a group that is often sidelined as crazy, rabid, hysterical young girls with no mind of their own—when in fact, they are also the new force of social justice—whether it’s through fancams, donations, or mobilizing movements.

Dropping the flashy visuals and dramatic cues seen in many rom-coms, Fan Girl reveals the ugliness and the beauty of being a fangirl without embellishment. In this interview with Cinema Escapist, Jadaone talks about her creative decisions, her majority-female crew, and the political climate her film draws inspiration from.

What is your inspiration for the film? I know you mentioned during the TIFF Talk Salon that you got the idea after working with different stars, but how did the part about a fan meeting her idol come about?

It’s a culmination of everything that I’ve gone through as a filmmaker dealing with celebrities and their fans. Even when I was working as a production assistant, I would see different kinds of fans. There are rabid fans, but there are those who are polite and shy.

When you work behind the scenes, you get to be close with celebrities and you see that they really live dual lives whether it’s intentional or not. More often than not, they’re really more private and they really want to hide their true feelings unless you’re someone really close to them. So for the idea about a fangirl meeting her idol, I just wanted to show a fan living the fantasy she always wanted but it’s not the fantasy that she expected.

Your film came with a warning “Never Meet Your Hero”, do you personally believe this?

I think we should advocate this to fans, especially if you’re the type of fan that puts your idol on a pedestal—it’s not just idolizing, but to the point of worshiping. That kind of fan, a fanatic is very dangerous. Your idol shouldn’t be seen as a higher being because they’re also just human. And if you treat them as gods, when you meet them, you’ll be disappointed to know that they’re not so different from us who aren’t celebrities.

In showing a fangirl, what kind of research did you do to ensure that you got that portrayal right?

It’s not research but more on observations. I started writing the script in 2016, but the concept was already in my head in 2015. During that time, I was working with a lot of popular actors, and through observations you’ll see different kinds of adjurations from the fans. I looked at the way the actors deal with their fans, watched videos of celebrities doing mall shows, and interviewed younger fans.

I showed the script to “super fans” for them to comment on the kind of fangirl the film was going for. But because we’re all fans of something, I also tapped into my inner fangirl; the only difference is that I don’t happen to be a super fanatic like our Fan Girl. It was easy because I work in the entertainment industry, so there are always going to be fans around me whether it’s a crew, staff, or a co-actor.

There’s a lot of profanity in the film, alongside sex, drugs, and smoking. Why did you make the decision to put references to these in the film?

Working with celebrities as a director, some instances like getting their hair cut is difficult because they might have shampoo endorsements. So if the script calls for profanity, it’s not that simple; you have to seek permission and approval.

Imagine how much more difficult it’d be for sex, drinking, or smoking scenes. Of course in real life, these celebrities may do this, and as a director/writer I have to reflect their reality. Otherwise, the film won’t be truthful. I want the idol’s reality to be really different from the fangirl’s fantasy of him.

How difficult was it for Avelino to say yes to portraying his own life, albeit fictionalized to a certain degree, for the film?

It wasn’t difficult. I made him read the script and after a few days, he said yes. The only question he asked was “Who’s the fangirl?” But everything on the script, he didn’t question.

I was really lucky to find an actor that’s brave and understanding of what was needed to make the film. I feel that if he didn’t give it his best for the role, putting his image and name on the line, it would ruin the film. I needed to find the actor first and foremost, and when I found Avelino, I was set on him because finding an actor that’s willing to give himself up to play a different version of him—whether it’s the real him or not—takes courage.

The film dabbles a lot in disillusionment, fantasy, and the coming-of-age journey of the fangirl. Why is this an important story to tell?

When I started writing the script in 2015, it wasn’t the script it is now. It was more of a love story, a romance where the fangirl gets into this fantasy with her idol and it comes true. I was ready to shoot in 2016 but some things didn’t work out, although I now see it as a blessing in disguise. During those three years, I was able to revise the script. I became more mature and had more wisdom. 2016 was also when we changed Presidents in the Philippines.

This is a pivotal moment for the script because my view of fantasy and idol/fan culture in the Philippines changed. Originally the film was only supposed to be a simple critique of the entertainment industry, but because of the political climate we had, I realized that it’s not only celebrities that we idolize, but also politicians.

We’ve become such fanatics of government leaders. That pushed me in a different direction. Our fangirl [in the film] might be a fan of a celebrity but she also represents a certain type of fan in the Philippines.

The fangirl remains nameless in the majority of the film and Charlie Dizon as the titular fangirl was kept in wraps for a long time; what was your intention in doing this?

The fangirl is anonymous in the film because I wanted her to be just like any fangirl—this is not just her story, or this of particular fangirl, but the story of all fangirls. She represents us.

By concealing the name, you relate to her more because you don’t know her name, but you feel for her and empathize with her.

We kept Dizon’s participating as the lead under wraps because in the Philippines celebrities make the film, especially A-listers. People see the actors first before the film. They watch because of celebrities involved instead of the film’s plot or story. We wanted to hide it so as not to make the film about the celebrity, but more about her portrayal of the fangirl character.

Throughout the film, the fangirl reiterates that she’s not a kid anymore. Is this insistence because she wanted to be seen as a woman by Avelino, or is it because she really believes that she’s all grown up?

What kids don’t realize is that just because you’re an adult, it doesn’t mean you know everything, and you can get what you want, or that you won’t get hurt or you can be happy.

When you finally become an adult, you’d wish to become young again—that’s what I wanted to show through Fan Girl.

In making the decision to have a female crew, how would you comment on the Filipino entertainment industry’s treatment of women?

I’d say we’re doing a lot better compared to Hollywood. This is because the decision-makers in the industry are also women.

If you want to be a director, and you’re a woman, it doesn’t matter as long as you have a story. If you’re passionate and you really push for what you want—regardless of gender or sexual identity—the industry will accept you. It’s important that women are leading because it sends a message that you don’t need to be a man to be a decision-maker.

What message can we take away from the film?

There is nothing wrong with being fans of a celebrity, but what’s wrong is when we become blind followers.

Think about what happens when we put these idols on a pedestal.

When we worship them, we think they can’t make mistakes. This is especially true when we idolize government leaders, instead of their governance, so when they get in trouble or make mistakes, we easily forgive them because we like them regardless of what they did. Instead of idolizing people, we should idolize values and track records, so when these people make a mess, we have the agency and power to call them out.

There are many types of fans. What kind of fan were you trying or hoping to portray?

Fangirls can get really caught up in a world of fantasy.

At the end of the day, if there’s two of you on a boat that’s about to sink, and there’s only one life vest, would he or she give it to you? You wouldn’t know. We think of these celebrities so highly that we forget to think of ourselves sometimes.

Interview was conducted over Zoom and was edited for clarity.

Fan Girl premiered at the Tokyo International Film Festival 2020 and is currently screening at the Tallinn Black Nights Film Festival until November 28, 2020. It is also an official entry to the upcoming Metro Manila FIlm Festival from December 25, 2020–January 7, 2021. 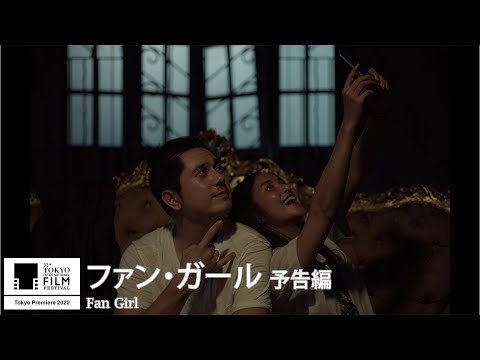