Though a lack of narrative structure may make the series feel insubstantial, "Papa and Daddy" offers an enjoyable invitation into the lives of a lovable cast of characters.

Papa and Daddy is a slice-of-life mini-series chronicling the lives of fathers Damian and Jerry, as they raise their son Kai in a period of great transition. When the couple decides to enroll Kai into kindergarten, they are forced to grapple with the heteronormative expectations of the other schoolparents and Jerry’s parents, who do not know he is gay or a parent. But while this premise may seem conflict-driven and highly narratively structured, in practice Papa and Daddy is as carefree and loose as its child deuteragonist.

In contrast to a sitcom where conflicts may be resolved within their own self-contained episodes, or a soap opera with multi-season-long character arcs, each episode of Papa and Daddy feels more like a thematic vlog in a YouTube series. One episode will center on an extended flashback of the origins of Damian and Jerry’s relationship in a way that largely ignores the previous episode’s cliffhanger, and the next might focus on the family’s experiences at a Pride Parade.

Because of this loose narrative structure, some episodes may not introduce a source of conflict until their final act, while others wrap up large series-long problems in a short scene. It is occasionally jarring to see what appears to be a huge upcoming character arc quickly resolved with no lasting consequences, or virtually the same cliffhanger used to end two consecutive episodes. But there is a certain charm in how the show manages to use its loose structure to cover so much ground with such a degree of intimacy in Damian and Jerry’s relationship.

While the lack of typical structure can occasionally make the series fall short of its narrative potential, there are some tonal benefits to the more whimsical storytelling structure Papa and Daddy uses. Combined with solid acting talent across the board–especially from Kai’s child actor and a strong supporting cast–stepping into the world of Damian and Jerry’s family and friends feels like an invitation into the warm mundanity of someone else’s life.

In a relatively short time, the show engenders genuine affection and empathy for many of its characters because the waxing and waning importance of an episodic plot allows audiences to to see these characters outside of the typical constraints of a conflict-driven narrative. The protagonists’ friend Mike, as well as Damian’s sister Celine–who is the focus of the series’s best episode–are stand-out characters that shine in both the show’s more dramatic moments and light-hearted scenes. Here, we can see Papa and Daddy at its finest: a venue to acquaint its audience with a warm and lovable cast. The show excels at making you fall in love with its characters and care about Kai’s upbringing, and it does so through its microstory slice-of-life aesthetic.

While Papa and Daddy struggles with having a strong narrative theme or paying off the character arcs it sets up, the moments the show is successful at drawing you into its world are legitimately heartwarming. Like the vlog webisodes it appears to be inspired by, Papa and Daddy feels like catching up with old friends—as if you’re heading to a cafe with Damian, Jerry, Kai, and others to trade happy stories and take refuge from the rest of life. 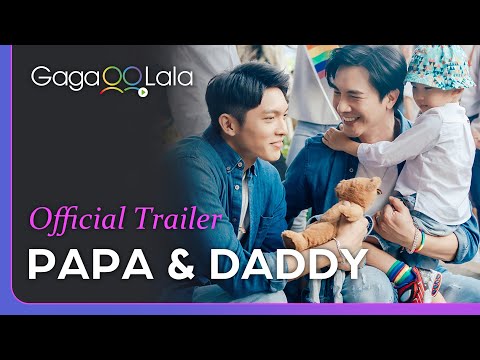