In May 2019, Taiwan became the first country in Asia to legalize same-sex marriage. Since then, Taiwan has leveraged this to brand the island as a bastion of progressivism in Asia. For example, while COVID-19 has shuttered LGBTQ+ Pride events around the world, Taiwan hosted the largest post-pandemic in-person Pride event thisin October. In response, prominent politicians like Taiwan Premier Su Tseng-chang made explicit connections between the event’s celebration of Taiwanese LGBTQ+ activism and the image of a strong, modern, democratic Taiwan. Here, winning same-sex marriage is the foundation for a liberal Taiwanese future.

The first story features Jovi and Mindy, an activist couple fighting for the legal recognition of Mindy as a mother to Jovi’s biological daughter. Because the law doesn’t recognize their relationship, Jovi worries that their daughter will not have the types of legal protections afforded to the children of straight couples. Second, senior couple Hsiang Ho and Tien-Ming Wang grapple with fears of declining health and inheritance. With Ho suffering from a worsening case of dementia and Wang recently surviving a minor stroke, Wang fears that his partner will be left with little to no support system if Wang passes before Ho. Finally, for young couple Gu and Shinchi, citizenship and immigration status frame the most pressing legal concern exacerbated by anti-LGBTQ+ laws. Without a legally recognized relationship, Gu might be forced to leave Taiwan for his native Macau.

By juxtaposing these three stories that focus on the different material impacts of anti-LGBTQ+ legislation, Taiwan Equals Love smartly grounds Taiwan’s same-sex marriage debate in the far-reaching consequences of second-class citizenship. Rather than simply following the clearest narrative framing of the same-sex marriage debate—that an absence of marriage equality is a symbolic disavowel of Taiwan’s LGBTQ+ population and a delegitimization of LGBTQ+ love—Yen prioritizes the less visible legal repercussions marriage inequality causes in adoption, medical, and citizenship rights. This deftly alludes to the broader scope of issues that LGBTQ+ Taiwanese face.

[Read: Director Zero Chou on the Challenges of Making LGBTQ Movies in the Sinosphere]

However, Taiwan Equals Love’s narrative frame limits the effectiveness of its three contrasting stories. While the documentary partially subverts a marriage-centric lens by drawing attention to the ways it is connected to other legal and political issues, it ultimately implies marriage is a panacea to these problems.

In an effort to provide a hopeful and narratively satisfying ending, for example, Taiwan Equals Love ends directly after the legalization of same-sex marriage in Taiwan. This frames the passage of the 2019 bill as a culminating point of LGBTQ+ activism in Taiwan. While the film’s final shots of the couples’ marriage ceremonies or applications provide a tight narrative ending to each arc, finishing directly after the legalization of same-sex marriage leaves the film’s prior allusions to the future of Taiwan’s LGBTQ+ activist movement promising, but incomplete.

These are arenas that, even after marriage, have not yet been fully resolved. Currently, same-sex adoption in Taiwan is limited solely to children who are biologically related to one parent, such as Jovi’s daughter. Similarly, same-sex marriages with non-citizens are only recognized if same-sex marriage is legal in their country of origin. The film never addresses this additional roadblock for Gu and Shinchi, as Gu’s native Macau hasn’t legalized same-sex marriage). This is a missed opportunity to push the conversation past the altar. As with other LGBTQ+ movements around the world, too much of a focus on marriage risks obscuring the continuing work of Taiwanese LGBTQ+ activists, such as in the aforementioned gaps in adoption and citizenship rights, or expanding transgender rights.

Despite this, Taiwan Equals Love’s compelling storytelling demonstrates that, while just a part of a larger LGBTQ+ movement, Taiwan’s legalization of same-sex marriage is nonetheless a momentous symbolic, material, and political win. The film excels at bringing human stories to the same-sex marriage debate, showing that marriage rights have sprawling legal impacts, and providing an accessible window into Taiwan’s LGBTQ+ activism. It does so through a genuinely well-crafted juxtaposition of three case studies. In this regard, despite its missed potential, Taiwan Equals Love offers a promising launchpad to start a deeper conversation about LGBTQ+ rights in Taiwan. 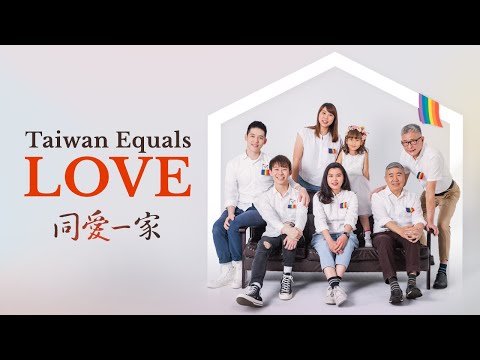