“Hijacking” and “family friendly” usually don’t go together in the same movie. Yet, 2020 South Korean comedy-drama Okay Madam somehow manages to weave those two concepts together. With its story about a middle-aged couple who must save their family from North Korean hijackers, the film is filled with familiar K-movie tropes, yet keeps its narrative fresh with a steady barrage of plot twists. Okay Madam won’t blow anyone’s mind—but it’ll provide reliable, family-friendly entertainment.

In its first dozen minutes, Okay Madam introduces us to wife Mi-young (Uhm Jung-hwa) and husband Seok-hwan, its protagonist couple. The former runs a market stall selling kkwabaegi (a type of Korean twisted donut), while the latter is a computer repairman. Both are in their late forties, and raise a spunky pre-teen daughter named Nari. What the family lacks in money, they seem to make up for with love.

As luck would have it, Mi-young unexpectedly wins the family a free trip to Hawaii through a bottlecap lottery. After overcoming some initial trepidation about lottery taxation, the couple decide to accept the trip, so that Nari can have her first overseas vacation.

Unfortunately, a group of North Koreans decide to hijack the family’s flight to Hawaii. They’re searching for a defected female operative, who apparently changed her appearance through plastic surgery. Alas, as the movie acknowledges in a pleasingly self-aware manner, “woman with plastic surgery” could be just about anybody in South Korea—so the North Koreans have a pretty hard time acquiring their target. As the situation escalates, Mi-young, Seok-hwan, and a cast of other motley characters begin stumbling upon opportunities to push back against the hijackers—and discover secrets about themselves and other passengers on the flight as well.

Reliance upon such tropes means that Okay Madam isn’t able to shift any paradigms, especially regarding North-South Korea relations. Instead of being a game-changer like 2020 hit K-drama Crash Landing On You (which dove into the inner lives of North Koreans), the film mostly reinforces existing South Korean media stereotypes about North Korea as a land of spies and factional struggle. However, there is one amusingly subversive moment when a North Korean hijacker says “let’s meet after reunification”—only to have a South Korean character laughingly answer “that’s never going to happen,” instead of saying “yes” as is the expectation in many other Korean movies.

However, just because it uses many tropes, doesn’t mean Okay Madam is a bad movie. In fact, it manages to weave together all these tropes into a taut narrative filled with constant twists. The film paces these plot twists admirably. It never loses momentum, and introduces each revelation—an identity reveal here, an environmental challenge there—in a droll, refreshing, and smooth manner. Despite being about a hijacking, Okay Madam never gets too violent either. After all, its protagonists must somehow thwart the hijackers in a way that allows young Nari to still enjoy her trip to Hawaii, sans lingering trauma.

While it won’t shift any societal discourse or pioneer new ways of filmmaking, Okay Madam competently fulfills its likely intended purpose of providing dynamic, family-friendly entertainment. The film is an easy watch, and provides adequate reward in return for minimal intellectual investment. 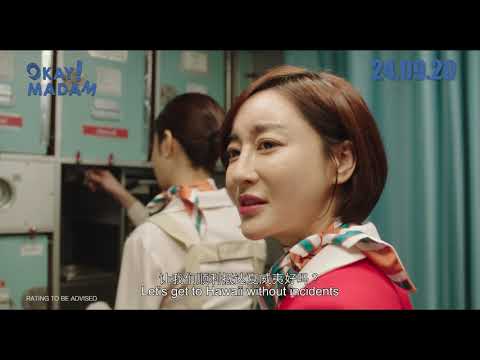 Okay Madam screened at the 2021 23rd Far East Film Festival in Udine, Italy. This article is part of Cinema Escapist’s dedicated coverage of that festival.

Okay Madam is available for streaming on Amazon Prime in the US and other select markets.