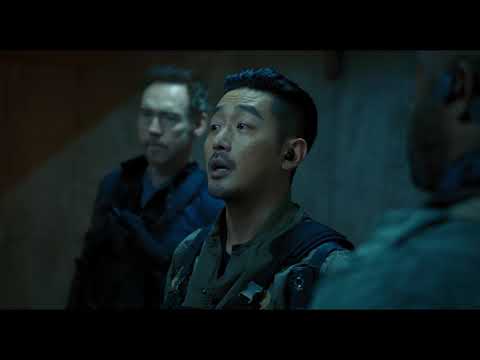 In The Prince, Machiavelli calls mercenaries “useless and dangerous”; any state that uses them sets itself up for decline. Yet, over the past two decades, mercenaries have enjoyed a renaissance—though they might prefer the term “private military contractors”.

Superstar K-actor Ha Jung-woo headlines Take Point as Captain Ahab, the leader of a PMC contingent. Like his namesake from Moby Dick, Ahab is a broken man haunted by his past, with a missing leg to boot.

Curiously, the similarities stop there. Unlike the Ahab of Moby Dick, the Ahab of Take Point isn’t consumed by revenge. Instead, he feels more like your classic flawed action movie hero—someone who must reconcile inhuman circumstances with his latent sense of humanity. While initially this might seem like a missed chance for narrative complexity, Take Point‘s departure from the original vengeful Ahab archetype frees the film to serve a different purpose.

That purpose, as we discover in the movie’s first minutes, is political commentary.

Take Point‘s opening sequence reveals that Captain Ahab’s team works for the CIA, who wants them to target North Korea’s leader. Why? Because doing so will help a bellicose, unpopular US president win key Great Lakes region swing states for his re-election. Furthermore, toppling North Korea would help the US win a pissing contest against a rising China—all the South Koreans caught in the middle be damned. A couple years ago, this might have sounded like laughable movie nonsense. Today, fewer people might laugh at this premise.

With such commentary, Take Point builds upon an established tradition of Korean media that take a critical view of the United States—and goes even further than many other members of that tradition (ex. The Host or Steel Rain)

Most of the Take Point’s dialog is in English, due to the fact that Ahab’s team (and Ahab himself) is filled with illegal immigrants to the US. There’s a juicy exchange where the CIA expresses concern over this fact, but ultimately still hires Ahab’s team for their competence—a not so subtle jab at how America derides illegal immigrants yet relies on them to do “dirty jobs”. The fact that such critiques happen in English make them feel far more targeted at American flaws.

Take Point offers another notable, and darkly amusing, critique. For the amount of injuries that happen in action movies, it’s surprising how none of them mention health insurance—except Take Point. Ahab’s men have a running joke around their lack of health insurance, and make fun of their one US citizen comrade for actually having coverage. Alas, this shows how Take Point isn’t always accurate or comprehensive with its jabs, as US citizens still have plenty of health insurance woes to deal with!

Perhaps all this reflects Koreans’ anxieties over how their peninsula has, in the past year, become a focus of attention for an impulsive and unreliable US administration. However, even if Take Point takes pointed shots at the United States, those shots are only part of a more universal message the film embodies.

Besides lots of gunfire and explosions, part of what makes Take Point so gripping and entertaining is how it approaches the concept of “togetherness”. Even though Take Point doesn’t offer some Ph.D. level philosophical analysis on this matter, it does more than I’d expect from a testosterone-filled action movie.

Captain Ahab’s central personal conflict is between how he personally values human life, yet performs work that treats human lives as expendable. This creates an interesting dynamic between Ahab and his team: contrary to the mercenary stereotype, many of Ahab’s men remain loyal to him because they believe he cares about them as people.

Furthermore, in a classic K-movie trope, Ahab ends up partnering with a North Korean doctor after the raid against North Korea’s leader goes wrong, exhorting: “if we want to get out of here alive, we need to work together.” All this builds dramatic tension, and makes us feel more emotionally invested in the characters’ struggles.

Without giving too much away: Take Point ends up becoming a tribute to building bridges and making personal sacrifices for the common good—the last thing you might expect from an action movie about private military contractors. Yet, the rise of PMCs is also one of the best reflections of our increasingly fragmented and selfish world, one home to electoral shenanigans and rampant xenophobia. PMCs can only proliferate when governments and powerful institutions put profits above people, and prioritize short term gain over long term progress—a recipe for decline, as even the cynical Machiavelli might remark.

In such a world, maybe we really do need an action movie that’ll blast us awake to build something better, together.