Review: “Life for Sale” Offers a Stylized and Complex Exploration of Mortality

Life for Sale is an ambitious work. While imperfect, the film is bold, and those willing to indulge some of its more visible flaws may find the journey rewarding.

Taking its central conceit from the Yukio Mishima novel of the same name, the movie follows depressed insurance salesman Ah-Liang, who resolves to commit suicide and takes out a newspaper ad offering to sell his life. As with the Mishima novel, a bizarre series of events ensues, as Ah-Liang is approached by a number of unusual figures–including those that have a hint of supernatural or science fiction elements.

The most surprising dimension of Life for Sale is the gradual tonal shift that takes place throughout the course of the film. The movie begins as a dark comedy, with Ah-Liang wittily reflecting on the economic cost of a life, and contemplating offing himself through absurd ways such as eating too many carrots or sticks of gum. His only real friend seems to be his despondent neighbor, Yu-jen, a single mother who shares his despair in the face of economic hardship but is kept tethered to life by her son, a teenager with a heart condition.

After Ah-Liang posts his ad, a supernaturally-flavored crime boss named Wang approaches Ah-Liang with a request to retrieve his wife’s pet dog. At the same time, a mysterious woman seeks to enlist Ah-Liang in a mysterious government experiment, the details of which remain unclear but could touch upon immortality and nymphomania.

From there, the film becomes increasingly dark and violent, as the existentialist themes riffed on humorously in the movie’s earlier parts become more serious. Some viewers may view this as a flaw in the work.  The transition is hardly seamless, with the film shifting from a discussion of capitalist malaise to more general ruminations on the meaninglessness of life and inevitability of death. Characterization also becomes inconsistent–for example, Yu-jen is a poorly written character who differs substantially before and after the film’s tonal shift, and has little motivation as a character apart from her desire to protect her son.

Life for Sale’s tonal shift is a gamble, and those willing to tolerate the narrative hiccups may appreciate what the film is trying to do. As the movie shifts towards pastiche ultra-violence, shades of Park Chan-wook emerge—the movie overtly tips its hat in homage to Park several times near the conclusion. But despite the clear intent to pay tribute, fight scenes, in particular, are perhaps too directly derivative of Park, as in Oldboy’s famous hallway fight scene. Some visual details also suggest Gaspar Noe’s Enter the Void as another possible influence.

Additionally, some viewers will no doubt feel unsatisfied by the fact that none of Life for Sale’s plot threads get resolved. Perhaps this lack of closure is a postmodern gesture—but it could easily derive from reliance on genre tropes and weak writing as well.

However, what Life for Sale lacks in narrative it partially makes up for with visuals. Incidental characters, even if they play limited roles with inadequate characterizations, possess vividly realized dress, character design, and mannerisms. Examples include crime boss Wang, a former baseball player henchman of Wang’s, the mysterious government experiment woman and her aide, and a karaoke-loving nemesis of Wang’s that is only introduced close to the end of the film. All of these characters are immediately recognizable, and chew up the scenery whenever they enter the equation.

Ultimately, Life for Sale simply has too many moving parts. The movie finds itself unbalanced due to its inability to tackle all plot threads at once, and the character motivations of even its central characters are not fleshed out. For example, despite being suicidal, Ah-Liang proves deeply committed to his parents after Wang kidnaps them to coerce him. Yu-jen also drops awkwardly out of the plot several times only to be sloppily reintroduced later on. Nevertheless, because it pairs daring narrative risks with skillful and stylized cinematography, Life for Sale is a cut above most recent Taiwanese movies. It proves a shame, then, that the film has not received more critical attention. 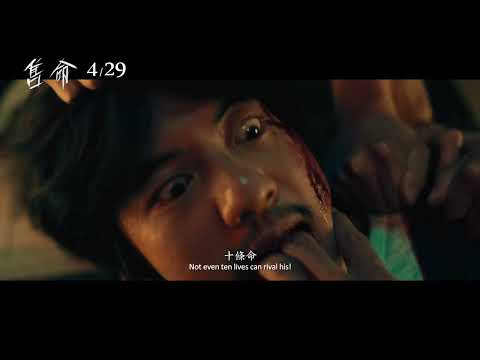 This article is part of Cinema Escapist‘s dedicated coverage of the 2022 New York Asian Film Festival.