Based on Yoko Ogawa’s popular novel, “Hotel Iris” is the latest movie that highlights Taiwan-Japan relations through the lens of love and lust.

What happens when Fifty Shades of Grey meets Taiwan-Japan relations? Well, probably something like Hotel Iris, a Taiwan-Japan co-production that just premiered at the 2021 Osaka Asian Film Festival. Adapted from the eponymous Japanese novel about a 17 year-old girl who starts a sadomasochistic relationship with a man in his sixties, the movie blends Mandarin and Japanese dialog and transplants the narrative to the island of Kinmen—best known as a frontline of Cold War conflict, at only a few kilometers off the coast of the Chinese mainland.

While those who enjoy transgressive romances will likely find the film adequate if not orgastic, Hotel Iris offers more for those interested in geopolitics to munch on. It’s just the latest of many Taiwanese films that navigate the island’s historical and cultural affinity for Japan, albeit with a new twist through its Kinmen setting.

Hotel Iris begins with an innocent-looking girl staring at a small island. The girl is Mari, a seventeen year-old who lives a cloistered existence working at the Hotel Iris—a boutique inn that her domineering widowed mother owns. One night, Mari observes an older man pushing a prostitute down the hotel’s stairs. Instead of fear, she feels fascination—and follows the man back to his home on the small island in the opening shot. He spots her, and Mari learns he is a Japanese translator of Russian fiction in his sixties.

Through letters and secret rendezvouses, Mari and the translator descend into a forbidden relationship. This is no vanilla love story; Mari feels haunted by memories of her dead father, and the translator by those of his dead wife. United in loneliness, the two find meaning through sadomasochistic sex.

In terms of criteria that traditional film critics care about, Hotel Iris feels perfectly adequate, at least for those who like Fifty Shades of Grey-esque romance movies. Its plot isn’t too hard to follow, and there’s no fault to find with the camerawork. The film seems like an abridged visualization of the novel. At least judging from reader reviews, the book is much more gratuitous with sex scenes and examinations of Mari’s psychological monologue. Viewers who’ve actually read the novel, or enjoy artistic movies that dive into carnal desire, will probably have a more meaningful take on this dimension.

For other audiences—Hotel Iris is still worth analyzing as yet another example of Taiwan-Japan affinity, a dynamic present through the film.

Compared to neighboring countries, in which the lingering memory of the Japanese empire has proved a stumbling block to good relations, Taiwan and Japan get along extremely well. Most Taiwanese and Japanese have positive impressions of each others’ countries, Japanese popular culture is extremely popular in Taiwan, and many Taiwanese also feel a sense of nostalgia for when Japan colonized Taiwan between 1895 and 1945. From 2000’s Yi Yi to 2008’s Cape No. 7  and beyond, numerous Taiwanese movies—especially those with romantic themes–reflect this transnational intimacy. On the note of transgressive love, there’s even a 2015 romance movie called Sashimi, which stars Yui Hatano (one of Japan’s most popular adult film actresses) alongside Lee Kang-sheng (one of Taiwan’s most renowned art house actors).

Hotel Iris feels like yet another attempt to cash in on Taiwan-Japan amity; it follows heavily in these other movies’ footsteps. The translator is played by Masatoshi Nagase, who also starred in 2014 Taiwanese blockbuster called Kano, which drummed up nostalgia with a story of Taiwanese baseball during the Japanese colonial period. Lee Kang-sheng also makes an appearance in Hotel Iris, as the boatman that transports the translator to his island abode. The film’s producers likely counted on Taiwanese audiences being familiar with the novel, recognizing cast members, and having some imprinted desire to watch another Taiwan-Japan romance.

Curiously though, Hotel Iris situates its story on the island of Kinmen. Close enough to China to get shelled by the People’s Liberation Army every other day between 1958 and 1978, Kinmen didn’t experience Japanese colonization like the rest of Taiwan. Thus, in contrast with other Taiwanese, Kinmenese feel a deeper affinity for China than Japan.

From an artistic angle, the choice to shoot in Kinmen makes a lot of sense. Kinmen’s distinctive traditional architecture creates a timeless and mysterious ambience that complements Hotel Iris’ themes, and the coastal islet of Jiangongyu plays a memorable role as the translator’s home island. From a political and historical angle though, this choice feels odd on the surface—but becomes more meaningful when you dig beneath.

While Hotel Iris’ producers likely didn’t have political intentions, painting Kinmen with the brush of Taiwan-Japan romance pulls the island closer to contemporary notions of Taiwanese identity— which uses Taiwan’s socio-historical connection to Japan as a way to distinguish Taiwan from China. Using Kinmen as host to a story about forbidden love is also quite fitting. Because Taiwan’s government heavily militarized the island during the Cold War, Kinmen’s sexual politics were quite fraught. For example, the island had a system of state-sponsored brothels meant to help soldiers “relieve pressure” and prevent rape of local women. In fact, many younger Taiwanese learned about this system through another movie shot on Kinmen—2015’s Paradise in Service.

To the casual viewer, Hotel Iris might seem like an East Asian counterpart to Fifty Shades of Grey. It’s also based on a BDSM-themed novel, and probably caters to a similar audience profile. Though competent, the film’s storyline and technique aren’t anything to write home about, at least if you’re not in its target demographic. However, Hotel Iris’ political and historical context may prove more arousing. 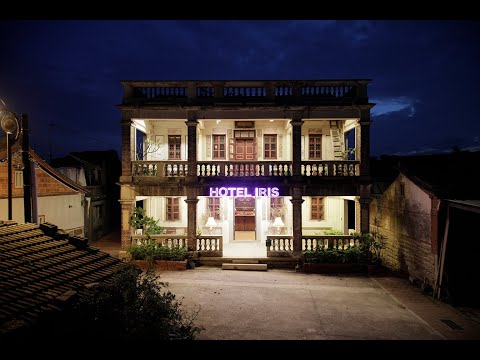