Review: Catalan Drama “Alcarràs” Is a Contemplative Ode to Family and Farming

Winner of the Golden Bear, Carla Simón’s “Alcarràs” follows a Catalan family as they deal with losing their traditional farmlands.

For the Solé family, land is livelihood. Having cultivated their land since the Spanish Civil War, family members spend their days harvesting peaches in the Catalan sun, despite the ever-dropping prices the fruit can fetch on the market. However, the Solés’ connection to the land is more than just financial. It is their source of identity, that which ties them together.

When they receive an eviction notice due to lack of formal proof of ownership, the Solés’ traditional way of life is threatened, and cracks within the family unit begin to form. This conflict is the backdrop for Alcarràs, the mournful second feature of Spanish director Carla Simón.

While its plot is simple, the film is elevated by the naturalistic performances of its ensemble cast. Played by local, non-professional actors, each character feels lived in, nuanced, and true to life. There is the exuberant six-year-old Iris (played by Ainet Jounou), the quietly resigned grandfather Rogelio (Josep Abad), the agitated father Quimet (Jordi Pujol Dolcet), and many more. All members of the family are trying to cope with the loss of their home, desperately clinging to the fraying strands of a regular summer.

One of the reasons that Simón’s characters feel so lifelike is because they are imperfect. The teenage daughter Mariona (Xènia Roset) can be moody and insecure, Quimet is frequently temperamental, the son Roger (Albert Bosch) self-medicates with drugs and clubbing, and old Rogelio withdraws into himself in silent impotence, shouldering the responsibility for the situation that the family is in. Alcarràs is a true ensemble film, dividing its time equally among the many members of the Solé family. The film is driven by the smell of peaches, the warmth of sunlight, and the sensation of dirt, as much as it is by plot. No single scene is vastly more important than any other. Rather, much like real life, a series of moments compose the existence of this family.

While the lack of a central protagonist leaves Alcarràs missing narrative focus at times, Simón uses this vignette-based structure to reveal nuances and provide depth to her characters. In a short, seemingly irrelevant moment, Mariona practices her dance moves while her aunt provides encouragement. Mariona is awkward at first, but gradually grows more comfortable after the positive affirmation. It is a small moment, yet it reveals everything that you need to know about the characters and their relationship – both the aunt’s love for her niece and Mariona’s insecurity and desire for approval. Simón imbues the family dynamics with a sense of realism that is deeply relatable.

However, while we see glimpses into the lives of these characters, we are kept at a distance. There are no great monologues espousing characters’ internal thoughts. Simón shows how each family member copes with the tension in subtle ways. A powerful scene comes when Quinot finally sheds tears of frustration, a fleeting moment of emotional vulnerability amidst his harsh and aggressive exterior. It is one of the few moments that feels truly cinematic—much of the film plays like a docu-drama, its realism aided by Simón’s handheld shooting style.

The story of the Solé family’s eviction is one familiar to rural communities and Indigenous groups around the world. Families practice traditional ways of life and live on land passed down through generations. Suddenly, others arrive on their land, seeking to exploit the resources, and demand proof of ownership. No formal contracts or deeds of ownership exist, since they were never needed. The newcomers claim ownership and begin to settle the land, forcing the previous occupants to either assimilate or leave, abandoning their former ways of life either way.

While the newcomers in this film are not members of an empire or a hostile state, this is undoubtedly a form of economic colonialism. It is a story that will resonate with rural communities, not only in Catalonia, but also around the world. Over the last three years, farmers have been protesting in the Netherlands, Spain, India, France, and Germany, among others.

These protests are part of the ongoing clash between farmers and an increasing push towards modernization. In this way, the political undercurrent of Alcarràs feels deeply tied to our current political moment. In her acceptance speech at the Berlin International Film Festival, Simón dedicated the award to the farmers “who cultivate the land every day to bring the food to our plates,” describing it as “a form of resistance.”

Despite the urban-rural conflict at play, Simón chooses to tell this story indirectly, using the family and their lifestyle as her primary focus. The conflict is revealed through the juxtaposition of the dirt, the sunshine, and the leaves with the cold artificiality of the solar panel farm erected by the new developers.

This lack of direct narrative focus comes at a cost—the slow pacing and contemplative nature make Alcarràs feel sluggish at times. Many viewers may find themselves checking their watch.

However, though the vignette-focused narrative may slow the pacing, Simon’s subtle direction and the naturalistic performances of the ensemble cast imbue this tragedy with a sense of wistful beauty. It is a mood piece, a character study with the family as its central character. It asks for patience from its viewer and, if the viewer is open, it is a rewarding experience.

The film has much affection for tradition, celebrating local songs and romanticizing farming as a way of life. There is a real sense of loss in seeing farmlands torn down; it’s not just trees getting destroyed, but also a way of life practiced for generations. As the grandfather sits under a peach tree, savoring a moment that is all too fleeting, the audience knows that change is coming and all of this will soon be but a memory. Alcarràs plays like a nostalgic funeral dirge, honoring a lifestyle that seems increasingly doomed. 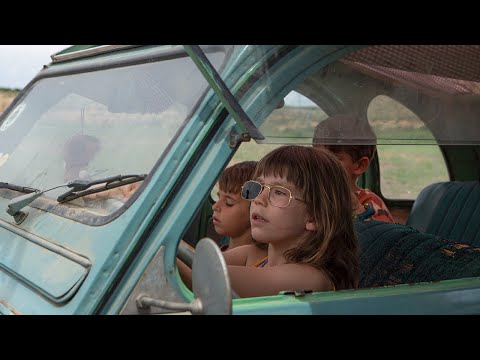 This article is part of Cinema Escapist’s dedicated coverage of the 2022 Vancouver International Film Festival.

Review: "Prayers for the Stolen" Offers a Beautiful and Harrowing Look at Human Trafficking in Mexico

Review: "Prayers for the Stolen" Offers a Beautiful and Harrowing Look at Human Trafficking in Mexico