Review: Japanese Film “by the window” Meditates on Love And Creativity in a Naturalistic Fashion

Rikiya Imaizumi’s “by the window” dives into a coterie of Japanese writers who muse about the meaning of life.

by the window, directed by Rikiya Imaizumi, proves masterful. The film does not shy away from tackling complex issues, such as the nature of love or creativity, and approaches them in a wonderfully naturalistic fashion.

Part of what stands out most about by the window is how it does not reveal its cards immediately. The movie begins with its protagonist, a freelance writer and one-time novelist named Ichikawa Shigemi, interviewing a female high school novelist whose most recent work seems to have resonated with him. Subsequently, Ichikawa and the novelist, Kubo Rua, develop an unusual friendship, as Kubo offers to show him the real-world individuals on which the protagonist of her novel is based.

For the most part, however, the film is about Ichikawa dealing with the ramifications of an affair that his wife, Sai, is conducting with his close friend, fellow writer Arakawa En. Ichikawa is conscious of the affair, but reluctant to confront Sai about it. This is because Ichikawa feels neither surprise nor shock at the affair, and has become wracked with guilt over whether he might simply be emotionally dead inside.

The first half of by the window mainly revolves around Ichikawa and Kubo’s interactions. Although the pairing of an older man with a younger girl is common in everything from Luc Besson’s Léon to, say, Lolita, the two characters have superb chemistry. The two share an indifference to the world, and Ichikawa seems to be trying to understand something about his lack of creative inspiration through interacting with Kubo. Even as this section of the film frequently deals with heady topics, naturalistic writing manages to make it work.

The second half of the movie more directly grapples with Ichikawa handling his wife’s affair. Although viewers are not given very much detail about how and why Ichikawa, Arakawa, and Sai are friends, apart from that they all work in the publishing industry, the movie ably shows the tangled web of their interpersonal relations.

by the window excels because of its strong script and nuanced performances by almost all cast members.Very little actually occurs in the film, and it plays out as almost entirely a sequence of one-on-one conversations that Ichikawa has with other characters. These include exchanges between Ichikawa and Kubo, with Sai, and with Arakawa, as well as the various odd acquaintances that Kubo based the protagonist of her novel on. Though many of these characters only appear briefly in the movie, each interaction adds thematically to the film; the strength of acting allows for this. Well-composed shots, using a number of elements that recur visually, further accentuate by the window.

Furthermore, even as the film focuses on  Ichikawa’s emotional arc, Sai and Arakawa are developed as sophisticated characters in their own right. Sai struggles with the fact that she loves Ichikawa but he may not reciprocate, whileArakawa—despite being a best-selling novelist— struggles under the weight of his perceived inferiority to Ichikawa. While Ichikawa only ever produced one novel and never wrote anything afterward, Arakawa believes that Ichikawa would’ve become the superior writer if he had kept at it.

While by the window has an open-ended conclusion that some viewers may not find emotionally satisfying, perhaps that is simply an accurate reflection of how the questions its characters explore lack real answers. Regardless, by the window is a journey worth taking with its characters. 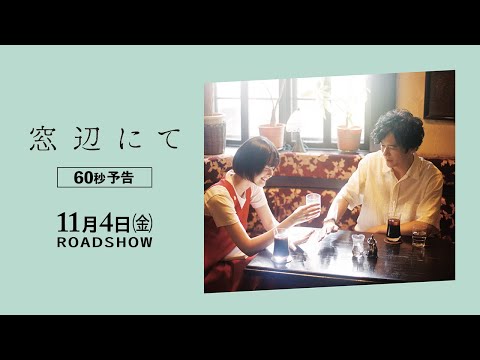