“Will travel for food!”

Thus echoes the modern yuppie’s battle cry. Food shows discover the hottest eats in the coolest places, and hordes of hungry yuppies follow. They fly across oceans with iPhones in hand, striving to adorn their Instagrams with the sheen of yet another Michelin star. Food is the most #authentic way to experience a culture, they say. Through food, you taste a locale’s soul.

However, as the Japanese food series Hyper HardBoiled Gourmet Report reminds us, “authenticity” doesn’t always fit a colorful Instagram aesthetic. Available for streaming on Netflix, the show has a simple objective: find the world’s most marginalized people—child soldiers, cult members, criminals—and film what they eat.

To do this, Hyper HardBoiled Gourmet Report takes a thin base of Anthony Bourdain’s Parts Unknown, layers on the gonzo style of VICE guides, and adds a garnish of measured Japanese commentary à la Terrace House. It’s a sharply distinctive blend of flavors, one that’ll likely appeal to adventurous travelers more than diehard foodies.

Everyone gets hungry. To eat is to live. The world gets exposed through food. Hyper HardBoiled Gourmet Report kicks off each of its episodes with these three simple pronouncements. It’s a remarkably frank assessment about life, reminiscent of American writer Kurt Vonnegut’s stoic take on death—”so it goes.”

It’s this desire to “expose the world through food” that draws comparisons with Parts Unknown, which intended to explore the cultures of lesser-trafficked locales through their cuisines. Parts Unknown host Anthony Bourdain traveled to Libya, Iran, and other “marginal” locations (by Western standards), surveying their socio-political climates whilst dining alongside local culinary and artistic luminaries.

Gourmet Report leans heavily into this “marginal location” dimension of food. Stylistically though, its episodes feel more like collections of VICE guide videos. Each episode consists of at least two distinct segments, shot with a handheld camera by a producer who makes pretty sketchy decisions—like entering a cemetery where drug-addicted former child soldiers live, against the advice of a local fixer.

I wouldn’t be surprised if Gourmet Report’s showrunners looked at VICE guides that were too gritty for Munchies segments, and chose those as the show’s topics. For instance, Gourmet Report’s first episode covers former Liberian child soldiers and Taiwanese mafia members, two subjects that VICE has also covered.

Despite the “gourmet” in its title, Hyper HardBoiled Gourmet Report focuses less on finding tasty food and more on finding realistic food. The show eschews Parts Unknown’s focus on local luminaries and instead goes straight to the figurative “man on the street.” As it turns out, Liberian child soldiers and Middle Eastern refugees trapped in Serbia do not eat Instagram-optimized meals.

For those more interested in adventurous travel than gourmet food, this is a welcome respite—no other self-proclaimed food shows features cornmeal pilfered from international food aid packages. Hyper HardBoiled Gourmet Report also offers minimal commentary about the foods’ actual preparation process and flavor. After all, the self-masturbatory vocabulary a stereotypical foodie uses to describe their latest tasting menu won’t work so well on a Siberian drug addict’s leftover potatoes.

Sure, this approach might turn off diehard foodies. However, it represents a degree of honesty I’ve never seen in any other food show. Sure, everyone loves tasty and photogenic food. But outside the bubble of first world yuppies, the primary purpose of food isn’t to adorn Instagram feeds. Instead, it’s to provide calories so that we can continue plodding on with this journey called life. It’s about time we had a food show that acknowledges this reality.

A Food Show With Japanese Flavor

On this front, Gourmet Report uses a technique common in Japanese shows, but rare in Western ones: the in-show commentator. Though segments of the show’s gonzo producer journeying around the world remain the main focus, a comedian named Kazutoyo Koyabu provides running commentary throughout each episode via a picture-in-picture display. Fans of the Netflix reality show Terrace House might find the tone, if not format, of this commentary familiar. Koyabu acts as a friendly companion to viewers, making measured yet entertaining remarks that spark deeper engagement with the show.

It’s also quite amusing that several of Gourmet Report’s segments about “marginalized people” take place in the US. Seeing slices of America juxtaposed against Middle Eastern refugees and Liberian child soldiers offers a great reality check against those prone to cry “America über alles.” With a classically Japanese air of respectful distance, Gourmet Report asks: so this is what we can expect from the world’s most powerful country?

A Taste of Reality

For a food show, Hyper HardBoiled Gourmet Report sure has some unique flavor pairings. I would’ve never thought the danger-defying style of VICE guides would go well with a Terrace House-esque air of measured commentary—yet it somehow does. While most food shows cater to the herds of foodies, Gourmet Report does not. Instead, it subverts the modern developed world’s over-glorification of food.

In a world polluted by the loud virtual shrills of Michelin star grubbers, it’s more essential than ever to have a reality check about why people eat. Hint: usually, it’s not to impress their followers. Just because food isn’t Instagrammable, doesn’t mean it’s less interesting or less worth exploring—that’s a fact Hyper HardBoiled Gourmet Report gets more than any other food show I’ve seen. 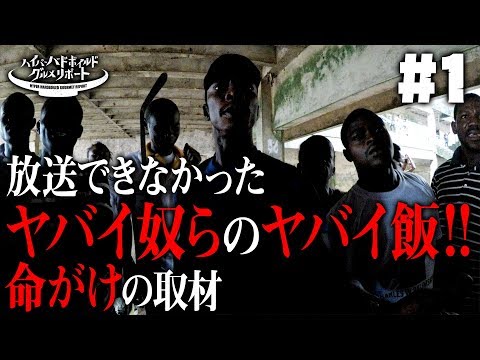