Review: “Extro” Captures the Unglamorous Hardships of Being a Background Actor

Working as a background actor in Japan is not as riveting as it first appears. Treated more often like props than humans, extras must endure indignities like bad weather and arbitrary directions while waiting daylong on the sidelines at low or no pay.

Capturing the real-life unglamorous hardships and frustrations of being an extra with a hint of situational irony, Japanese mockumentary Extro is a rare rule-defying feature that effectively blends together fact and fiction.

Director Murahashi conceived this mockumentary after encountering countless extras while working at Japanese national broadcaster NHK. He observed that the extras had colorful personalities and came from all walks of life. Fascinated by the thought of bringing the faces and voices of these otherwise invisible extras to light on the main screen, Murahashi gives Extro a diverse array of characters—who arrive on set with vain ambitions and veiled identities. The extras in Extro belong to a volunteer cooperative called The Lark Agency. A vast array of characters hold membership: a 64-year-old dental technician, a middle-aged woman prone to tripping on set, a vengeance-bearing now-comedian, and even—hilariously—an incognito drug lord.

The story opens with one of Lark’s extras, Kozo Haginoya (played by Kozo Haginoya, a first-time actor and a rice farmer in real-life), waking up  for his 4 a.m. filming day morning routine—which includes practicing tongue twisters in his rubbish car for lines he will likely not speak. The mockumentary intertwines the fictional and real-life Haginoyas with a strong bond: both share the love of film and aspire to become an actor. In the scripted line where Haginoya says “I’m happy if I can be seen on the screen for a moment,” there is inimitable sincerity in his eyes that conveys his true love towards film. From the morning routine forward, Extro’s first half proceeds as a candid documentary—using a talking-head testimonial approach that integrates Haginoya’s real thoughts, actions, and facial expressions.

The Hardships of Extras

Inspired by American predecessor This Is Spinal Tap, Extro offers an unvarnished take on film production. As Haginoya stumbles onto the set of samurai crime-romance drama The Claws of Edo as an extra, Extro provides an insider’s eye into the laborious dynamics of the film set: directorial yells, clapperboard cuts, disturbances, retakes, cuts, and the exasperated sighs of extras waiting for their delayed cue in the sidelines.

Standing around all day upholding a wooden farmer’s yoke, Haginoya eventually collapses with a stomach ache — and causes lead actor and samurai star Koji Yamamoto to burst out in annoyance. It’s yet another jarring yet realistic reminder that moviemaking isn’t particularly glamorous.

However, Extro also shows Yamamoto later complimenting Haginoya’s dedication to acting. The film contains many heartfelt scenes like this, which highlight the perseverance of under-appreciated extras. This helps Extro smash the formulaic frame of Japanese mockumentaries, which tend to churn out overdramatic caricatures of their main subjects—a trope notably spearheaded by Toshio Matsumoto’s Funeral Parade of Roses. Instead of one-dimensional archetypes, both extras and stars in Extro have an honest chance to demonstrate their depth and evolution as individuals.

Beyond realism and earnest emotion, Extro also resorts to situational irony and weighty slapstick to hammer in comedic relief. This allows Extro to skewer certain tropes and phenomena in Japanese entertainment, but also feels overwrought at times, falling flat with non-Japanese audiences.

For example, a second faux film screened within the mockumentary is just as bizarre as its very title: Prehistoric Space Monster Gamogedorah. This movie hints at Japan’s  over-proliferation of Godzilla copycats, some of which seem just as if not even more sensational and perplexing. Both Prehistoric Space Monster Gamogedorah and The Claws of Edo also get cancelled as their Japanese co-stars become embroiled in public drunkenness scandals. This is a fun poke at Japan’s cancel culture, and the expectation for celebrities to emit a desirably innocent image.

However, the oddities and slapstick don’t always hit their mark. The latter half of the film rivets on a final peculiar twist: a mismatched team of undercover police officers decide to infiltrate the set disguised as extras, putting Lark’s resident drug lord in danger. The officers explain that in both acting and policing, they must avoid drawing attention to themselves. Ironically though, the cops are repeatedly called out for their outlandish behavior on set. While well-intentioned, this plot point—like many others—feels excessive and garbled; Extro’s attempt at humor here stumbles just like the acting skills of the amateur undercover cops.

“Extro” is an inventive portmanteau—as is the term “mockumentary”—that combines the terms “extras” and “maestros.” As real-world director Nobuhiko Obayashi, says in the film,“extras aren’t just extraneous… they create the atmosphere and emotion of movies, and they are part of the beauty and power of film.” Like maestros vivifying a symphony to its mastery, “extros” help establish the worldmaking of a movie.

Featuring a tangled storyline that both inspires and amuses, Extro offers an inside-out role reversal of the traditionally star-heavy film process by casting the spotlight on underseen extras. Unlike traditional mockumentaries, Extro starts off with an approach to storytelling that, despite its later humorous crumblings, honestly portrays the difficulties of being a film extra for a living. 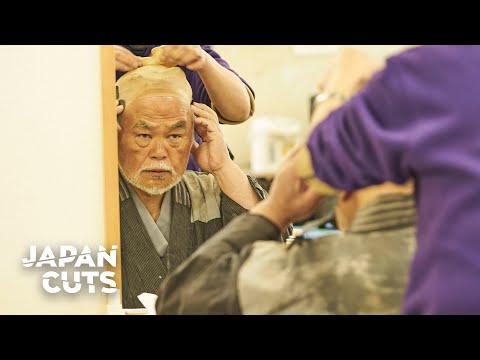 Extro is screening at Japan Cuts 2020, which runs virtually for US audiences between July 17, 2020 and July 30, 2020. Purchase tickets at the Japan Cuts website.