"Train to Busan" sequel "Peninsula" paints a dynamic post-apocalypse filled with flares and car chases, but lacks depth and distinctiveness.

Now, Yeon Sang-ho extends Train to Busan’s creative universe into the post-apocalypse with a sequel, Peninsula. Selected for the canceled 2020 Cannes Film Festival, Peninsula became one of the most-watched films in South Korea since the coronavirus outbreak. Equipped with high-speed car chases that light up a zombie-strewn hellscape in Incheon, this blockbuster viscerally highlights the moral consequences of corruption and shoddy decision-making.

Despite its larger budget, wider locations, and nimble camerawork that revitalizes action with eye-whirling scenes, Peninsula disappoints—with less originality and character depth when compared with Train to Busan. Contrary to public anticipation, zombies are less of a taut focus. Instead, an overwhelming amount of flares, car-slams, and self-sacrificial dives take center stage.

Peninsula begins with a similar premise to the Redeker Plan in popular zombie novel World War Z. Four years after Train to Busan, the international community has quarantined the Korean peninsula’s southern half to save other countries from infection. Before the quarantine, a few South Koreans fled to Hong Kong—including former army Captain Jung-seok (Gang Dong-won) and his brother-in-law Chul-min (Kim Do-yoon).

In Hong Kong, locals treat Koreans as second-class citizens, which some South Korean viewers have analogized to their own country’s real-life treatment of Yemeni refugees on Jeju Island. To escape this hopeless life, Jung-seok and Chul-min agree to re-enter a devastated Incheon. There, they aim to retrieve a food truck loaded with cash, and deliver it back to Hong Kong triads for a cut of the money. 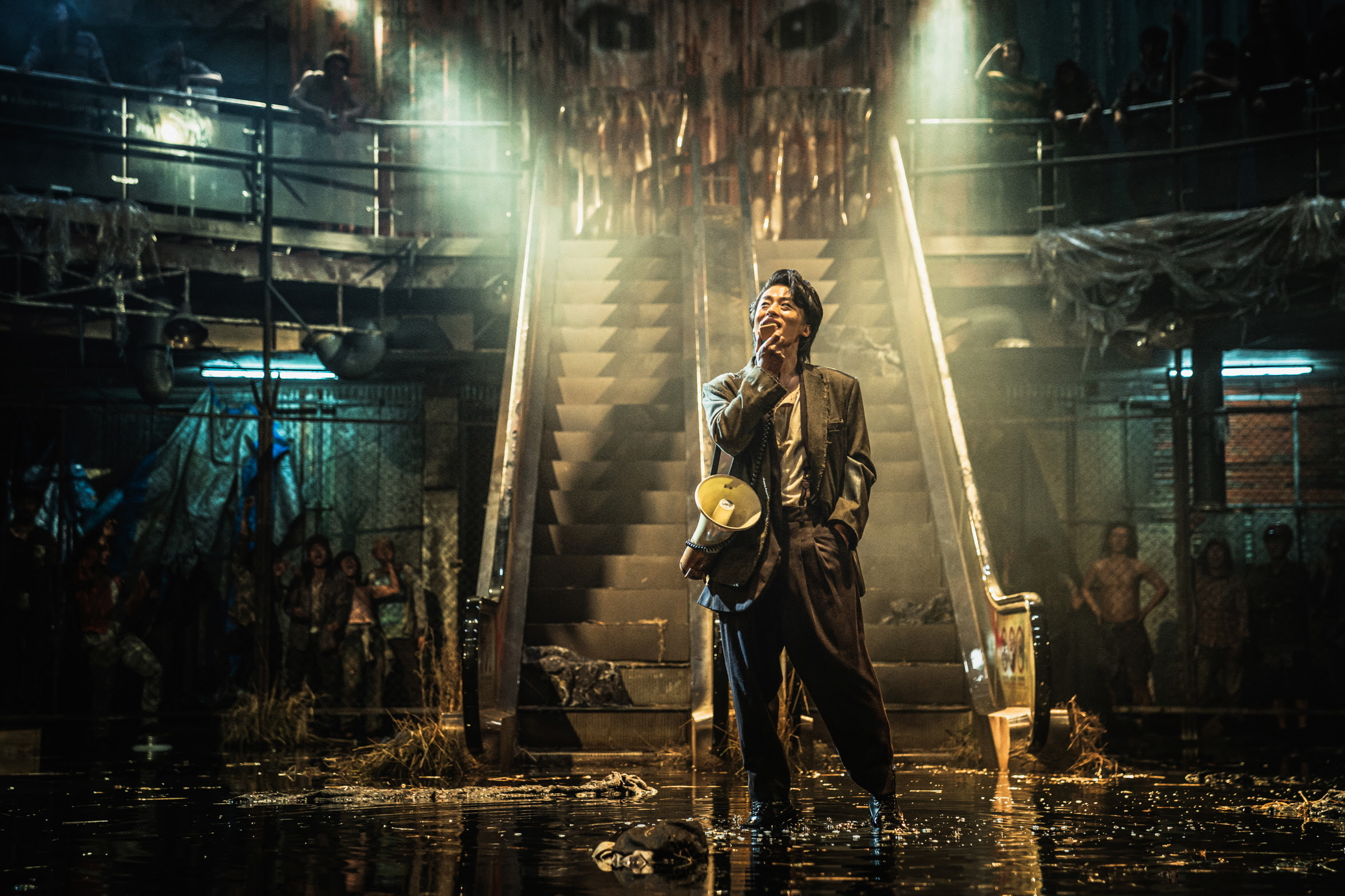 During an interview with Korean media, director Yeon Sang-ho said that he wanted to depict “life in a world where humanity has crumbled, and brutality dominates.” Thus, like Train to Busan, Peninsula embraces the idea that humans might be worse than zombies. However, Peninsula leans far more into the “human” dimension of that equation than its predecessor.

Unlike those in Train to Busan, Peninsula’s characters are all already familiar with the zombie pandemic. The zombies depicted in Peninsula feel rather mild: they’re virtually blind at night, and easily killed with guns. Furthermore, there aren’t many heartbreaking moments where key characters get infected—which dilutes any direct emotional value that zombies might provide. Instead, zombies are just another weapon that uninfected humans use to fight against or manipulate each other. This may disappoint any viewers looking for heart and stomach-wrenching zombie action.

Instead of zombies, Peninsula’s main antagonists are a detachment of rogue South Korean soldiers called Unit 631. Reminiscent of Apocalypse Now, the unit plunged into the heart of Korean zombie darkness to save civilians, but devolved into a violent horde of gun-toting grifters who force refugees into sadistic underground zombie-fighting gladiator shows. Korean commentators have noticed how the unit’s name is an oblique reference to Imperial Japan’s Unit 731, a biological and chemical warfare unit that undertook lethal human experimentation during World War II.

Just like Train to Busan, Peninsula also offers a dichotomy of selfishness versus selflessness. After Jung-seok and Chul-min arrive in Incheon, Unit 631  chases the money truck with flares and captures Chul-min. Twisting Yeon Sang-ho’s recurrent theme on the darkness of human nature, Peninsula contrasts the cruelty of Unit 631 with the humanity of a mother-and-daughters trio (Lee Jung-hyun, Lee Re, Lee Ye-won) who rescue Jung-seok. As it turns out, Jung-seok refused to rescue the very same trio four years ago when he was fleeing to Hong Kong—a guilt from the past that continually haunts him.

The dichotomy of selfishness and selflessness overshines in Peninsula, where even Unit 631 soldiers are blindly loyal to Sergeant First Class Hwang (Kim Min-jae) and Captain Seo (Koo Kyo-hwan), as they march headfirst into apparent suicide missions. Likewise, Jung-seok’s saviors, despite only meeting him a day ago, seem willing to sacrifice their lives to rescue him.

Unfortunately, Peninsula doesn’t spend much effort exploring how these characters find selflessness amidst selfishness, or providing commentary that Train to Busan didn’t already have. Instead, the film carries a sense of dogmatic optimism that moral redemption will win out. This means many characters act according to unsurprising archetypes; anyone who’s seen Train to Busan can probably predict how Peninsula might end. Rather than focus on character development and depth, Peninsula leans more heavily into action and melodrama.

If Train to Busan feels like World War Z and Snowpiercer mashed together, then Peninsula is a multi-tiered stitching of World War Z and Mad Max. Like Mad Max, it also has many grungy, fast-paced vehicular sequences. A heavily CG-rendered cross-city armored SUV chase is one of the film’s few delights—consisting of flips and zombie splatters, parkour and explosions.

Peninsula also only used one set for all of its scenes—spanning numerous exhilarating locations like the fence-strapped Unit 631 fortress, the deserted streets of Incheon, and the underground back-alleys of Hong Kong. While logistically impressive, this doesn’t make the film more worthwhile. As opposed to the claustrophobic but focused setting of a speeding train in Train to Busan, Peninsula opts for nauseous movement and atmospheric setting over depth.

It feels like Peninsula primarily tried to break away from its predecessor by upscaling action and dynamism. Peninsula contains all the same moral quandaries of Train to Busan, and simply adds more CGI, car chases, and slow-mo on top rather than finding new philosophical points to muse about. That said, Peninsula is still one fresh and thrilling “ride” to enjoy amidst coronavirus lockdowns, if you’re looking for a straightforward zombie action flick. The film is decent; it just doesn’t escape the shine of its predecessor.

If it’s any consolation, the fact that Korea continues to make zombie blockbusters like Peninsula might be good for the world in a different way. Back in 2016, Train to Busan sparked a wave of South Korean public interest about viral outbreak containment, especially after the nation’s poor handling of a Middle East Respiratory Syndrome (MERS) outbreak the year before.

Perhaps, this movie-spurred public demand contributed to South Korea’s government investing more heavily in pandemic management measures. Those measures are now helping the country cope with COVID-19 more effectively than many others, and allowed Peninsula to actually enjoy a theatrical release. Hopefully Peninsula will at least maintain this virtuous cycle of public health awareness in Korea, and spread it further worldwide. 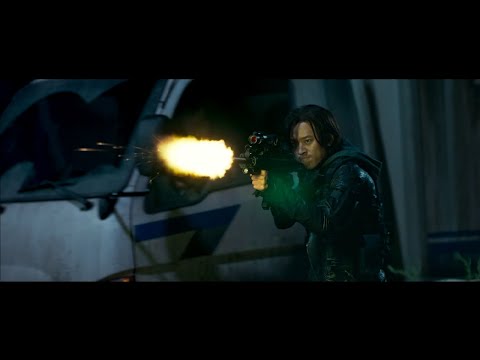 Peninsula is currently showing in Canadian theaters and will have a US release starting August 21, 2020. Buy tickets and learn more here.