Hao Wu's latest documentary features never-before-seen footage of a hospital struggling to save lives amidst the early days of the coronavirus outbreak in China.

In late December, Chinese health authorities detected a mysterious unknown pneumonia circulating around Wuhan. Internet rumors quickly abound with theories as to its nature: was it a resurgence of SARS? How deadly and infectious was the new virus? Was it made in a lab or did it have natural origins?

The opening scenes of 76 Days reflect the confusion and chaos in Wuhan during the early days of the COVID-19 pandemic. The film—one of the first to document the start of the global pandemic—opens with scenes of faceless medical workers in head-to-toe protective equipment trying to treat patients. While doing so, they try to manage a crowd of people trying to get a coveted hospital bed. Over a heart-wrenching hour and a half, 76 Days shows us scenes of patients struggling to survive through an unknown virus, and the bravery and perseverance of front-line medical workers trying to save lives.

76 Days also offers unprecedented, exclusive footage from inside a Wuhan hospital during the worst days of the pandemic. The beautifully-edited films not only serves to inform the public about the challenges that medical workers in China faced, but also humanizes the pandemic that mass media has reduced to daily caes counts and buzzwords like “contact tracing”.

Amidst the chaos of an emergent pandemic, Wuhan was facing a real problem: the city simply didn’t have enough hospital beds to house all the confirmed cases of COVID-19. The situation got so dire that patients with other medical needs were turned away from hospitals to make room for COVID-19 patients.

“It also became apparent that the situation was dire in Wuhan,” said director Hao Wu. “People were dying, hospitals were overwhelmed, and medical personnel did not have adequate protection so they were getting sick and dying too.”

76 Days excels at putting the toll of the pandemic into human terms. In early 2020, most people without a connection to Wuhan, or more broadly China, only saw the pandemic in terms of daily case counts reported by government health authorities. However, behind every statistic is a human face, and behind every death is a legion of grieving family members and friends.

The first half of 76 Days is filled with heart-wrenching scenes of emotional turmoil. In one scene, a nurse whose father just passed wails for her lost parent, but has to regain composure so other people’s parents aren’t taken by the disease. In a later scene, we see a nurse gathering the personal effects of an elderly lady, while on the phone with her daughter. Her remains will be cremated, without giving her family members a chance to give a final goodbye. She leaves behind only a jade bracelet for her family to remember her by. Audience members need only to multiply the stories by a factor of four thousand to understand the scale of the tragedy.

The most stunning part of 76 Days was its unfettered access to the inside of a hospital. The Chinese government is not widely known for having vast press freedoms, and in the early days of the COVID-19 pandemic, the government sought to control the public narrative.

China’s ubiquitous social media platform WeChat moved quickly to censor messages containing any number of references to the virus. Meanwhile, early COVID-19 whistleblower Li Wenliang’s death triggered rarely-seen widespread online discontent. Local public security officials detained Li after he sounded the alarm on the novel pneumonia in group chats, and made him sign a document saying that he “understood” that if he continued to discuss the virus, he would be punished. Upon Li’s passing, Chinese social media ran abound with hashtags like “#不明白” (“I don’t understand”), in stark contrast with Li’s note that he “understands” the illegality of his speech.

Unsurprisingly, one of the filmmakers is credited as “anonymous” to minimize the chance of negative repercussions from their work on the film.

“My two co-directors are reporters who were sent to cover the outbreak in Wuhan. During the lockdown, the Chinese government restricted access to hospitals to only patients, medical professionals and reporters,” Wu said. “Early in the lockdown when the situation was dire and chaotic and there was a severe shortage of medical supplies, many hospitals actually welcomed media exposure to help them look for help. Some of the medical teams sent from elsewhere in China to support Wuhan were also open to being filmed, partly due to their desire to have their own images documented in this historical moment.”

Despite this unprecedented access to film in Wuhan, 76 Days almost didn’t make it to production. A US network originally backed the film, but they later dropped it after the hotspots of the pandemic shifted to Europe and the US. Wu only ended up deciding to release the film himself after spending time quarantined at home.

“Quarantined for fourteen days at first in [Atlanta] with nothing to do, I started playing with the footage my co-directors had shared with me,” Wu said. “It made me cry, and it reminded me that I needed to tell a story about hope, about the human experience living through a common tragedy, about our shared humanity in this divided and scared world, in order to survive this pandemic myself.”

76 Days is not all doom and gloom, however. Lighter scenes pepper the emotional first half of the film, such as moments where the hospital’s elderly patients get up to mischievous deeds like sneaking out of their rooms. In the dark of night, drivers volunteer to take medical workers between their accomodation and hospital, showcasing how everyone in Wuhan came together to fight the virus.

As the film progresses into the second half, we see patients starting to get discharged. The flourescent lights of the hospital and outside scenes set in the night give way to bright sunshine, as we see a nurse painstakingly taking off her protective equipment. Family members are finally able to pick up the personal effects of their relatives who passed away, and start their grieving process in earnest.

By the end of 76 Days, the situation in Wuhan improved enough that some normal activity could resume outside.

In reality, Wuhan (and much of mainland China) has already returned to normal. Scenes of a party went viral in August, and Chinese residents are resuming travel (albeit within the borders of mainland China). With the virus largely contained in the country, and the majority of the global cases set elsewhere, China today offers hope and optimism for a return to normalcy.

In a world where government leaders continue to deny the seriousness of the virus, peddle quackery, and reject social distancing, it might be hard for audiences in much of the world to find reason for optimism. However, Wu hopes that through 76 Days, he can inspire some change in viewers’ minds.

“I guess my first hope is to get viewers to take COVID-19 seriously by presenting them with an unvarnished view of what happened in frontline hospitals,” Wu said. “Secondly, I’d like to remind viewers that, regardless of where one lives, we all experience fear, despair and the desperate need for human touch, for hope, living through this pandemic. So perhaps let’s stop the squabbling and the finger pointing, and instead look for a path out of this catastrophe, together.” 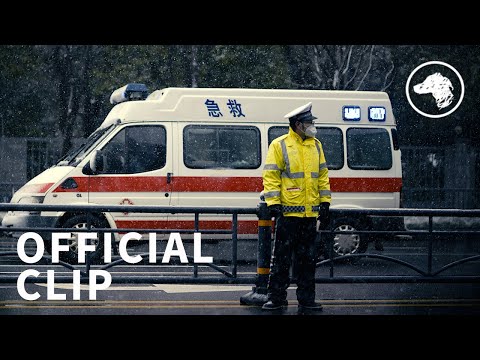 Check out more upcoming screenings at the film’s official website.

Xingting Gong contributed to the reporting on this article.